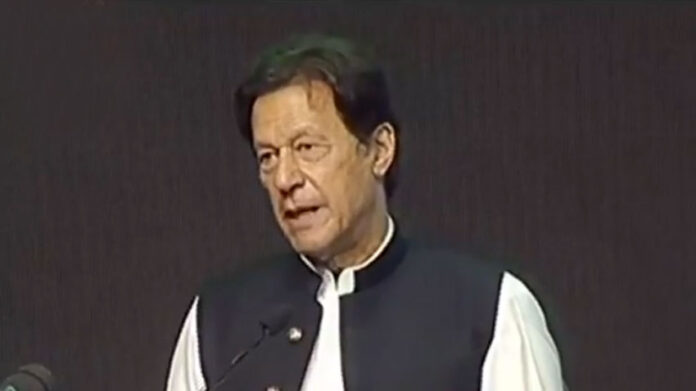 LAHORE: Prime Minister Imran Khan has vowed to win what he dubbed as a war against the mafia and expressed confidence that he’d succeed in ensuring the rule of law in letter and spirit.

“If we have to become a great nation, that was the concept [behind Pakistan’s birth], we have to ensure the rule of law,” the prime minister said while addressing the Kissan Convention in Dera Ismail Khan city of Khyber Pakhtunkhwa.

He, however, added that the people will also have to change their behaviour to become a great nation.

”It is shameful that some people residing abroad, living in the properties worth billions of rupees cannot show even a receipt of how they earned that money, and make speeches from there,” he lamented.

The prime minister said “big mafias” do not want the rule of law to establish in Pakistan because they benefit from the status quo and corrupt system, and just seek NRO (National Reconciliation Ordinance).

“If the situation persists, how will the country move forward,” he questioned.

The prime minister recalled he often referred to the state of Medina and its principles but clarified he does not do so for any political gains. “I don’t use the name of Islam for personal benefit or for a vote. It is the part of my faith,” he said.

Khan said that being a student of history, he had studied a lot about Islam, the life of Prophet Muhammad (PBUH) and the principles of the state of Medina.

He said there was a need to know, and understand, the principles adopted by the people in the first welfare state in the history of mankind which led to the fall of two powers of that era, enabling the Arabs to conquer the world in a short span.

“If we want to become an honourable nation, we have to take care of our self-respect without fear from anyone except Allah Almighty,” he remarked.

The prime minister said the state of Medina brought a revolution in the lives of its people by enforcing the rule of law and ensuring justice.