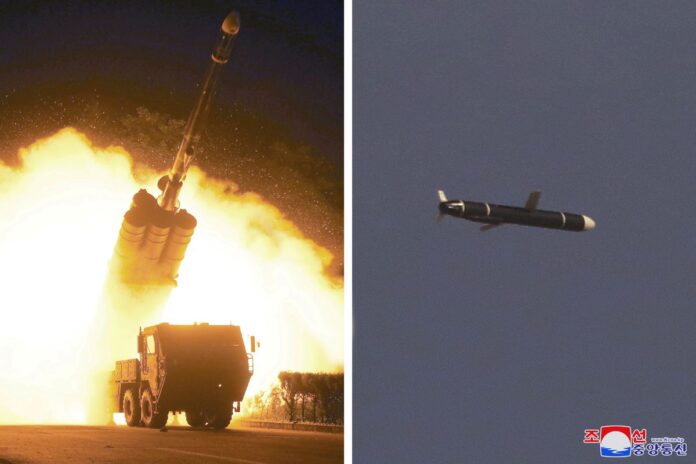 SEOUL: North Korea carried out successful tests of a new long-range cruise missile over the weekend, state media said on Monday, seen by analysts as possibly the country’s first such weapon with a nuclear capability.

The missiles are “a strategic weapon of great significance” and flew 1,500 km (930 miles) before hitting their targets and falling into the country’s territorial waters during the tests on Saturday and Sunday, KCNA said.

The latest test highlighted steady progress in Pyongyang’s weapons programme amid gridlock over talks aimed at dismantling the North’s nuclear and ballistic missile programmes in return for US sanctions relief. The talks have stalled since 2019.

“This would be the first cruise missile in North Korea to be explicitly designated a ‘strategic’ role,” said Ankit Panda, a senior fellow at the US-based Carnegie Endowment for International Peace. “This is a common euphemism for the nuclear-capable system.”

It is unclear whether North Korea has mastered the technology needed to build warheads small enough to be carried on a cruise missile, but leader Kim Jong Un said earlier this year that developing smaller bombs is a top goal.

The two Koreas have been locked in an accelerating arms race that analysts fear will leave the region littered with powerful new missiles.

South Korea’s military did not disclose whether it had detected the North’s latest tests but said on Monday it was conducting a detailed analysis in cooperation with the United States.

The US military’s Indo-Pacific Command said it was aware of the reports and was coordinating with its allies and partners.

“This activity highlights (North Korea’s) continuing focus on developing its military program and the threats that poses to its neighbours and the international community,” INDOPACOM said in a statement.

Rodong Sinmun, the ruling Workers’ Party’s official newspaper, ran photos of the new cruise missile flying and being fired from a transporter-erector-launcher.

The test provides “strategic significance of possessing another effective deterrence means for more reliably guaranteeing the security of our state and strongly containing the military manoeuvres of the hostile forces,” KCNA said.

It was seen as the North’s first missile launch after it tested a new tactical short-range ballistic missile in March. North Korea also conducted a cruise missile test just hours after US President Joe Biden took office in late January.

Jeffrey Lewis, a missile researcher at the James Martin Center for Nonproliferation Studies, said intermediate-range land-attack cruise missiles were no less a threat than ballistic missiles and were a pretty serious capability for North Korea.

“This is another system that is designed to fly under missile defence radars or around them,” Lewis said on Twitter.

Cruise missiles and short-range ballistic missiles that can be armed with either conventional or nuclear bombs are particularly destabilising in the event of conflict as it can be unclear which kind of warhead they are carrying, analysts said.

Kim Jong Un did not appear to have attended the test, with KCNA saying Pak Jong Chon, a member of the Workers’ Party’s powerful politburo and a secretary of its central committee, oversaw it.

The reclusive North has long accused the United States and South Korea of “hostile policy” toward Pyongyang.

The unveiling of the test came just a day before chief nuclear negotiators from the United States, South Korea and Japan meet in Tokyo to explore ways to break the standoff with North Korea.

China’s foreign minister, Wang Yi, is also scheduled to visit Seoul on Tuesday for talks with his counterpart, Chung Eui-yong.

Biden’s administration has said it is open to diplomacy to achieve North Korea’s denuclearisation, but has shown no willingness to ease sanctions.

Sung Kim, the US envoy for North Korea, said in August in Seoul that he was ready to meet with North Korean officials “anywhere, at any time.”

A reactivation of inter-Korean hotlines in July raised hopes for a restart of the negotiations, but the North stopped answering calls as annual South Korea-US military exercises began last month, which Pyongyang had warned could trigger a security crisis.

BRUSSELS: The European Union will focus on humanitarian aid as it figures out how to deal with the Taliban, aiming at an informal arrangement...
Read more
Top Headlines

UNITED NATIONS: Warning of a potential new Cold War, the head of the United Nations implored China and the United States to repair their...
Read more
World

The US government aims to begin offering Covid-19 vaccine booster shots next week to Americans aged 16 and up. A panel of outside advisers...
Read more
World