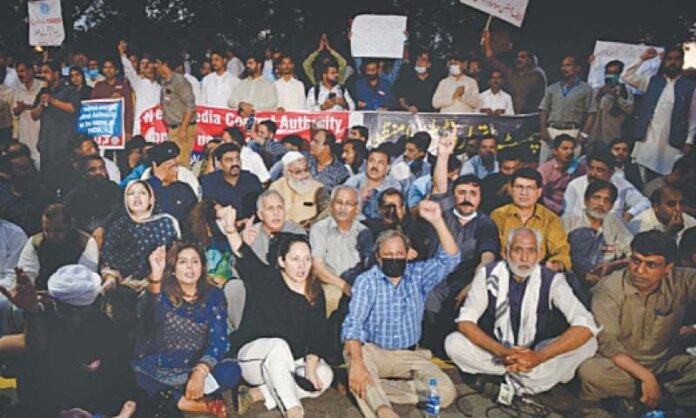 Pakistan People’s Party Chairperson Bilawal Bhutto-Zardari and Pakistan Muslim League-Nawaz senior President Shehbaz Sharif on Monday joined the protesting journalists and the other opposition leaders who had been holding a sit-in outside the Parliament House since Sunday as a demonstration against the government’s proposed Pakistan Media Development Authority.

Several politicians, including Senator Sherry Rehman and Raza Rabbani of the PPP, visited the protest camp on Monday and addressed the protesters while other politicians, such as former prime minister Shahid Khaqan Abbasi, PML-N Information Sec­retary Marriyum Aurangzeb and MNA Mohsin Dawar had visited the site a day prior.

PPP Chairperson Bilawal Bhutto-Zardari addressed the protest, saying that journalists in the country had bravely fought against and defeated former president Pervez Musharraf in the past, and they would also put up a fight against the incumbent government and its decisions challenging media freedom.

“I believe as far as the legitimacy of the government and media freedom are concerned, all [of us] are on the same page,” he added.

The PPP chairperson said he saw the PMDA as a continuity of measures taken in the past to place curbs on the media.

“Some people don’t want journalists to think freely and struggle for media freedom. We should not yield to them, and nobody will be able to infringe upon our rights,” he said.

He further stated that in present times, countries had been using the media as a tool to attack their rivals and to tackle the issue in Pakistan, media here needed to be empowered.

Bilawal said independent media was vital for societal improvement, adding that “we will resist any move to gag the media through [the PMDA] legislation”.

He told the protesting journalists that he would approach all relevant forums to oust Prime Minister Imran Khan’s government.

PML-N President Shehbaz Sharif too railed against the bill, terming it a “black law” and expressing solidarity with journalists.

“The government doesn’t have the guts to pass it and we won’t allow it,” he thundered. Shehbaz warned the government against passing the “black law” otherwise it would have to bear the consequences.

He said the media had a fought a war for its freedom and no one could snatch it . The PML-N president added that he would protest the issue with other opposition leaders in the National Assembly and try to achieve consensus with PPP and other political parties.

Addressing the protesters, Iqbal lambasted the Pakistan Tehreek-i-Insaf government for “attacking and attempting to muzzle” the media.

Referring to the PMDA bill, he dubbed it a “conspiracy” and said if the bill was passed, “democracy will die in this country”.

The PML-N leader vowed to resist the “fascist law”.

Expressing solidarity with journalists, he added, “You (journalists) have survived gunshots, kidnappings and economic murder as you were fired from your jobs, but you didn’t stop speaking the truth and I salute you for this.”

He recalled that journalists had also staged protests when the PML-N was in the government.

“But we took it sportingly,” Iqbal added.

Meanwhile, police remained deployed outside the Parliament House as a security measure.

Journalist Hamid Mir plans to host a talk show at the site of the sit-in.

The protest call was given by various journalist bodies, headed by the Pakistan Federal Union of Journalists.

Meanwhile, the Parlia­mentary Reporters Association had also announced that reporters would boycott the presidential address in protest against the proposed media authority.

A day earlier, PML-N leader Shahid Khaqan Abbasi, while speaking to the journalists, had said that while journalism is becoming more and more independent across the globe, the opposite is happening in Pakistan.

“Laws regarding how to control the press are being introduced in Pakistan under the guise of the PMDA,” Abbasi said, adding that if the government had some problems with the content being aired by different channels, then merely phoning the channel concerned would have been enough instead of creating an entity like PMDA.

The former premier went on to say that in countries where the press is not free, its citizens are not free either.

“It is the constitutional right of the people of the country to express their views; we are not talking about politics here,” Abbasi said. “Was the Pakistan Electronic Media Regulatory Authority not enough that we needed another media authority?”

He said that different military dictators that ruled Pakistan — from Ayub Khan to Pervez Musharraf — made efforts to suppress the press, adding that the incumbent Pakistan Tehreek-e-Insaf government is following the same path by trying to silence journalists.

“Today, policemen are standing with sticks in their hands to stop journalists [from protesting]” Abbasi pointed out. “An attempt is being made to bring such a law to suppress the truth.”

Similarly, his party mate and PML-N spokesperson Marriyum Aurangzeb said that the PTI-led government’s proposed media authority law is “not only devised to suppress journalism but it is an attempt to eliminate journalists.”

“The government has made a dictatorial move and the PML-N stands in solidarity with the journalist community against it,” she said.

On the occasion, Pakistan People’s Party leader Shazia Marri said that the PMDA is solely proposed to control the media.

“All opposition parties reject the PDMA bill,” Marri maintained. “Sadly, the information minister continued to lie that the PFUJ had been supporting the bill.”

“You cannot resort to policing [freedom of speech],” she said to the government. “We reject this media martial law”.

Meanwhile, the Human Rights Commission of Pakistan also expressed solidarity with the Pakistan Federal Union of Journalists and, in a statement, said that “PMDA is a draconian law”

“The PMDA bill is PTI government’s attempt to further stifle freedom of expression in the country,” the HRCP said in a statement.