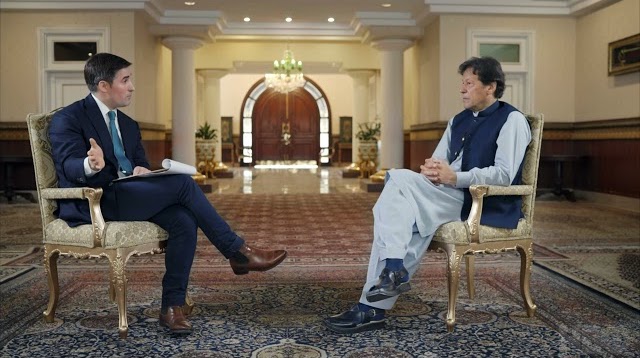 ISLAMABAD: The government of Pakistan has sought clarification from the American TV channel HBO on what it called ‘the censorship’ of the recent interview of Prime Minister Imran Khan wherein PM’s remarks on the ideology of India’s ruling Hindutva regime was criticized.

According to an informed source, a letter has been written by the External Publicity Wing of the Ministry of Information and Broadcasting to the HBO management seeking clarification on the censorship of the PM’s interview on Indian Hindutva ideology.

The source said that the federal government has sought clarification from HBO asking why was the statement on Hindutva ideology was deleted from the Prime Minister’s interview?

Similarly, Special Assistant for Political Relations Shahbaz Gul has also confirmed that a letter has been written to the American channel HBO on behalf of the EP wing to censor part of the interview of PM Imran Khan. He said that Prime Minister Imran Khan said that when he became the Prime Minister, he extended his hand to the Indian Prime Minister Modi for peace. In 2019, India unilaterally changed the legal status of Indian Illegally Occupied Jammu and Kashmir.

“My purpose in entering politics is to eradicate poverty and establish a welfare state. Until India withdraws its August 5 measures, talks are not possible,” the prime minister was quoted as saying. He further said that Pakistan’s nuclear program is only for deterrence as Pakistan wants peace and tranquility in the region.

ISLAMABAD: The Canadian government has more than doubled the amount of donations it will match to help the people of Pakistan recover from disastrous...
Read more
NATIONAL

ISLAMABAD: The United States government has delivered an additional batch of eight million Pfizer Covid-19 pediatric vaccine doses to Pakistan. According to the US Embassy...
Read more
NATIONAL

Pakistan Tehreek-e- Insaaf (PTI) leader Fawad Chaudhry on Friday claimed that people know "where and how such audio clips are being created" as he...
Read more
NATIONAL

ISLAMABAD: The National Assembly on Friday passed two government bills and referred four bills as well as an ordinance to the relevant committees. The bills...
Read more
NATIONAL

SHIMSHAL, PAKISTAN: An Austrian mountaineer was killed and another injured after they were caught in an avalanche Thursday in northern Pakistan, according to police. They were...
Read more
- Advertisment -