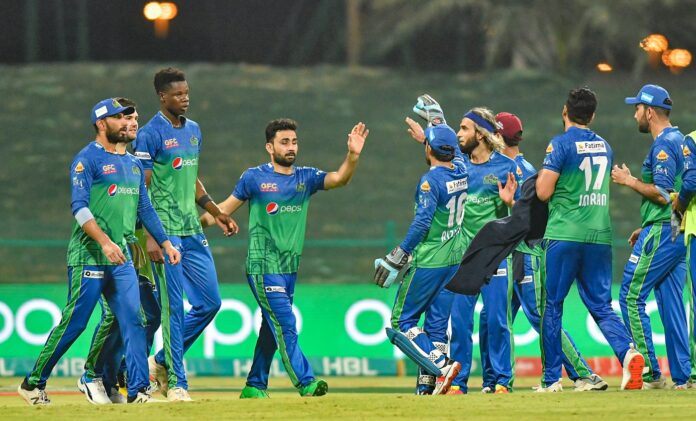 ABU DHABI: Multan Sultans defeated Islamabad United by 31 runs and reached to the HBL Pakistan Super League 2021 final, scheduled to be held on Thursday, ESPNcricinfo reported.
The win in the first qualifier also put aside their dubious record of being the only PSL side without a final appearance so far; league-toppers United head into the second eliminator on Tuesday for another shot at the finals.
Sultans were set in motion by Sohaib Maqsood after they elected to bat, gained momentum after a slump though Johnson Charles’ cameo, and finished strong with a blitz from Khushdil Shah who hit four sixes in the 19th over to help them post 180.
In chase, United were three down before their powerplay was halfway through and never really recovered. Sohail Tanvir had only one wicket in the season before the game, but this three-for proved timely, and the experience of Imran Tahir – and his two wickets – meant that any potential scares from United’s lower order were safely handled.
United probably aren’t intimidated by most totals given their campaign so far, but Tanvir certainly put the fear in them with the new ball. Colin Munro walked down the pitch to him, first ball, in an effort to negate his inswingers – only to york himself and have middle stump tonked.
Tanvir then had Shadab Khan lunging at a slower delivery to be caught at point; in between it all, No. 3 Muhammad Akhlaq was sent back with a direct hit from Imran Khan at short fine leg. United were 14 for 3 in the third over; historically, not a lot of teams have won in this format after losing that many wickets in the powerplay. And that would eventually be the case for United.
Khawaja was the only batter – even during the collapse – to have a plan to score, using characteristic touch play to minimise risk and still find boundaries. But the chase did hinge on whether he could take the innings deeper with Iftikhar Ahmed and Asif Ali, the two other experienced batters in the side, and that wasn’t to be. Iftikhar was done by bounce trying to cut Blessing Muzarabani, and Asif walked past Imran Tahir’s legbreak to be stumped.
At 61 for 5, the chase was all but done. Khawaja did open up – getting 18 off four Muzarabani deliveries at one point – and the batting depth meant United did throw in a late flourish. But the damage at the top was too much to overcome.
Mohammad Rizwan’s decision to bat first didn’t begin well on a personal front; he was adjudged caught behind off the glove – on review – for a duck. But a tight first two overs from United was only a temporary win as Maqsood stamped himself on the game next over onwards, starting Faheem Ashraf’s over with a dominant slap over extra cover and following it up with two more perfectly timed drives. It was the first indication that this was a pitch that assisted boundary-scoring.
The next few also came from Maqsood’s bat, in the form of two sixes over square leg, one off the front and one of the back foot. While Shan Masood was kept quiet at the other end, the scoring rate did stay up – they finished the powerplay on 44 for 1.
Any indications of the pitch being a pure belter were put to doubt when Shadab brought himself on. After being pulled through midwicket off his first two balls – in the first instance, literally through Hasan Ali’s legs – he got one to rip back into Masood and trapped in front. Two balls later, Rilee Rossouw played for the googly on the front foot and was also trapped lbw – on review – when the legbreak caught him in front of middle. Sultans were suddenly 59 for 3 after a budding partnership of 53 had stabilised them.
But Johnson Charles was in the mood for attack – and it showed from his first ball, when he brought out a controlled sweep against Shadab for four. From there, he took on the aggressor’s role. A knock of 41 off 21 balls, with a boundary almost every over he was in, and three slogged sixes took Sultans to 122 in the 15th over before he was dismissed.
Maqsood eventually holed out in the 17th over, and United seemed to have pulled things back – only eight runs came off the eight balls after his dismissal. But the 19th over went woefully wrong as Khushdil hauled them from 145 to 174, with four sixes in a row against Akif Javed; three of them swung over the leg side, and one ending up at third man as he looked to swing it over the leg side. It was the finish Sultans needed after seemingly falling away on a good pitch.