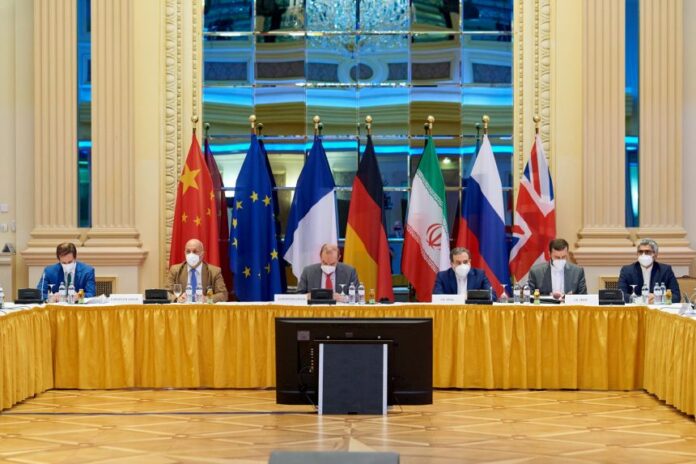 TEHRAN: Western officials warned Tehran on Sunday that negotiations to revive its nuclear deal could not continue indefinitely after the sides announced a break following the election of a new hardline president in Iran.

Negotiations have been ongoing in Vienna since April to work out how Iran and the United States can both return to compliance with the nuclear pact, which Washington abandoned in 2018 under then-President Donald Trump, and Iran subsequently violated.

Sunday’s pause in the talks came after Ebrahim Raisi, a hardliner and fierce critic of the West, won Iran’s presidential election on Friday. Two diplomats said they expected a break of around 10 days.

Raisi will take office in early August, replacing pragmatist Hassan Rouhani, under whom Tehran struck the deal agreeing to curbs to its nuclear programme in return for the lifting of international sanctions.

Still, some Iranian officials have suggested that Tehran could have an interest in pushing through an agreement before the new president takes office in August, to give Raisi a clean slate.

An Iranian government official close to the talks told Reuters that if a deal is finalised before Raisi takes office, the new president will be able to deflect blame for any concessions onto his predecessor: “Rouhani, not Raisi, will be blamed for any future problems regarding the deal,” he said.

Britain, France and Germany, the European “E3”, have effectively been acting as mediators, shuttling between the Iranian delegation and a US team that — Washington having quit the pact — is not a formal participant.

The Western countries say the longer Iran violates the deal and produces banned nuclear material, the harder it becomes to restore the pact.

“As we have stated before, time is on nobody’s side. These talks cannot be open-ended,” E3 diplomats said in a note sent to reporters, adding that the most difficult issues still need to be resolved.

US National Security Adviser Jake Sullivan echoed those comments telling broadcaster ABC News that there was still “a fair distance to travel”, including on sanctions and on the nuclear commitments that Iran has to make.

With the talks on pause, attention will now turn to extending a separate accord between Iran and the UN nuclear watchdog IAEA, which expires on June 24. Iran has ended extra monitoring measures that were introduced under the 2015 deal.

EU political director Enrique Mora, who is coordinating the nuclear talks, said he expected an extension that would let data continue to be collected while placing limits on the IAEA’s access to it for now

RAISI UNDER US SANCTIONS:

While the rise of a hardliner to succeed Rouhani was expected, it could play into the hands of the deal’s opponents on the right in the United States, and in Israel and Arab countries, who say Iran is not reforming and not trustworthy.

On Sunday Israel’s new Prime Minister Naftali Bennett said a Raisi government would be a “regime of brutal hangmen” with which world powers should not negotiate a new nuclear accord.

Raisi is under US sanctions over a past which includes what the United States and human rights groups say was the extrajudicial killing of thousands of political prisoners in 1988. He has never publicly addressed such allegations.

Raisi, like Ayatollah Khamenei, has supported the nuclear talks as a route to cancelling US sanctions that have wrecked Iran’s economy. Several Iranian officials said the current negotiating team would remain intact for the next few months.

“Who Raisi picks as his foreign minister will reveal the new government’s foreign policy approach,” said another official, reiterating that nuclear policy was decided by Ayatollah Khamenei.