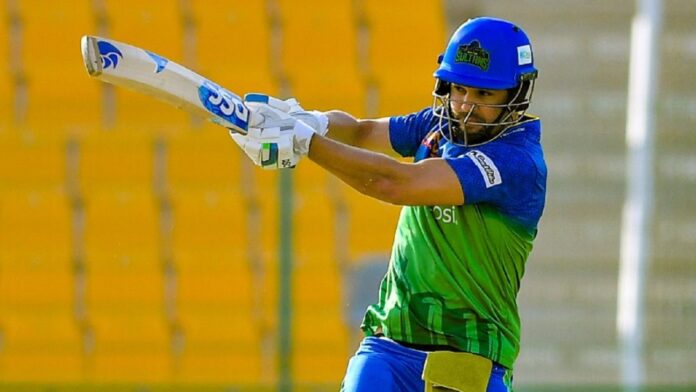 ABU DHABI: Despite Babar Azam’s best efforts (85* off 63) and Chadwick Walton’s added contribution (35 off 23), Karachi Kings could not break their win-lose sequence of this season, succumbing to their third defeat in six games. Multan Sultans, who went into this fixture with just one win in five matches, were carried to an above-par total of 176/5 by a collection of batting performances, before the bowlers did just enough to eke out a victory.

Azam made a rather scratchy start to chase, going as many as nine balls without scoring his first run as Karachi Kings struggled at the beginning. That was accentuated by the ill-luck that brought a runout at the non-striker’s end. Azam’s straight drive off Imran Khan crashed onto the stumps at the non-striker’s end after clipping the bowler’s finger, and caught Sharjeel Khan well short of his crease. Azam shrugged off his early batting lethargy with a not entirely-convincing pull shot over deep square leg for a six on the fifth over. Despite that, Kings had dragged their feet only to 31 for 1 in the PowerPlay overs.

Azam batting in the middle-overs in the company of the experienced Martin Guptill was expected to give the chase a bit of steam, but Guptill’s exit in the 10th over (for 11 off 16) and Najibullah Zadran’s in the 12th (for 11 off 6) left the team well behind the eight-ball.

Azam brought up one of his most laborious half-centuries – off 48 balls – in the 14th over as Kings crawled to 92 for 3, left to chase 85 off the last 36 balls. And yet, the Azam-Chadwick Walton stand came agonisingly close to turning the tables on Multan Sultans in late, dramatic fashion.

The pair dealt in sixes and ones and twos to keep up with the ever climbing required rate. Despite those efforts they still needed 50 off the last three overs, which was brought down to 36 off 12 balls. Azam began the penultimate over with a six and a four, but Sohail Khan made an exceptional comeback in the over to give away just three more runs and dismiss Walton. Imran Khan then picked three wickets to deny Azam an opportunity to score 23 off the last over and snatch the game away from under their noses.

Before the bowlers could somehow hold on, Multan Sultans were ushered ahead by the efforts of the top-order, despite the early exit of Rahmanullah Gurbaz. Sohaib Maqsood provided the Sultans with some batting impetus as he went after Imad Wasim in a 21-run over. He fell in the next, but an early platform had been laid down for the batting side. Rilee Rossouw and captain Mohammad Rizwan then rebuilt the side while keeping the scoring rate upward of 10-an-over. But the Sultans stumbled from a 10-over score of 107 for 2 as both the set batsmen departed in the 11th over.

Sultans needed another repair work and Khushdil Shah put his hand up for it. The onus of doing the majority of the work fell on his shoulders as Shimron Hetmyer couldn’t last long. A late flourish, led by Khushdil’s onslaught against Amir in the 20th over, took Sultans to 176/5, a total big enough to secure them all the points on the day.