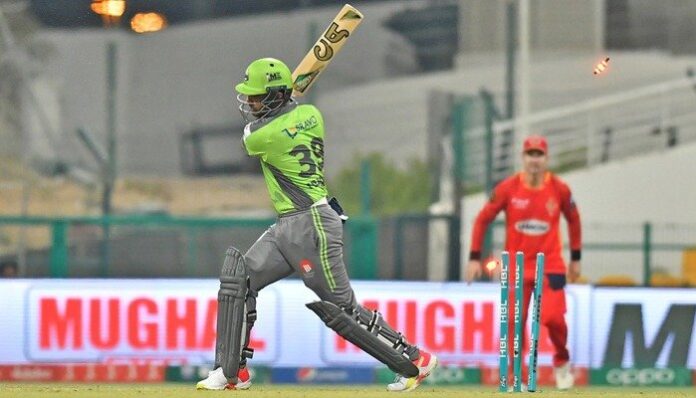 Rashid Khan’s consecutive boundaries in the final over helped Lahore Qalandars on Wednesday defeat Islamabad United by 5 wickets in a nail-biting contest in the opening match of the second leg of the Pakistan Super League’s (PSL) sixth edition at Sheikh Zayed Stadium in Abu Dhabi.

Qalandars’ skipper Sohail Akhtar has been leading from the front, as he scored 40 runs — the highest individual score in the innings so far — before being dismissed by Fawad Ahmed.

Faheem Ashraf, Hasan Ali, Shadab Khan, and Fawad Ahmed have taken a wicket each so far.

Islamabad United had set a 144-run target for Lahore Qalandars. None of United’s players, except Faheem Ashraf, 27, were able to score above 20 runs.

United put up a mediocre batting effort as their top order — Usman Khawaja, 18, Colin Munro, 11, Rohail Nazir, 8 — could not produce much, and neither could the middle order.

Colin Munro and Usman Khawaja opened for United, with Shaheen Shah Afridi opening the bowling for the Qalandars.

James Faulkner took three wickets, Haris Rauf and Ahmed Daniyal two each, and Shaheen Shah Afridi and Rashid Khan were able to pick a wicket each.

The Qalandars were able to keep their blowing and fielding tight as they were able to restrict United to a struggling 143.

This is the first match of PSL 2021 where both the teams are going head-to-head.

Islamabad United had won 3 out of 4 matches and was above Lahore Qalandars on the basis of Net Run Rate (NRR) on the points table before the tournament was halted.

United have the upper hand as they have won 8 out of 10 PSL matches against Lahore Qalandars — who have won just two.

Speaking to a local news outlet last week, United’s skipper Shadab Khan had said the team would try to continue the momentum from the last games. He said that the results were not in their control so they were not worried about it.

“Efforts are in our hands, and we’ll leave no stone unturned with that,” vowed Shadab.

The skipper had said that his team seeks to win the first match against Lahore Qalandars and maintain that momentum in future games.

“Our squad looks good with the return of Munro and drafting of Brandon King and Usman Khawaja. We have a good combination,” said the captain.

Meanwhile, the Qalandars’ skipper Sohail Akhtar had said his side “will pick up where we left off”.

The Qalandars were in good form earlier in March and had got six points after three of its four matches before the league was halted.

“We are in good shape and have got all the ingredients required for a successful T20 side. Usually, sides with good bowling action do well in leagues around the world and we have the best bowling attack. We also have good batsmen,” the captain had said.

Intense fighting in the northern Afghan province of Kunduz killed at least 28 civilians and injured 290 this week, according to hospital officials, as...
Read more
- Advertisment -