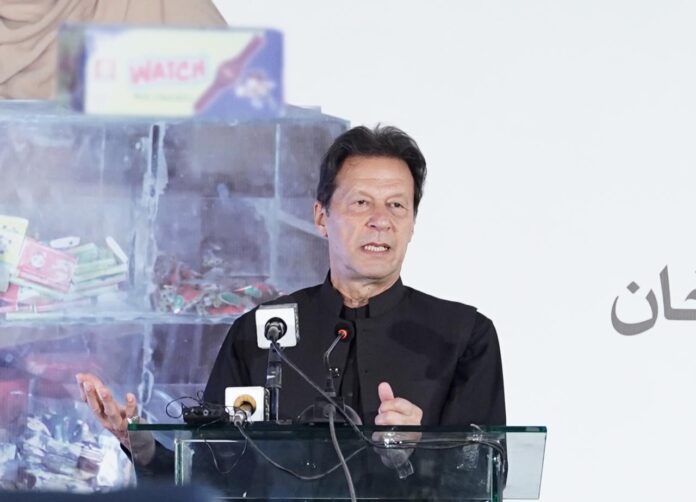 Addressing the gathering during the launch of the Ehsaas Saving Wallets programme, the prime minister said no nation could progress until it empowers its weaker social groups.

The initiative, an essential component of Ehsaas Financial Inclusion Strategy, was launched by the prime minister during the visit of Queen Máxima of the Netherlands in 2019.

The prime minister said the saving wallets programme was in line with the universal fact that the inclusion of women in the financial system could help them run independent businesses and save money to overcome the economic woes.

He said the Ehsaas programme was acknowledged by World Bank as the fourth effective welfare initiative to provide a safety net to the poor and deserving during the coronavirus.

Imran said across the world, the pandemic pushed millions of people below the poverty line, however, Ehsaas succeeded in reaching out to the poor inspired by the principles of compassion of the State of Medina.

He thanked Queen Máxima for coming to Pakistan as a Special UN Advocate for Inclusive Finance for Development and support the project, aimed at the financial empowerment of women.

The prime minister mentioned that Pakistan also desired to follow the model of China that helped 700 million people come out of extreme poverty.

He expressed confidence that the latest initiative would prove to be an effective step towards helping households in managing their finances better and meet emergency needs and invest to increase their earnings.

On the occasion, Dutch ambassador Wouter Plomp read out the message of Queen Máxima, expressing her satisfaction with the implementation of the drive.

The prime minister interacted with beneficiary women of the wallet programme and issued directions to resolve their grievances.

Adviser to the Prime Minister on Poverty Alleviation Dr Sania Nishtar said the initiative would lead to digital and financial inclusion of women and open avenues for them to take better advantage of opportunities offered under the Ehsaas initiative.

She said globally, there were examples of economies that had encouraged a mindset shift towards savings and had reaped its benefits.

Kenya, she mentioned, had introduced mobile money transfers, resulting in savings increase of 22 percent in the beneficiary households, and helped lift 2 percent of these households out of extreme poverty.

She said Argentina transitioned from cash handouts to account transfers for a national anti-poverty programme, and the transition was found to reduce corruption.

On cash payments, she said, four percent of recipients reported paying kickbacks to people or organisations that helped enroll them in the programme. On the other hand, when the payments were made directly into accounts, the number dropped to just 0.03 percent.

Sania also mentioned Bangladesh as an example of how digital savings accounts were used to change the nature of government-to-person programmes from social protection to social investment using financial literacy campaigns.

She said the seven goals of socio-welfare importance under 270 projects of Ehsaas were actively being carried out with weekly and monthly reviews in line with the 32 covenants.

The programme is making headways keeping in view the areas of transparency and audit, information security, data governance and financial control, she added.

She also mentioned that a national Ehsaas survey was 88 percent completed and announced that its first one-window operation centre would soon be opened at the Sitara Market in Islamabad.

She also gave a snapshot of the overall achievements under the umbrella of Ehsaas programme: the undergraduate scholarship, emergency cash programme, primary, secondary and undergraduate educational stipends, nashunuma programme to check stunting in 15 districts, the establishment of 35 soup kitchens out of 112, and the orphanages and shelter homes with one-star bed and breakfast facility.

Sania further said a programme had been designed in collaboration with the National Bank of Pakistan to give soft loans to small grocery shop owners.

The latest programme will deepen the financial inclusion initiated under the “One Woman, One Bank Account” policy.

The design of the savings bank account is simple in the following ways: the accounts are targeted to Kafaalat beneficiaries, beneficiaries can open these accounts at agent shops or ATMs, and initial transactions through these accounts will include balance inquiry, cash in and cash out, transfer funds received from Ehsaas to mobile accounts, mobile top-up, utility bill payments, and money transfers.

Additionally, the accounts will also offer savings on deposits.

May 23, 2022
Does man possess free will to choose his course of action? Does God know all along everything that is ever going to happen? If...