A dangerous path to tread 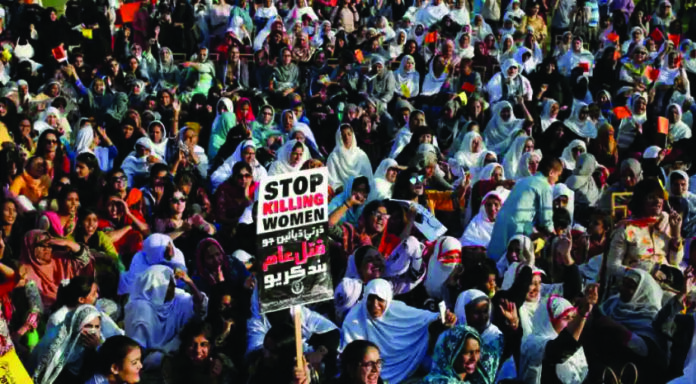 The annual Aurat March continues to be targeted with unsubstantiated allegations, and scandalized by, as experts call then, upholders of patriarchal inertia. This year, however, the Aurat Match received unprecedented backlash.

The opposition of the march used the religious tool, which observers note is the most dangerous one to target someone in Pakistan. It is the same tool which has killed students like Mashal Khan, and which led to the killing of former Punjab governor Salman Taseer.

The charge of blasphemy has been used to silence many in Pakistan. The Islamist adversaries of the Aurat March accused the organizers of having disrespected Allah and the Prophet (PBUH), mentioning two specific incidents. One of them was based on a doctored video, which was circulated on social media.

The video, which has since proven to have been fabricated, claimed that participants of the march were raising anti-Islam slogans. The leading voice in this allegation was of a senior journalist. He said, “I cannot even describe what has been done in Aurat March, but this is for sure, the government should not only ban Aurat March but also arrest the organizers.” He further claimed that “very dangerous material” has become public with regard to Aurat March. He appealed to the federal and Sindh governments to investigate the issue and if it is true, those responsible should be arrested.

A storm on social media pushed demands for action against Aurat March, based on the video. Rights activists and the official Aurat March Twitter handle shared the original video proving the fabrication. Digital rights activists point out that the spread of the material without verification underlines the fast growing trend in the virtual sphere. Human rights activists have condemned the barefaced targeting of the Aurat March.

Experts underline the danger of this trend of using blasphemy to silence women’s rights activists is a decade-old ploy of Islamists. They say that Islamist policies have long silenced marginalised segments in the country, including women.

“We all remember the case of Mashal Khan. It’s sad and worrying to see some well-known media persons becoming a source of spread of malicious propaganda against Aurat March organisers by sharing edited videos without verification,” said rights activist Jibran Nasir.

Meanwhile, Aurat March Twitter handle wrote: “Misinformation is the tool of those individuals and groups who seek to weaken the feminist movement and silence the voices of those who are marginalized.” After the uploading of the original video, march organizers demanded a public apology from Ansar Abbasi and others who circulated the doctored video. “The malicious campaign against Aurat March and Aurat Azaadi March has caused irreparable harm to individuals and the movement. We demand that all those part of this disinformation campaign ApologizeToAuratMarch NOW!”

Meanwhile, actors, politicians and other activists also demanded an apology from those responsible for spreading the fake video. The Human Rights Commission Pakistan (HRCP) has also issued a statement: “This is not just repugnant; it is an incitement to violence. We demand that action be taken against all such persons.” After a serious backlash, Ffederal Relligious Affairs Minister Noorul Haq Qadri promised an action against the people who did this. “The characters [who are] involved in it will be exposed and cases will be made [against them],” he said.

Despite the social media awareness campaign and the rightful demands for apology, retraction and clarification, none came. Experts say this was because it is easy to accuse someone of blasphemy in Pakistan, but accepting the responsibility and apologizing over false allegations is not the norm the people follow here. Observers noted that Ansar Abbasi, for instance, simply explained that he hadn’t said that Aurat March participants had done something wrong, he had simply pointed out an issue.

Despite the clarifications and proof that video was doctored, a Peshawar court has ordered the filing of a case against Aurat March organizers for blasphemy. An additional judge has ordered the police to register a case on a petition by a local lawyer.

Experts underline the danger of this trend of using blasphemy to silence women’s rights activists is a decade-old ploy of Islamists. They say that Islamist policies have long silenced marginalised segments in the country, including women.

No more out of reach of terrorists

Two years of peace after the May 2019 terrorist attack had provided a sense of security to the people of Lahore. Many had come...
Read more
Editorials

Punjab Assembly Speaker Ch Pervaiz Elahi’s call on ex-President and PPP Co-Chairperson Asif Zardari was supposed to be to thank him for the support...
Read more
Letters

This letter refers to those areas of Turbat which do have schools, but don’t have teachers. I mean to say that teachers are getting...
Read more
Letters

Recently, the Punjab government ordered that the wife of a prisoner can stay with her husband for three days every three months for which...
Read more
Letters

Toxic waste, chemical waste material capable of causing death or injury to life. Waste is considered toxic if it is poisonous, radioactive, explosive, and...
Read more