Has India inculcated a “scientific temper”?

Has a constitutional duty been neglected 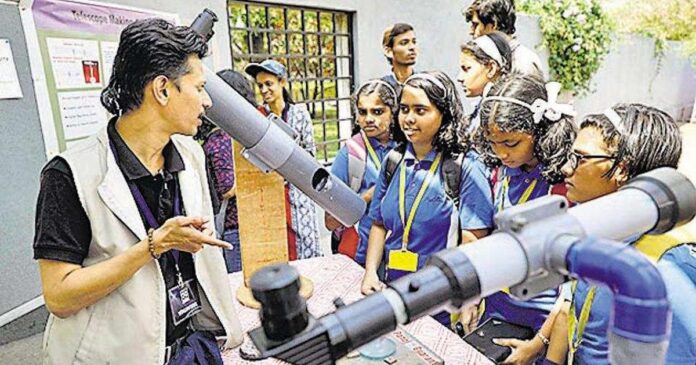 The Indian Constitution is the only, according to which it is a fundamental duty, the eighth one, of every citizen “to develop a scientific temper, humanism, and the spirit of inquiry and reform” (Article 51A).

But, it appears that even after seven decades of independence, Indians are still mired in superstition. The world was stunned to see the televised appearance of India’s defence minister Rajnath Singh emblazoning a Rafale fighter jet with an ‘om’ sign and decking it with flowers, coconut and lemons, purportedly to ward off the evil eye. Singh’s overt show of religiosity caricatured the provision of India’s Constitution mandating the duty of inculcating a “scientific temper”.

Nehru dreamt of a nation whose citizens would be able to think independently, understand and practice scientific methods in their daily lives, analyse and take informed and calculated decisions rather than taking statements at their face value and avoid simplistic reasoning. Even after seven decades, his nation is still mired in superstition, and myths disguised as religion

Muslims and dalits practise cow slaughter and carry on small-scale beef trade. To persecute them and to deprive the beef-eating minority of a cheap source of food,  Adityanath launched a crackdown on them in June 2020. He directed his administration to book the “offenders” under India’s National Security Act. Simultaneously, he approved an ordinance to increase the penalty for cow slaughter up to 10 years imprisonment and a fine up to Rs 500,000.

Under the NSA a person can be detained without charge for up to 12 months if a threat to national security or law and order.

Last October, the Allahabad High Court expressed ennui at the “frequent misuse” of provisions of the Uttar Pradesh Cow Slaughter Act, 1955, and noted it was being used to implicate innocent people. Adityanath adamantly responded that his government will “protect cows at any cost”.

The furious yogi ordered cow-related offences tried under the National Security Act. The sycophant police registered 139 cases against innocent people under it between January 2018 and December 2020. But, the court rejected most cases for “non-application of mind.” Besides cow-related NSA cases, during 2020, until August 26, 1716 cases were registered under thePrevention of Cow Slaughter Act and over 4000 arrested.

The Yogi wants to convert Ayodhya into a Vatican, a Mecca. He wants to re-name the Mughal Museum in Agra after Maratha king Shivaji. He rejected proposals to build both a mosque and a temple at Ayodhya side by side.He refused to attend the inauguration of a mosque away from Ayodhya in exchange for the demolished Babri Masjid.

The Hindu Supreme Court validated demolition of the Babri masjid. The Supreme Court chief justice, Ranjan Gogoi, was inducted, shortly after retirement,into the Rajya Sabha as quid pro quo for his pro-government decisions, including on abolition of Kashmir’s special status. The serving SC judges rejected a petition for inquiry into Gogois’ in-service conduct.

The National Crime Records Bureau omitted data on murders; burning Muslims alive, cow-related lynching and offences committed for religious reason. Hindus believe that Lord Krishna took along a cow from heavens when he descended on earth.

A black-and-white pigeon was caught on April 17 last  after it perched on the shoulder of Constable Niraj Kumar, who was on guard duty at a post in Roranwala, 500 metres from the border with Pakistan. Kumar “immediately caught the pigeon and informed Post Commander Ompal Singh”. The commander then searched the pigeon and found a paper with a number starting from 0302. The BSF directed police to lodge an FIR against the pigeon. The BSF could not decode the mysterious number, wrapped with adhesive tape on the pigeon’s left leg.  SSP Dhruv Dahiya replied to the BSF that “he did not think FIR could be registered against the pigeon as it was a bird, not a human being”.  However he clarified, ‘We have referred the matter to our legal experts for their opinion’. Last May, the BSF had captured another “Pakistani spy pigeon” and handed it over to police in occupied Kashmir. A Pakistani villager later said he was the owner of the pigeon and refuted its being “a spy or a terrorist”. Earlier, in 2015, also, a pigeon was captured by Indian forces for crossing the border into the Pathankot area.

Last month, authorities in Indian-occupied Kashmir seized a plane-shaped balloon bearing the name of PIA. The balloon, featuring the name, logo and livery colours of the national flag-carrier, was found in Sotra Chak village of Hiranagar sector. It was initially spotted by locals in the village who informed the police. Authorities then seized the balloon and the matter was entrusted to police for investigation.

“Scientific temper” of Indian judges: Mr Justice Mahesh Chandra Sharma of Rajasthan High Court flabbergasted reporters by saying in 2018 `all doctors are frauds and we could have all been cured of diseases with nothing more than cow’s milk.’ He  urged the Centre to declare cow as India’s national animal and recommended life imprisonment for cow slaughter. Physicians must have smiled at his assertions that `cow inhales and exhales oxygen’, and `a peacock is a lifelong celibate like Krishna’.

At the RSS conclave a Muslim wing distributed a pamphlet echoing Sharma’s sentiments. The RSS’s rising influence cannot be ignored. Huffington Post in 2017 published a detailed report on the benefits of cow dung-and-urine recipes like: (a) A cow dung-and-urine beauty soap could stall ageing. Krishna looked like a 12-year-old as he used such soap. (b) Cow dung and urine (gao gober and gau mutra) could prevent radiation when used to construct a bunker or rubbed on a mobile phone. This compound can defuse even an atomic bomb. (c) Pregnant women should have cow dung-urine derivatives for normal delivery.

India’s prestigious Institute of Technology received about 50 proposals from top research institutions across the country to explore the benefits of panchgavya (mixture of cow urine, cow dung, milk, ghee and curd). India’s Union Ministry of Science and Technology has constituted a 19-member panel to conduct a detailed research on cow derivatives and their benefits. Actor Akshay Kumar remorselessly admitted that he drinks cow urine daily. Cow dung is also used in Hindu religious fire (agni) yajna as an important ingredient.

India’s first prime minister Jawaharlal Nehru was an ardent advocate of the “scientific temper”. In The Discovery of India, he writes, “The scientific approach, the adventurous and yet critical temper of science, the search for truth and new knowledge, the refusal to accept anything without testing and trial, the capacity to change previous conclusions in the face of new evidence, the reliance on observed fact and not on pre-conceived theory, the hard discipline of the mind, all  this is necessary…”.

He is credited for pioneering many space and science research institutes in India. He dreamt of a nation whose citizens would be able to think independently, understand and practice scientific methods in their daily lives, analyse and take informed and calculated decisions rather than taking statements at their face value and avoid simplistic reasoning. Even after seven decades, his nation is still mired in superstition, and myths disguised as religion.