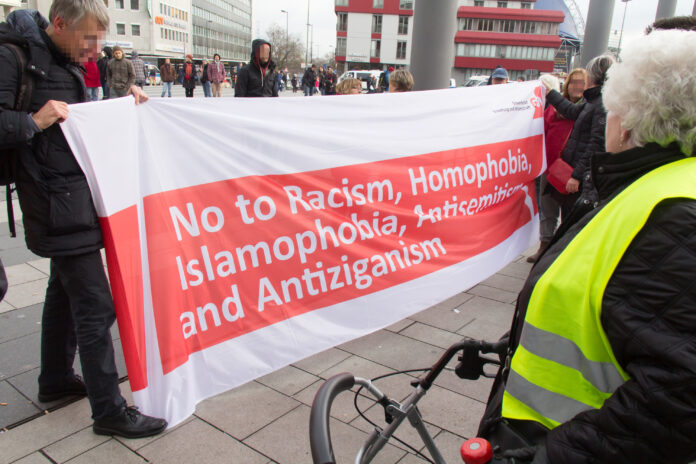 The October 2007 edition of Newsweek featured a scene from Pakistan on its cover with the title, ’The most dangerous nation in the world isn’t Iran. It’s Pakistan.’ The scene wasn’t much different from what was happening in Pakistan in the past few days. It showed a group of angry, young, scantily bearded men fiercely chanting slogans (probably against the then incumbent government). A few years later, Spain banned the building of minarets and this was followed by the infamous Burqa Ban in France….Islamophobia had begun at full throttle…

Where exactly or more importantly how exactly did this term enter the English language? Was it the work of a single entity or does it reflect the mindset of a vast majority of the world population? Imran Khan frequently attributed the origin of this phenomenon to Salman Rushdie’s novel, The Satanic Verses. He isn’t wrong to admit that this book ignited the hatred of Muslims against the West in general and the writer in particular. Most of those aggrieved took an approach that included writing essays and trying to explain to the West what was the true face of Islam. A very small minority proceeded to take up arms and vehemently demanded capital punishment for the mischievous author. The handful of those extremist Muslims began to be seen by the world at large as the true face of Islam.

Pouncing on this apt opportunity, Samuel Huntington gave his ‘Clash of Civilizations’ theory that marginalized Muslims as a group of malevolent, orthodox, and uncivilized people who were the antithesis of the very principles of democracy, liberty, and freedom of expression that the West proudly stood for. With the miscreant and nefarious activities of Al-Qaida and the so-called Islamic State, the catalyst for Islamophobia was without any doubt the travesty of 9/11. Thereafter, Muslims were viewed with contempt all over the world.

In the past two decades, the 99 percent moderate Muslims have borne the brunt of less than one percent reactionary and extremist ones. It must be noted that extremists are present in all faiths. Before the 1990s, more than 90 percent of all suicide attacks were done by Hindu Tamil Tigers. But no one labeled Hindus as a reactionary religion. In the Second World War, Japanese Kamikaze pilots were notorious for their suicide crashes into enemy military bases. Again it did not mean that the entire Japanese race was to blame for these acts. Unfortunately, a similar realization was not made in the case of Muslims.

Such an overview is necessary to build the following arguments. The old saying goes, it takes two to tango. It is without any doubt that the first step in developing this animosity towards Muslims originated in the West. Simultaneously, it won’t be wrong to suggest that the Muslims themselves did not do well to remove these misapprehensions; instead, we just warmed the fire. However, this happens to be the optimum time to educate the world at large what the true face of Islam is and it won’t be a difficult task provided we delve to understand, comprehend, and practice the beautiful faith of Islam

The crude and rudimentary understanding of Islam must be replaced with research-oriented study of the religion; one that obliges helping the poor and peacefully mitigates conflicts. This is the need of the hour. The world should know that Huntington’s theory is a farce and cannot be accepted today. The Islamic system of justice is the blueprint of the British concept of ‘Rule of Law’. Contrary to popular belief, Muslim men and women do have an equal say in the governance of their state . According to one tradition, during the election of the third Caliph, the moderator, Hazrat Abdur Rehman bin Auf even consulted the women of the time regarding their choice of the candidate. Compare this to the USA which did not give voting rights to women up till the passage of the 19th Amendment in 1920 … The best example however, would be that of the Last Sermon by the Holy Prophet (PBUH). Even after a cursory glance of the United Nations Declaration of Human Rights,one cannot miss the stark similarities it has with the Last Sermon.

If one keeps on complaining about the little thorns on a long-stemmed red rose, he will never be able to appreciate the floral and fresh scent of this beautiful flower. Similarly, the world at large should view Islam as the religion of 1.8 moderate Muslims and not a few traditionalists that made it to the cover of Newsweek more than a decade ago.

Mohammad Khalid Bhatti
The writer can be contacted at [email protected]