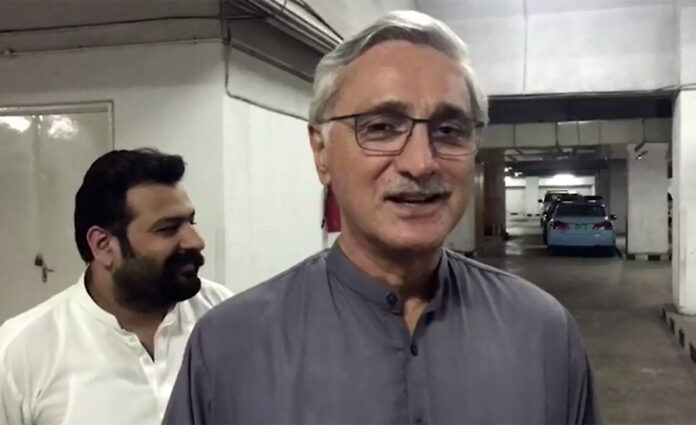 ISLAMABAD: Federal Investigation Agency (FIA) directed estranged Pakistan Tehreek-e-Insaf (PTI) leader Jahangir Tareen and his son Ali Tareen to appear on Tuesday along with the relevant record to respond to its queries.

In March, the agency registered three cases against the two, among others, on charges of corporate fraud and money laundering. Tareen rejected the “fabricated” charge sheet, denying any wrongdoing.

A press statement issued by the FIA on Monday said it was investigating the sugar baron on claims of “criminal breach of trust, financial fraud and money laundering by JDW[-Group] and its related companies JKFSL [JK Farming Systems Ltd] & FPML [Faruki Pulp Mills Ltd], since August 8, 2020”.

The FIA said that it wanted to inspect the “complete inventory, with commercial invoices wherever applicable of the plant, machinery and equipment, any fixed assets, stores, spares, and loose tools, and intangible assets owned by JKFSL as of November 20, 2013″.

In addition, the agency also expressed interest in examining the details of 35,000 acres of farmland reported to be in possession of Tareen.

The agency has directed Tareen to share the details of his foreign assets in the UK and elsewhere in the world, including Hyde House, situated on Hyde Lane in Ecchinswell, a small village in Hampshire County.

The FIA said that the house was mentioned by Tareen’s son in his statement given to FIA on April 9. The agency further directed Tareen to mention if the “assets have been declared to FBR or not, acquired by or on behalf of the then CEOs JDW and JKFSL or their family members”.

“The details should include a complete description of assets, location, mode, and cost of acquisition along with money trail.”

The statement further said the suspects had failed to produce the documents despite “repeated summons and requests sent to JDW, JKFSL & FPML officers”. It added that the “CEO/CFO/ … [and company] secretary” had informed the FIA that the transactions were with the PTI leader and his son.

The statement warned that “non-compliance” of the “call up notice and continued failure to produce the relevant record” will lead the body to believe that the omission is deliberate.

The investigation “will [then] proceed on the basis of documentary evidence available on records,” it said.