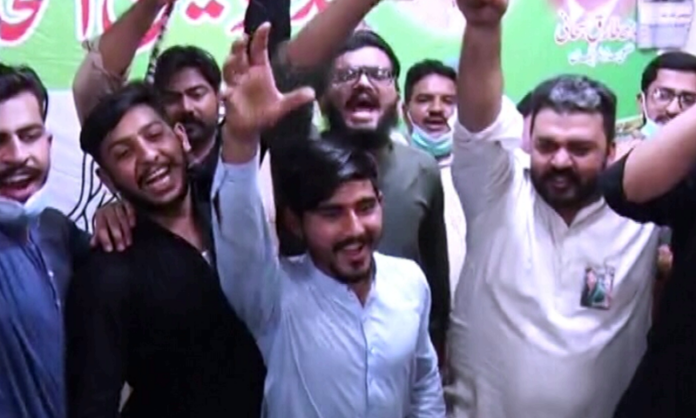 In a video message posted on his Twitter account on Sunday, Malhi said, “I thank the people of Daska who have participated and contested this election with me for so long. Congratulations to Nosheen Iftikhar who won.”

Malhi also congratulated the Election Commission of Pakistan (ECP) which conducted a clean and transparent election.

In the video message, he thanked his party, voters and supporters who stood with him in thick and thin and fought the huge battle against the mafia. “We will come back with a thumping majority,” he vowed and wooed his voters asking them not to worry as per the Prime Minister Imran Khan’s directives.

“I especially want to thank the ECP. You have conducted the elections in the peak of Covid-19 and with great efforts you managed this elections.”

Malhi said that “let all take a break and then come back to the much-needed work to bring a change”. He said that he is ready to sacrifice his life for the country.

Malhi vowed he would remain among his voters, supporters and party men irrespective of the election results.

To deal with any untoward situation, Rangers and police were deployed in the constituency with Pakistan Army soldiers on standby.

After the results came out, Federal Minister for Science and Technology Fawad Chaudhry on Sunday said that PTI has to improve its party’s system.

While responding to the results of NA-75 by-election, the minister took to social-networking website and posted that in Daska, PML-N didn’t win but PTI faced defeat.

“I have raised the reasons behind PTI’s rout in NA-75 with leadership,” he added.

Fawad said that there is no ideology of former prime minister Nawaz Sharif and PML-N.

Accepting Pakistan People’s Party (PPP) Chairman Bilawal Bhutto and PML-N Vice President Maryam Nawaz as leaders is a slap in the face of democracy, he went on to write.

Moreover, Minister for Interior Sheikh Rasheed on Sunday said that “democracy won” in the Daska by-election adding that it was a “defeat” for everyone who misjudged PM Imran’s vote bank in Daska, since the PTI candidate was defeated by a thin margin.

“We won even though we lost, in the Daska by-election,” said the minister. “We are proud that Imran Khan has a [sizable] vote bank in Daska till this day,” he added.

He said that the large amount of votes polled by Asjad Ali Malhi in the Daska by-election were proof of “Imran Khan’s narrative being alive”.

He lashed out at the opposition, saying it was the PTI’s “luck” that it had to deal with such an inept opposition, referring to the Pakistan Democratic Movement’s (PDM) internal conflicts.

Rasheed spoke about the Sindh government and the Muttahida Qaumi Movement–Pakistan (MQM-P), saying that the government will continue to involve the provincial government in all important matters.

Regarding Sindh Chief Minister Murad Ali Shah’s recent criticism of the federal government wherein the CM lamented that the Council of Common Interests (CCI) was not called frequently, Rasheed said that misunderstandings occur frequently but talks with Sindh government will continue.

He said: “Talk to us about electoral reforms and other stuff, we are willing to engage with you. However, unfortunately, due to various programmes on media, misunderstandings arise.”

The minister spoke about the MQM-P as well, saying that he harboured good relations with the party. He said that the prime minister will ultimately take the decision on whether or not the party’s sealed offices can be reopened or not.

“Shahzad Akbar is overseeing the cases on money laundering and against the sugar mafia,” he alleged, speaking on the so-called campaign against Shahzad Akbar.

“The Federal Investigation Agency [FIA] reports to me but I am letting Shehzad Akbar do whatever he is doing,” he added.

In a statement, the SACM said that it’s the part of politics whether you win or lose in the polls. The reservations on ECP are still intact, she added.