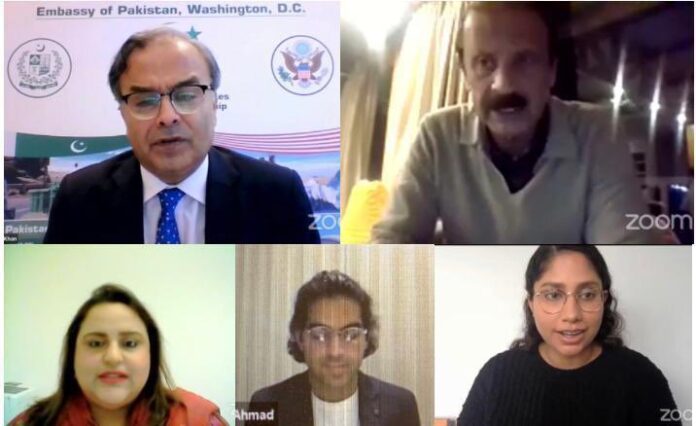 WASHINTON: Pakistan’s embassy in Washington organised on Friday a virtual tour of Lahore showcasing to its American audience the city’s rich history, culture, and cuisine in an effort to exhaust the country’s full tourism potential.

In his opening remarks, Ambassador to the US, Asad Majeed Khan said the event was the third episode in the mission’s web series introducing Pakistan’s top historical and cultural sites.

From history to cuisine, music to culture, thoroughly enjoyed taking a virtual tour of the streets of Lahore @PakinUSA webcast series on Tourism potential of Pakistan #PakurBags#DiscoverPakistan@WCLAuthority@hniqbal@heyfaizan pic.twitter.com/BWdmaXKoGs

He said the virtual trip highlighted the gardens, monuments, mosques, shrines, and culinary delights of Lahore. The city’s rich history and culture, the warmth and exemplary hospitality of its people, and its exquisite cuisine make it a must travel destination for all tourists, he added.

In his keynote address, Walled City of Lahore Authority (WCLA) Director General Kamran Lashari underscored the city’s significance as the cultural capital of Pakistan. He also touched on its glorious past and how it evolved over the period.

A documentary was also screened focusing on the important role played by WCLA in restoring the lost glory of the city’s neglected interior.

Haneen Iqbal, a freelance contributor whose write-up presenting Lahore as among 52 places to visit in 2021 was carried by The New York Times, spoke about her attachment to the place.

Iqbal was born in Lahore but never lived there. When she returned to her hometown years later as an adult, it became her favourite destination. She said that visiting Lahore and experiencing the beauty of its culture was a transformative experience for her and her friends.

Faizan Ahmad, the author of Lahore by Metro, made a presentation on the sights and sounds of Lahore based on his interactions with people from diverse backgrounds.

He said the most striking thing about the people of the city is “their warmth and willingness to welcome everyone with open arms”.

A diverse audience attended the event, which was also live-streamed on the official Facebook page of the embassy, a press release issued by the embassy said.

Facebook
Twitter
Linkedin
WhatsApp
Email
Previous articlePolling comes to end in high-stakes Daska by-election
Next articleExplainer: What is behind the latest unrest in Northern Ireland?