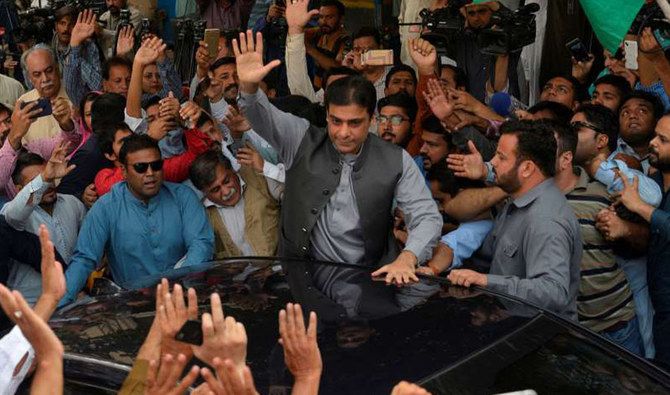 A two-judge bench of the high court had directed the prison authorities to release the politician after the submission of surety bonds. District and Sessions Judge Akmal Khan issued the release orders after verification of the surety bonds submitted by Hamza’s guarantors.

PML-N Vice President Maryam Nawaz arrived outside Kot Lakhpat prison to receive her cousin whereas PML-N workers had gathered outside the jail to celebrate the release. Carrying flower petals for Hamza’s welcome, they danced and chanted slogans in his favour and against the government.

The National Accountability Bureau (NAB) had arrested Hamza in June 2019 from the LHC premises after the high court rejected his request for an extension in pre-arrest bail in the Ramzan Sugar Mills and the money laundering cases.

The Ramzan Sugar Mills reference claims that Sharif, in his capacity as Punjab chief minister, used public funds for the construction of a bridge to facilitate his family-owned sugar mills.

On February 2, he had filed his second petition before the LHC for bail on merit in the case which involves charges of assets beyond means.

The bail had also been sought on an additional ground of hardship and inordinate delay in the trial proceedings as the Supreme Court (SC) in January denied relief to him with a direction to approach the LHC with fresh grounds for bail.

The petition, filed through advocates Azam Nazir Tarar and Amjad Pervaiz, adopted the stance that the reference was filed 14 months after his arrest in June 2019. Keeping an accused in jail for this long is equivalent to sentencing them before the trial, it had stated.

It further argued that the petitioner was entitled to bail on this ground of delay alone without touching the merits of the case.