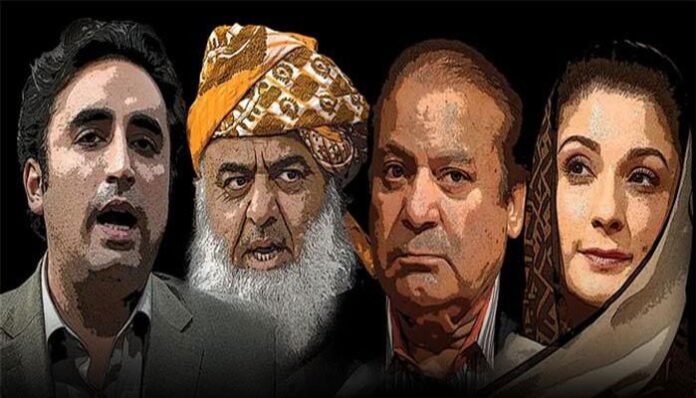 ISLAMABAD: With the Senate elections due in two week’s time, Pakistan Democratic Movement (PDM) has intensified its preparations for the big challenge on March 3, wherein top leaders of three major parties of the alliance – Pakistan Muslim League-Nawaz (PML-N), Pakistan People’s Party (PPP) and Jamiat Ulema-e-Islam-Fazl (JUI-F) – are huddled up in the federal capital.

On the side of the board, the ruling Pakistan Tehreek-e-Insaf (PTI) also has reached out to its allied parties and the sources in the government alliance say that almost all conflicts have been resolved, adding that the government coalition is ready to face the challenge from the PDM.

Sources in the PDM say that the first major challenge is the win of PDM joint candidate and former premier Syed Yousaf Raza Gillani, who is the candidate of the alliance for the general seat from the federal capital.

PPP Co-Chairperson Asif Ali Zardari, PML-N Vice President Maryam Nawaz and PDM President Fazl have decided to stay in the federal capital for the next two weeks and spearhead the campaign for Senate elections, as well as give the final touches to the upcoming long march scheduled for March 26.

Sources in the PML-N have told Pakistan Today that Maryam will stay in Islamabad from February 26 to March 3, during which she will monitor the Senate elections and consult with party leaders at all levels on preparations for the long march.

On this occasion, the PML-N, the largest opposition party, has convened a meeting of its Central General Council (CGC) on February 27 in the federal capital. Around a thousand members, including the PML-N members of the parliament (MPs), party officials and CGC members, would attend.

The party’s strategy on the long march and Senate elections will be discussed at the meeting and opinions and suggestions will be sought from the leadership at all levels. Responsibilities for making arrangements for long march and sit-in will be handed over to party officials and members of parliament, sources say.

The PML-N VP will also meet PDM leaders, including senior party leaders and Gilani, in the federal capital regarding Senate elections.

Prime Minister Imran Khan on Monday travelled to Peshawar and met with the party’s lawmakers to hash out a strategy to deal with the challenge coming from the PDM.

Soon after arrival, the PM met with Khyber Pakhtunkhwa (KP) Governor Shah Farman and KP Chief Minister Mahmood Khan. The two leaders briefed the prime minister on the issues and internal differences between the party lawmakers. The meeting discussed progress on ongoing development projects in KP besides political issues.

Later, while talking to KP cabinet and lawmakers, PM Imran said that the real purpose of politics is to serve the people at large. He added that, unfortunately, people here used politics only to make money.

“They used money everywhere and their condition is a warning sign. When morality is destroyed, the nation goes to ruin. We think of the future and the betterment of our generations.

God has blessed Pakistan with everything. We are left behind because power was taken here to steal money instead of public service. We want transparency in every system,” he said.

All the PTI members fully supported the prime minister’s vision.

Later, Prime Minister Imran chaired a high-level meeting in Peshawar and said that special attention should be paid to the development of tribal districts. The meeting was informed that Rs50 billion has been spent on development projects including health, education, infrastructure and other projects so far.

During the meeting, the coalition leadership consulted on the Senate elections and reviewed a number of proposals. Bazdar, Parvaiz and Moonis finalised the action plan for the Senate.