India has struggled with local bodies 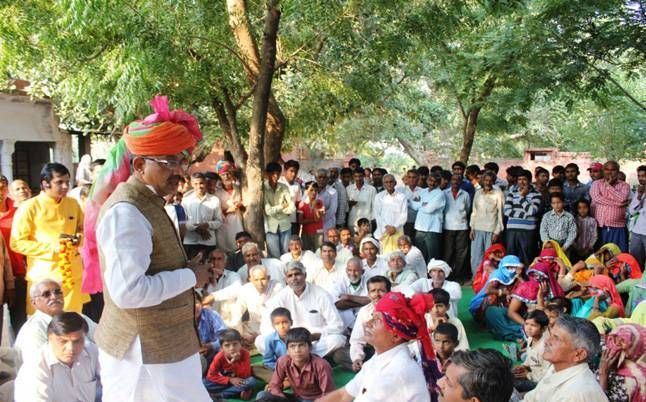 The framers of the Indian Constitution heavily cut short the Gandhian concept of Panchayats and rural development while providing for different arrangements. Despite the fact that they were not very satisfied with the working of these local bodies as institutions of popular government, they simply gave a directive in Article 40 of the Constitution, “The state shall take steps to organise village Panchayats and endow them with such powers and authority as may be necessary to enable them for function as units of self-government.”  Under the heading of Directive Principles of State Policy (articles 36 to 51) different guidelines of rural development were given to state government with no binding to implement the ideals. In initial years, in order to achieve rural development and strengthen Panchayati Raj Institutions the Community Development Programme was launched in the country on a large scale with the National Extension Service as an agency through which the social and economic transformation of village life was to be brought about.  It was implemented with assistance from the Technical Cooperation Programme Agreement between the Government of India and the USA which was signed in May 1952. The Programme was initiated with a great deal of enthusiasm and hope, being different in style and orientation of administration, the structure of new development administration and the element of people’s participation that was a part of the basic assumptions and objectives.  Earlier the district and the village levels of local bodies had existed for long, but blocks at the intermediate level was the new introduction in the administrative structure of development.

The above arrangements were made in the light of changed circumstances which were signalled in the post-World War II phase. The liberation of many Afro-Asian nations from the clutches of colonial rule was a catalytic phenomenon in this direction. These countries, which were poor and underdeveloped, adopted different strategies for development. Even development which earlier was mainly associated with economic growth now acquired broader meaning. Unlike in a technical sense in which development refers to qualitative and structural changes in the state of an economy, development, in the modern sense, refers to a relatively stable long-range increase in real national income that is accompanied by a change in the attitudes of the people, their motivation, institutional set-up, production techniques, and son on. From another angle it may also refer to the production and utilisation of material resources or to the development of human resources. Enrichment of human capital refers to the un-economic factors such as the social, political, ethnic or educational background of the people who participate in the development tasks. Thus, the goal of development clearly means the enrichment of the total quality of life and its availability to all sections of the community.  Development is not merely the provision of opportunities but also their actual utilisation by the people for whom they are intended and involves the creation of facilities necessary for such utilisation.

Like other Afro-Asian countries the large majority of the population lives in rural India which became the main thrust of the national development effort. Different countries adopted, with a view to develop rural areas, different approaches and strategies depending on the ideological orientations of the elite, the structure of political power and the perception of national needs.  In India about four-fifths of the population lived in the rural areas, and as Gandhi rightly says. “India lives in villages”. In this context India laid particular emphasis on people’s institutions because the programmes of development, it is generally agreed, are to be carried out not only by the state bureaucracy but also through effective public participation.

In the regime of Rajiv Gandhi it was considered necessary to further the organisation of these local units by inserting specific provisions in the Constitution itself on the basis of which the legislatures of the various States might enact detailed laws according to the guidelines provided by the constitutional provisions.

The actual working of the Community Development Programme and the National Extension Service did not deliver desired results, and the lack of peoples’ participation was considered as the greatest weakness of the system. The need to examine the whole issue in comprehensive detail with a view to evolving a system to enlist peoples participation and make the Panchayats more effective was felt, which resulted in the formation of a study team in 1956 under the chairmanship of Balwantray Mehta.

The report of the team contained a three-tier scheme of democratic decentralization and was endorsed by the National Development Council in 1958, which followed its implementation by several states in one form or another.

The Village Panchayat, Panchayat Samiti and Zila Parishad constituted the three tiers of Panchayati Raj, located at the village, the block and the district levels respectively. Since the scheme of decentralisation was conceived as a means to facilitate programmes of development, the middle tier of Panchayat Samiti at the block level was to be the basic institution in the entire scheme of Panchayati Raj. The establishment of a three-tier system of local self-government with full powers to assume responsibility for local development was the core of the Mehta Committee recommendation.

The new pattern and practice of Panchayati Raj witnessed a substantial transfer of power into local hands but this revolution was not accompanied by any social or economic revolution. The process of its decline was started after the mid-1960s and it continued for almost the next two decades. In fact the non-devolution of the sources of revenue proved to be the greatest stumbling block in the performance of Panchayati Raj bodies. The PR institutions were not regarded either as a political means to bring about change in rural India, as part of the overall political process in the country, or as institutions reflecting social divisions in society. Indian politics in the 1970s showed a shift towards centralisation of power on the one hand, and on the other hand, an effort on the part of the central leadership to reach out to the people directly.

The first non-Congress government of the Janata Party was formed in 1977 which appointed a high-powered committee under the chairmanship of Ashok Mehta to examine the whole issue and make suitable recommendations. Its report represented a landmark because it treated the PR as an extension of democracy, it declared the need of providing constitutional sanction of Panchayati Raj and suggested to transfer substantial quantum of powers from the State Government to the local bodies. The major thrust of the report was on decentralisation.

At a later stage, during the period of 1985-92, some serious thinking was done at the national level in favour of giving constitutional status to Panchayati Raj institutions. In the regime of Rajiv Gandhi it was considered necessary to further the organisation of these local units by inserting specific provisions in the Constitution itself on the basis of which the legislatures of the various States might enact detailed laws according to the guidelines provided by the constitutional provisions. Simultaneously the phase of Globalisation and Liberalisation came in the world and India as well, which made the Constitutional Amendment regarding Panchayati Raj institution an essential factor for the development of rural India.