End of the farce 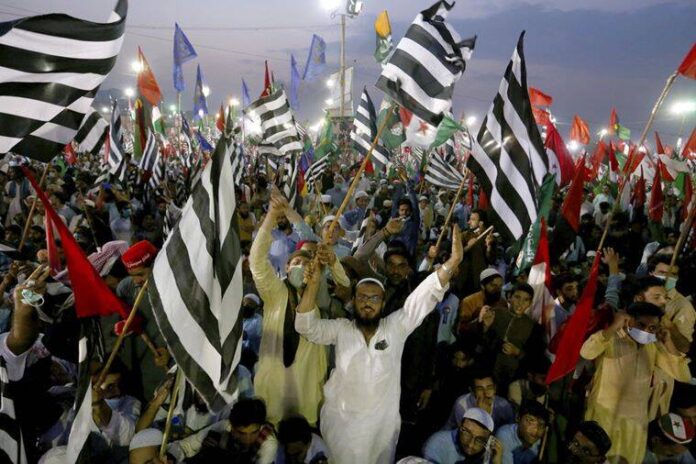 “The criminal is not alone when he returns to the scene of the crime. He is joined there by his victim, and both are driven by the same curiosity: to relive that moment which stamped past and future for each.”

It is common knowledge that one is able to do only as much as one is capable of. Dreaming beyond one’s capacity and capability can trigger disastrous consequences. An apt example of the phenomenon is the Pakistan Democratic Movement (PDM) and its Bucket List.

Not long ago, 11 parties with vastly conflicting objectives had got together with the express aim of escaping accountability of their grime by holding a series of rallies ending with leading a charge on Islamabad with hordes of captive supporters from the seminaries. In between, the idea of resigning en masse from the assemblies also titillated their imagination.

This country has been ravaged mercilessly and shamelessly. It can barely breathe to sustain itself. The wounds are deep which are no longer curable by injecting a tablet alone. It requires a major surgical procedure to put it back on the road to recovery. Proceeding further with accountability is only the initiation of that process. There would be miles to go till the state fully recovers from the maladies it was forced to embrace

In less than six months, instead of toppling the government, the PDM has effectively toppled itself. Even more than that, the disarray it is currently engulfed in is seamless. Every segment of the original stratagem, be it resignations from the assemblies or moving a no-confidence resolution against the government, has been divorced. Instead, this rabid conglomerate has now announced that they will think of resigning from the assemblies after participating in the Senate polls and by-elections to the assemblies. Becoming part of the forums PDM does not recognise as legitimate only to resign from them makes for unadulterated farce. Maybe this unnatural communion was destined to imploding within.

On the part of the constituent leaderships, this abject failure reflects serious miscalculations in terms of gauging the public mood and the people’s willingness to participate in agitation on the side of corruption. Times may have been difficult for them but, by all given accounts, a vast majority of people still repose unshakable confidence in the person of Prime Minister Khan and his sincerity in putting things right for the country. A number of initiatives which he has taken exclusively for the benefit of the impoverished communities make a case in point. Even at the height of the covid-19 crisis when the entire opposition was hollering that he should put the country under lockdown, he did not budge for the benefit of the poorest communities of the country whose survival, he was convinced, would be imperilled in such eventuality.

In spite of the recent setbacks, it appears the opposition parties remain intransigent in their inflexibility and would keep doing everything possible to upstage the government. That’s why, inside the assemblies, their attitude has been riotous. Use of foul language, shouting, indulging in physical brawls and charging the speaker’s dais not to let the House function has been their priority. Having realised that the chances of getting an NRO are all but extinct, this is possibly the only mechanism they could employ to impress their presence. One fails to understand what good such an attitude will do to their cause because they cannot pressurise the government through the use of crude tactics. In fact, they are guilty of defeating the very purpose for which they had avowedly plunged into the politics of agitation. This has been a customary approach of the opposition from the day the Prime Minister first came to the House to address it. They did not let him speak. This is a damaging precedent which is being set in the parliamentary domain which will affect every party that comes to rule. This also does not fit in well with their claim that they are engaged in bringing genuine democracy to the country. In fact, what they are doing will only create doubts in the minds of the people about its efficacy.

In reality, this has been the actual agenda of the opposition parties. With the spectre of accountability looming, they have resorted to employing tactics not to let Parliament function. They thought that they would be able to exert pressure this way to force the government to accede to their demand for a reprieve. This has not happened so far and, no matter what tactics the opposition may opt for, this will not happen in the future as well. I fail to understand why are they not able to fathom that Prime Minister Khan does not belong to their tribe of corruption and crime. Those who know him well also know that even if he were left alone, he would not create an exception in his pursuit to hold the guilty accountable. This process will not stall. Instead, it is likely to pick up steam in the future.

So, while the opposition misread the people’s mood, they also failed miserably to grasp the Prime Minister’s mind and his indomitable resolve to cleanse the country of perpetration of corruption. The sooner the opposition leaders are able to digest this reality, the better it would be for them and their battalions of cronies who are all lined up to have their gruesome sins forgiven. This is not happening. And it should not because it does not concern the fate of a few individuals alone. It is about securing the state and its future.

As Albert Einstein said, “The person who follows the crowd will usually go no further than the crowd. The person who walks alone is likely to find himself in places no one has ever been before.” This is the Prime Minister’s comfort zone. He came with a pledge to bring about a change– a resolve he remains steadfastly committed to. In spite of numerous difficulties which came his way, he remains focussed on his goal.

But, may be, writing epitaphs of the PDM is not as important as evaluating how things are likely to proceed from here onwards. With their bandwagon having lost steam, the road is clear for the government to move on. With or without the proposed voting through open balloting, the PTI is well placed to become the single largest party in the Senate. With the support of allied parties, it will also likely command a majority in the House. Thus, the path to legislation will be facilitated so that the government can bring changes to improve performance in conformity with its manifesto─ something which has been long overdue. This will, inevitably, throw up new challenges for the opposition leaders who have been used to going by what they had tailored exclusively to suit their spree of loot and plunder. The chances are that a lot will change in the future to the detriment of the opposition’s traditional interests.

That is what people with a lifetime of trust reposed in the person of Prime Minister Khan are actually thrilled about. This country has been ravaged mercilessly and shamelessly. It can barely breathe to sustain itself. The wounds are deep which are no longer curable by injecting a tablet alone. It requires a major surgical procedure to put it back on the road to recovery. Proceeding further with accountability is only the initiation of that process. There would be miles to go till the state fully recovers from the maladies it was forced to embrace.

This is not just everyone’s job. This requires real grit and courage which the person of Prime Minister Khan has in abundance. Only he can weather the venomous opposition and remain steadfast in his resolve to change the face of Pakistan.