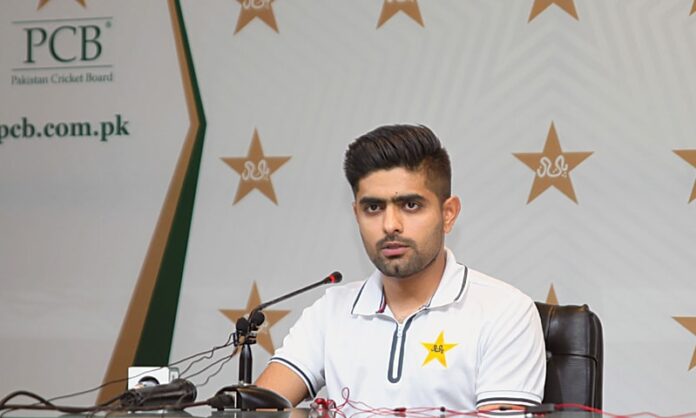 Pakistan’s captain Babar Azam said on Saturday that he expects his side to play “fearless” and “aggressive” cricket ahead of the two-match Test series against South Africa.

Speaking to Ramiz Raja via the Pakistan Cricket Board’s (PCB) digital platform, the 26-year-old batsman said that he wants players to give 100pc on the ground without fear of any consequences.

“I want the team to play positive but aggressive and fearless cricket, especially in white-ball cricket if we want to challenge top teams,” he said.

“Usually we stop scoring runs if we lose one or two quick wickets and this is where I want the team’s mindset to change — even if you’ve lost two quick wickets, you must continue to add numbers to the scoreboard,” the skipper added.

Babar said that Micky Arthur had always backed him and that support from the former coach helped him gain confidence.

“I was struggling, especially with red-ball cricket but Mickey supported me and kept backing me, which gave me confidence. It also made me realise how important it is for a player to be backed by team management when he’s struggling,” the Pakistan captain said.

“I am going to apply the same. I will support my players,” he said.

Babar said that being a captain, he always tries to take responsibility instead of escaping blame and always aims to lead from the front.

The top batsman, however, added that when he’s in middle order with the bat, he tries to focus on the game just as a batsman and doesn’t think much about the captain’s role.

He also made it clear to his cricket friends that they shouldn’t expect any out-of-the-way support from him.

“When you’re in the ground, you’re there for Pakistan and Pakistan should come first, [we are not] friends there. All your relations with individuals should be kept out of the ground,” he said.

Azam said that to be a top-quality side, it is important for Pakistan to be aggressive and beat top teams on their home soil.

“We need to be good enough against top-quality sides if we want ourselves to be considered as a topside and for that, we need to win series against top teams,” the Pakistan captain said.

Meanwhile, Pakistani spinner Yasir Shah is all set to prove he is “still good enough” during the upcoming two-match Test series against South Africa.

Speaking during an online press conference after the Pakistan team’s training session on Saturday, the 34-year-old bowler defended himself despite a decline in his bowling graph and said that lately, he wasn’t getting spin-friendly conditions to bowl on.

“I am fit and playing. I know that I am 34 but I am doing well for the team. I will try to prove my worth in this series and try to prove here that I still have cricket left in me,” he said.

“A bowler’s performance is always linked with the conditions available to him. If spinners aren’t getting any support from the wicket then their role turns into the role of supporting bowlers and fast bowlers lead the attack. I know I’ve not been able to take wickets like I used to do in past, but that doesn’t mean that I bowl that bad,” Yasir said about his recent performances.