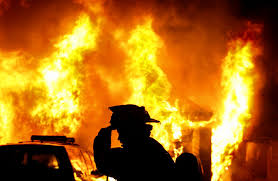 FAISALABAD: A man was burnt alive while another sustained injuries in two separate incidents here on Saturday.

According to Rescue-1122, 32-year-old Aslam was present in the house when a fire broke out due to a malfunctioning gas heater and engulfed the entire house in Dijkot area. As a result, he received severe burn injuries and died on the spot.

In another incident, a fire erupted in a house in Nighabanpura due to gas leakage. As a result, Khubaib received burn injuries and was shifted to Allied Hospital for treatment.

ISLAMABAD: In view of the alarming surge in coronavirus cases in the past week, the National Command and Operation Centre (NCOC) on Monday decided...
Read more
LAHORE

LAHORE: A district and sessions judge, Zafar Iqbal Naeem, and a teacher, Fehmida Bano, passed away of coronavirus on Monday. Naeem, who was posted at...
Read more
LAHORE

LAHORE: Lahore High Court (LHC) on Monday granted bail to a young man convicted in 2018 while still a teenager of insulting Islam by...
Read more
- Advertisment -