FM reiterates Islamabad's desire for peace and stability in the region 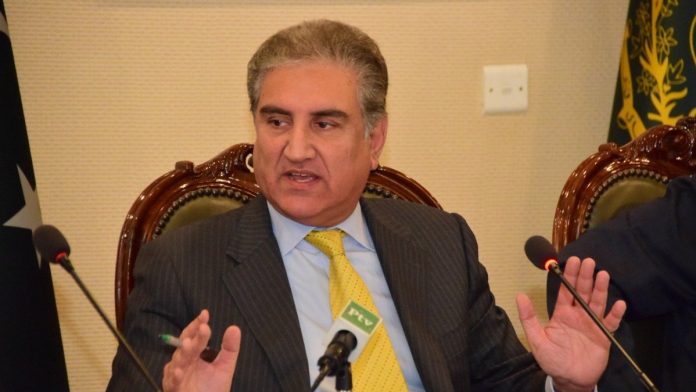 ISLAMABAD: Foreign Minister Shah Mahmood Qureshi on Tuesday warned the international community against the damaging role of “spoilers” within and outside Afghanistan trying to derail the ongoing peace process, Radio Pakistan reported.

In a statement, the foreign minister reiterated Islamabad’s desire for peace and stability in the region, including in the war-torn neighbouring country.

“We [the government] want the intra-Afghan dialogue to be successful and reach its logical conclusion. [But] there are some elements inside and outside Afghanistan playing the role of spoilers,” he said.

“If the spoilers succeed [in derailing the dialogue]”, he said, “besides peace and stability, the progress and prosperity of the Afghans could also be undermined”.

Qureshi, however, did not name any country or group which could sabotage the Islamabad-brokered intra-Afghan dialogue that is underway in Doha, Qatar between Kabul and the Taliban to end the 20-year-long conflict in Afghanistan.

Pakistan is Afghanistan’s top trading partner and is seen as a key regional player in helping facilitate a February troop withdrawal deal between the United States and the Taliban to begin the process of ending the war.

Pakistan’s role in the peace negotiations is a delicate one, with Islamabad seeking to avoid demonstrating the kind of broad influence over the Taliban that Washington has long accused it of having. The Taliban also do not want to appear beholden to Islamabad, experts believe.

Reportedly, the Taliban have said that Pakistan’s role in bringing the militant group to the negotiating table was instrumental. In one instance, Islamabad sent a message to the militants through religious leaders that they had to talk to Washington or risk a cut-off in ties.

Referring to the 2019 Pulwama attack, Qureshi said that there was an irresponsible government [in power] in New Delhi that could do anything for petty political gains.

He said that Pakistan has continuously been exposing India’s “real face” to the world.

“In the November 14 dossier, we presented to the world irrefutable evidence of India’s support for terrorists,” Qureshi said, recalling that an investigation by the EU DisinfoLab has confirmed Pakistan’s concerns about India’s false propaganda campaign to discredit Islamabad globally.

He further said that the international community has a responsibility to hold India accountable for the lack of peace in the region.

“The world has come to know that India, which they considered a secular state, is ruled by a fascist, Hindutva government,” he added.

The foreign minister underscored that the federal government has repeatedly clarified its stance on the Israel-Palestine dispute. “Banners denouncing Israel are being put up in Karachi for political purposes,” he said.

“When the government has clarified its policy on Palestine issue, then there is no question of recognising Israel,” he stated.

He said that the Pakistan Democratic Movement (PDM), a multiparty opposition alliance, wanted to hide the growing chaos within its ranks and save its declining reputation, whereas, the Pakistan Peoples Party (PPP) was “playing on both sides of the wicket and using PDM to achieve its own goals”.

He further said that the PDM’s stance was consistent with that of the country’s enemies.

Facebook
Twitter
Linkedin
WhatsApp
Email
Previous articleFormer BISP chief, others to be indicted in NAB case
Next articleStudents in Punjab won’t be promoted without exams this year