The country’s future is going to be interesting 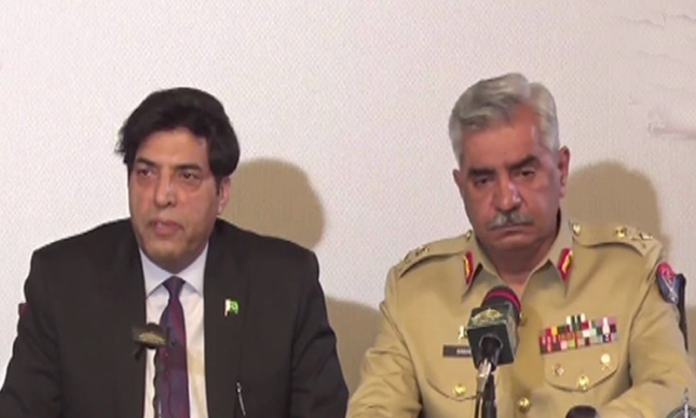 Both generals tried to exonerate the name of the Army from playing any role in the homicide of the late journalist, who lost his life in Kenya. Similarly, both generals tried to explain how Khan’s narrative regarding the cypher was a farce. Further, they claimed a media channel, ARY News, was involved in targeting the Army.

It was apparent that the coercion of time brought both the generals to holding the talk. Both generals tried to reposition the Army in the equation of credibility primarily for the locals but also for the international citizens. Both generals were open to all kinds of punitive media questions to achieve the objectives of the talk.

In a way, the press conference was an act of admission of the interference of the Army in politics – the act which is proscribed constitutionally. Both generals expressed the resolve of the Army– the high command– not to indulge in politics again. Unfortunately, both generals remained reticent about what brought the situation to such a pass: what made the hybrid regime experiment fail?

With the wrapping up of the experiment, particular politicians are the first layer to abandon, specific journalists and analysts are the second one, and the followers of such politicians and media personalities are the third layer to forsake. All the three layers are piqued at the Army. In totality, the Army’s withdrawal has caused a major commotion socio-politically, to evade which the Army decided to send its generals to the public.

There are, however, two sufficient reasons for optimism. First, Pakistan has to rely on geo-economic strategies to lift its economy and service the foreign debt. Pakistan needs investment in its infrastructure to enhance trade and business. Not the Army but the civilians can do this. Even the hybrid regime experiment was martial law in retreat. Second, the youth, most of whom feel they have been spent in the cause of the hybrid regime experiment, is bound to react against the Army. The spent generation may not endure the feeling of relinquishment.

There is a fourth layer: the higher judiciary, which must have felt expended. The judiciary remained instrumental in going out of its way to help the Army make the experiment of the hybrid regime successful. The willingness of the higher judiciary to kowtow to its uniformed master attracted a blotch on its reputation as an independent adjudicator. Expecting co-evolution with the Army, the higher judiciary strategised the link-minded bench, straightening out any bent. Post-press conference, the higher judiciary stands in the middle of nowhere. In disbelief, it is readying for eating its words– the past decisions– to weather the onslaught of shifting realities.

The press talk was also an open message of abandonment to the section of the media which was relying on the backing of the Army to roil politics in Khan’s favour. The section got disillusioned and its members are fleeing the country to ward off any instant reprisals. For their social survival, members of this section have taken the moral high ground: they have served the larger interests of Pakistan. This was despite the fact that they earned a lot of money in the process of political manoeuvring. Interestingly, this was the same moral high ground that the Army used to launch the hybrid regime experiment to steer the country to promised salvation.

Certainly, the hybrid regime experiment was a giant one to start and carried a tremendous cost to desert. Tyranny is that those who have been abandoned are groping in the dark to figure out what made the project botched, despite the fact that they were putting their best foot forward.

The discussion invites the next best question: will the Army stay apolitical at least in the coming decade? The probable answer is in the negative. There are two cogent reasons for pessimism.

First, Pakistan’s obsession with its geo-strategic position will keep the Army involved in national decision making. It also means that the Army would carry a veto power to disagree with a choice. Mere disagreement is not a big problem; the problem is when the Army sorts out alternative solutions– such as the hybrid regime experiment– to force its decision on the civilians.

Second, the slate of politics cannot stay cleansed of corruption. Political incompetence would stand in attendance. Acts of corruption are an incitement to the Army to jump into the political fray. The semblance of the moral high ground is always available to meddle in political affairs and correct the course.

There are, however, two sufficient reasons for optimism. First, Pakistan has to rely on geo-economic strategies to lift its economy and service the foreign debt. Pakistan needs investment in its infrastructure to enhance trade and business. Not the Army but the civilians can do this. Even the hybrid regime experiment was martial law in retreat. Second, the youth, most of whom feel they have been spent in the cause of the hybrid regime experiment, is bound to react against the Army. The spent generation may not endure the feeling of relinquishment.

This generation is of two types. One, which is mostly educated in private colleges and universities, and not in government-run institutes, uses its independent mind, no matter how callow the minds might be. Members of this generation are neither impressed by, nor fearful of, the Kakul graduates. This generation determines the worth by one’s intellect and not by one’s uniform. The same factor makes it a generation disrespectful of the authoritative norms.

This generation might be moved by emotive nationalistic songs but it is unaware of the existence of the country’s ideological boundaries which are under the custody of the Army. This generation is aware that, in its experiment, the Army used it as a soft proxy. This generation is more inclined to migrate to foreign lands than remain attached to the country. This generation is bound to offer the most resistance to the hegemony of the Army, besides taking revenge for abandonment. The second type of spent generation survives in Madrassas. Once it was a hard proxy; however, the changing regional scenario, besides immense counter-terrorism international pressure, has rendered it redundant. That is its grievance.

In short, it would be interesting to watch how the apolitical position of the Army goes with the future of Pakistan.