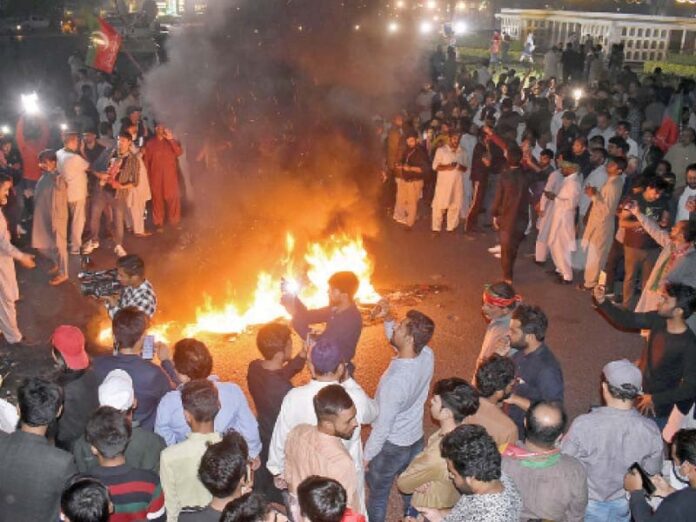 The year 2022 has been the year of surprises for Pakistan. After a sustained six months agitation against the established order, sometimes through the ballot and sometimes on the streets, a failed assassination attempt on the popular leader of the PTI seems set in motion the results, which many distractors of the popular leader thought, was the real goal of “regime change”, like the renowned hardware giant HP’s slogan, the “change reinvented”.

As things stand, the events on the GT Road have given a fillip to the pace of events intended by people behind the scene. Invariably this is the cruel truth of fifth generation warfare, where the person being used, does not realize he or she is being used; be it an activist, a hired sniper or a journalist!

Societies all over the world have set paths to change. Protests, streets protest, arson and agitation usually give way to the complete change. Apparently, Pakistan seems to be following the same path; however the former allies of the established order, now their most ferocious opponents, have followed up in the most weird manner; a manner which again suggests that what is being played out is not anything spontaneous or popular, rather it can be safely termed as a unique case of a fifth-generation agitation which can deliver results; in the case of Pakistan; the return of the PTI to complete what it has been calling the revolution which Pakistan direly needs.

It may be added that the PTI recipe of change might have many stakeholders other than the people of Pakistan. The world has witnessed these trends in the form of color-based revolutions; like purple, orange or green as well as those associated with a particular date like this date of March or that date of Khordad (Persian calendar).

No doubt that Pakistan is at the make-or-break point. It can disintegrate into many units; face civil war and even occupation; however, that position does not explain the fact that anyone crying revolution may be taken on board by the change-hungry masses and placed on the proverbial throne of Islamabad. The fifth-generation agitation has already taken its toll in many ways; the implications of the same have been discussed in detail in the previous columns on this page; like the ever-increasing polarization of the masses; coupled with complete lack of tolerance for the opposing views.

If the western democracies pride themselves for infusing the workability of the democratic culture with economy and polity, Pakistan looks like a laboratory for democracy gone berserk. Stooping to the lowest rung of argument is commonplace here. Resorting to abuse is a normal activity in pages emanating from Pakistan when viewed in social media sites like Facebook or Twitter.

However, along the G T Road near Wazirabad, Pakistan, no one has been sure about the predicted pace of the revolution march; what next! What is happening almost every day until Thursday was that the elite political leadership scales the container for a Matinee entertainment show, followed by firebrand speeches and finally moving back to the hearth.  Even that possibility is open to question, given the assassination attempt on Khan.

The much-awaited revolution might never come that way, but one thing is crystal clear for the Pakistani masses; it is going to be another coup look-alike political arrangement on the back of their sweat and suffering. Not much is going to change alas!

However, the scenes after the attempt on Khan on Thursday illustrated the point once again of the wide gulf between the leadership from the elite and the common man on the street. Tabdeeli or revolution might have changed the things in name, but that has failed to bridge the gap between the elite and the poor, the haves and have–nots, in a practical sense. As people are in a frenzy over the attempt on life of their leader, the leadership now in the name of security is still more inclined to maintain a distance.

For the Pakistani political elite, including the leader of Azadi march, people are human cannon fodder, the number of heads, which need to be shown in a proverbial manner to claim victory. Going one point further, the situation points to the fact that the elite political leadership is not interested in a mass following and a real change of sort; rather they just want a show of heads or swords to claim victory for themselves.

In the parallel history along with the genuine political movements, such show of crowd has been a convenient cannon fodder for the coup makers too. The 1953 coup, which overthrew Mossadegh and restored the Shah, was the first instance of what a fifth-generation revolution or coup looks like.

That overthrow had the crowd, womenfolk, clerics, street strong arms and all types of human fodder, which might have been needed to make the case of the Shah stronger. Imran Khan’s unceremonious departure from Parliament was not the result of a street agitation, rather an instance of mature constitutional procedure.  That departure in no way resembled the Mossadeq exit. Rather the restoration of the Shah looks strikingly like that of the much-awaited restoration of Imran Khan as the expected chief executive of Pakistan.

So, should we conclude that the tiring route of six months’ agitation was designed by someone from within the corridors of power to bring back Khan with a resounding landslide, enough to transform Pakistan as the local powers or the distant powers want the country to be.

The shot in Wazirabad has at least confirmed a landslide in any fair or engineered elections. Rather a failed assassination fits in into the intended pattern of building up sympathy for a political trend, which might not have grossed much in fair weather.

Is it to be expected in the next few days, week or even a month that there will be nothing but coup attempts painted and marketed as revolution? That revolutionary brigade like the conventional army has all one can imagine, drummers (read anchors), corner meeting orators (read senior journalists) and foot soldiers (sweating masses).

Such apprehensions gain currency on the count that factionalism seems to have taken root in every institutional structure. Unusual pressers are nothing but a code call-out for the renegade elements to behave. What is happening is the fight between the groups, yet supporters call the strife revolution and distractors call it “Sedition (Fitna)”.

The much-awaited revolution might never come that way, but one thing is crystal clear for the Pakistani masses; it is going to be another coup look-alike political arrangement on the back of their sweat and suffering. Not much is going to change alas!