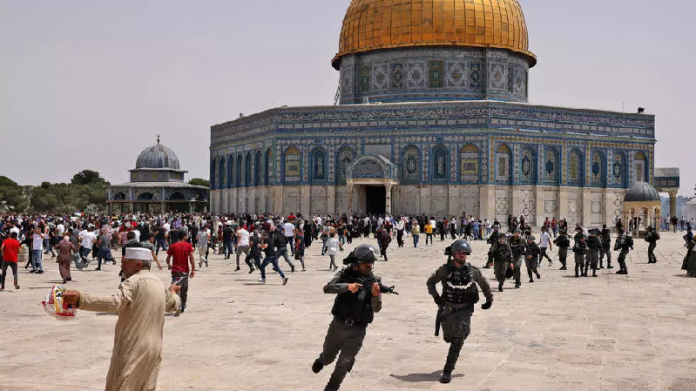 JERUSALEM: Tensions are running high in occupied East Jerusalem as Jewish settlers continued their incursions into the Al-Aqsa Mosque complex on Monday.

Settlers protected by Israeli security forces stormed the compound as they mark the Jewish holiday of Rosh Hashanah, which began on Sunday.

There was heavy police presence at the compound, with officers even scaling the Qibli Mosque, one of the main prayer halls in the complex.

Over the past week, several Jewish extremist groups urged settlers to storm Al-Aqsa during the Rosh Hashanah holiday. Palestinian groups have called on Palestinians to maintain a presence at the complex over the coming days.

At least two Palestinians needed medical attention after attacks by Israeli forces, according to the Palestinian Red Crescent Society.

Al-Aqsa Mosque is the world’s third-holiest site for Muslims. Jews call the area the Temple Mount, saying it was the site of two Jewish temples in ancient times.

Israel occupied East Jerusalem, where Al-Aqsa is located, during the 1967 Arab-Israeli war. It annexed the entire city in 1980, a move never recognized by the international community.