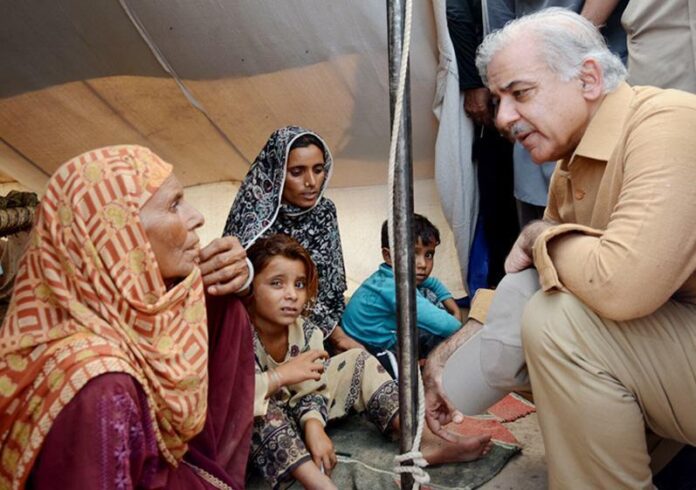 Pakistan is going through an ecological disaster and its over 2.5 million acres of agricultural land is still under the worst flooding. International experts believe that the latest floods in Pakistan are unprecedented in the history of South Asia.

According to estimation, a total of 13, 093kKm of roads and 396 Bridges have been damaged, over one million livestock washed away with flood water and over 1.9 million dwelling units (houses) have succumbed to floods.

However, this huge disaster has failed to change the political scene of Pakistan. PTI Chairman Imran Khan is still holding public meetings in areas that are not inundated and demanding new elections before November 2022. The reason behind his deadline is the appointment of a new Army Chief and Imran has said that the sitting government must go home, elections must be held and a newly elected government would appoint a new Army Chief.

Democratically, Imran Khan has every right to continue his campaign against the sitting government when the world is talking about the flood disaster in Pakistan.he United Nations Secretary General in his opening remarks at the UNGA talked about floods in Pakistan and demanded the world’s help for relief and rehabilitation of over 33 million affectees of the flood.  World famous philanthropist Angelina Jolie arrived in Pakistan as a part of her campaign to flash Pakistan as a “country in need”. She believes the recent flood devastation was not matched by the 2010 floods she witnessed. Pakistani television channels provide half of their airtime to show Imran Khan and half of the time is contributed to other programming and flood news.

The most aired news of Imran Khan is directly or indirectly linked with the Contempt of Court cases Imran Khan is facing.  Under the advice of the court, Imran Khan had been submitting regretful statements for what he commented against the Additional Session Judge of Islamabad. His last statement of regret still has “If I did something wrong”. Imran has been granted more time to review his “if”.

There is a debate going on in Islamabad about court reliefs Imran Khan had been receiving but I must avoid sharing details of this debate here because this debate can lead anybody easily to a sluggish land where “Contempt of Court” can end the career of anybody. I know my name is not Imran Khan and my star is not as strong as Khan Sahib so I must avoid this discussion.

In Pakistan, everything can be supreme but of course, not Democracy or People, and this is the lesson politicians must learn. Politicians in Pakistan must read the poetry of Habib Jalab, Ahmad Faraz, and Faiz Ahmad Faiz once a week to remember who is taqat ka sarchashma in Pakistan and who is Supreme in the system. Today’s Supreme is Imran Khan and one must not deny this reality.

According to Hindu Mythology, everybody is born with his or her unique Janam Kundli (birth chart) and if Yousaf Raza Gillani, TallalCh, Daniyal Aziz, and Nihal Hashmi want to compare themselves with Imran Khan then they must be born again after consultation with talented crystal gazers so they can fix their Saadh (good for future) birth time to live with a fortune Imran Khan is enjoying.

According to Hindu mythology, a Kundali or horoscope is a predictive diagram that is made in view of the correct birth date, place of birth, and time. This diagram decides the situation of different planets, signs, the Sun and the Moon, visionary angles, and only a talented crystal gazer can draft and read a Kundali.  A Kundali is partitioned into 12 houses with different planets and signs. The principal house begins with the dominant and the rest of the houses are numbered in a clockwise heading. These houses have a clear position for a man. The signs and planets travel from one house to another for particular periods, this way helping in anticipating the different parts of a person. Jyotishis (fortune tellers) are of the view that the rising star of Imran Khan will go through a crucial phase in the next two months (October-November) and it can gather the strongest powers that are usually not possible for a human to enjoy if it gets support from another star it had been close to in the past.

The PML(N) always says that Imran Khan is ladla (blessed and pampered) of someone because he is beyond the law of the land and he has never been arrested, jailed, or disqualified. If these are criteria of being a ladla of invisible powers, then PML(N) could also find such ladlas in its cadres and ranks who have never been arrested, jailed, or disqualified even while being in former and sitting kitchen cabinets. The PML(N) also has a list of the “fortunate” having strong stars like Imran Khan who had been “untouched” during the worst kind of political victimization that started around 2014 against the PML(N).

Once upon a time, the PML(N) was a fortunate party like the PTI is today. However, one sentence of its leader Mian Nawaz Sharif changed the fate of this party. Once Mian Nawaz Sharif said “I will not take dictation” and since then the party has been in turbulence. The unlucky supreme leader cannot appear on the television screens and people like Pervaiz Rasheed, who dedicated their lives to PML(N), cannot qualify for a senatorship.  I think there is no need to explain the core reason for being “unfortunate”. Pakistani political history tells us stories of elected governments being thrown out of power since the country got independence. Whosoever wishes to survive in Pakistan must read the Iliad of Homer. One of the lines of the 10th book says “Tactics, my noble Menelaus. That’s what we need now”.

Tactics for survival include avoiding famous slogans like “Awam takat ka sarchashma hain\” (people are the source of power), “Vote ko izzat do” (Respect the vote), “Jamhooriat Taraqqi ka Wahid Rasta Hai” (Democracy is the only path to progress) or any other slogan that claims “Democracy” and “People” are supreme.

In Pakistan, everything can be supreme but of course, not Democracy or People, and this is the lesson politicians must learn. Politicians in Pakistan must read the poetry of Habib Jalab, Ahmad Faraz, and Faiz Ahmad Faiz once a week to remember who is taqat ka sarchashma in Pakistan and who is Supreme in the system. Today’s Supreme is Imran Khan and one must not deny this reality.