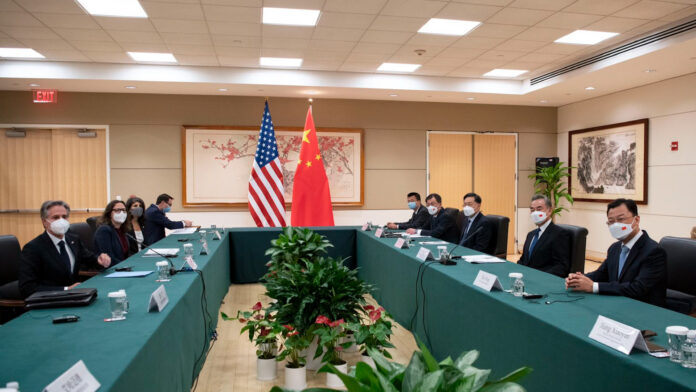 NEW YORK: Chinese State Councilor and Foreign Minister Wang Yi met with U.S. Secretary of State Antony Blinken at the Permanent Mission of the People’s Republic of China to the UN in New York.

Wang Yi said that the current China-U.S. relations are facing the gravest challenge. There are lessons that the U.S. needs to learn from it.

China-U.S. relations are at a critical juncture, and it is urgent for both sides to establish a right way for the two major countries to get along with each other in a responsible attitude towards the world, history, and the peoples from two countries, to promote the stability of the relationship between the two countries.

Wang Yi comprehensively expounded China’s solemn position focusing on the recent wrongful actions of the U.S. on the Taiwan question.

Wang Yi emphasize that the Taiwan question is the core of China’s core interests. The United States has made a solemn commitment to China on the Taiwan question. There are three China-U.S. joint communiques, and the current U.S. government has repeatedly expressed that it does not support “Taiwan independence”.

However, the actions of the U.S. run counter to this. They attempt to undermine China’s sovereignty and territorial integrity, engage in the so-called “contain China with Taiwan”, sending a very wrong and dangerous signal.

The U.S. should return to the three China-U.S. joint communiques and the one-China principle, and make it clear that it opposes all kinds of “Taiwan independence” separatist activities.

Wang Yi also emphasize that Taiwan question is China’s internal affair, and the U.S. has no right to interfere. China’s position on resolving the Taiwan question is consistent and clear, and will continue to adhere to the basic policy of “peaceful reunification and one country, two systems”. China will take strong measures to respond to all “Taiwan independence” attempts aimed at splitting China in order to firmly defend national sovereignty and territorial integrity.

Wang Yi stressed that China and the U.S. have both common interests and profound differences, which will not change. From the first day of contact, the two sides knew that they were dealing with countries with different systems. This did not prevent the two sides from cooperating based on common interests, nor should it be a reason for the confrontation between China and the U.S.

It is hoped that the U.S. will correct its perception of China, change its China policy with containment and suppression, and stop trying to deal with the Chinese with its position of strength, stop thinking about hindering China’s development, and stop unilaterally bullying. It is necessary to create a favorable atmosphere for the resumption of normal exchanges between the two sides, and to push China-U.S. relations back to a healthy and stable development track.

Blinken said that U.S.-China relations are currently in a difficult period, and it is in the interests of both sides to bring bilateral relations back to a stable track. The two countries have successfully managed differences in the past, and the U.S. is willing to have candid communication and dialogue with China to avoid misunderstandings and misjudgments and find a way forward.

The two sides also exchanged views on the situation in Ukraine. Both sides believed that the meeting was candid, constructive and important, and agreed to continue to maintain communication.