The PML(N) is not focusing on Imran Khan’s morality 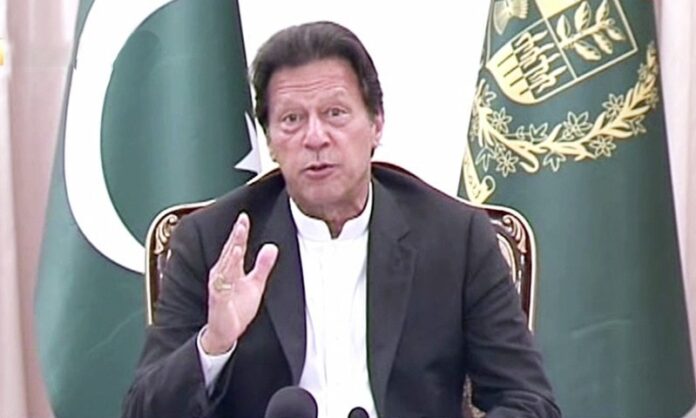 Chairman Pakistan Tehreek-i-Insaf (PTI) and former Prime Minister Imran Khan in his Twitter message on August 20 stated that all the pictures and videos show clearly Gill (Shabaz Gill) was tortured both mentally and physically including sexual abuse.

Imran Khan was referring to the arrest and police custody of his Chief of Staff, Shabaz Gill, who is facing a case of abusing state institutions and trying to divide the rank and file of the Pakistan Army. Imran’s Twitter message was very interesting for everyone, including me, because this could be the rare case I have seen of sexual abuse where no photo of private parts was available and only his facial photos were shared, claiming that his face is telling he was sexually abused.

One can say this is a shallow statement of Imran Khan but I believe this is the perfect media management the bPTI successfully runs and is an expert of. Party chairman Imran Khan leads the campaign and pitches information with full force and then his media team strongly spreads it to every corner of the world. I believe the multiparty alliance is yet to gauge the depth of PTI media tricks.

On the other hand, the whole PML(N) campaign over three important cases: Tosha Khana, Al-Qadir University, and Foreign Funding, lacks unity, cohesion, consistency, uniformity, and interconnection; and these five components are the foundation of any successful media campaign and communication management. The PML(N) is focused on the “volume of money Imran Khan allegedly got” instead of playing on “morality and illegality” Imran Khan plays on “morality discourse” and tags his all opponents chor (thieves), traitors, etc.

Imran Khan always questions all important state institutions on “morality ground” instead of the legal ground because most state institutions are on the right path legally and Khan cannot build a legal case against them but can easily question their acts on moral grounds.  For example, the Army should be neutral legally under constitutional oath but Imran questions it on the moral ground that it must support him because he is on the right path.

On the other hand, the PML(N), instead of generating opinion over the morality of Imran Khan has become a victim of “facts” and the PTI has successfully diverted all cases to “moral obligation”. There is no doubt the PML(N) government got good enough chances to establish moral cases against Imran Khan but its loose, stretched, and illogically far-spread media management is seen as having no homework behind it. The PML(N) did not release any factsheet about the PTI to the media in the foreign funding case, like how many times PTI sought adjournments of the case (54 times PTI asked the Election Commission to adjourn the case) in eight years. The media was not given the names of the lawyers the PTI had been changing, therefore no interviews of former lawyers of PTI were recorded/promoted asking them why did PTI change them? There were no series of talk shows arranged by the PML(N) before and after the announcement of the foreign funding case verdict and the issue was taken just as a “one-day event” and a lot of content appeared on television screens and newspapers but without any unity, cohesion, consistency, uniformity, and interconnection.

Instead of generating the opinion that taking any amount from foreigners, even $100, is illegal and immoral, the PML(N) kept talking about the amount of money in the foreign funding case and PTI easily justified the issue stating that PTI got just $100 or $200 from overseas Pakistanis.

No documentary/long reports or memes were produced by the PML(N) for providing to social media and electronic media before or after the verdict, though the PML(N) could have produced such material covering eight years of this case in court, and 13 illegal accounts had come to the surface before the Election Commission much before the announcement of the verdict.

Moreover, media management of a party must not be the responsibility of everybody but the head of the government must take this responsibility by adding other experts from other political parties of the multiparty government. I believe it should be Prime Minister Mian Shahbaz Sharif or party supreme leader Mian Nawaz Sharif who must head the media team of the government because they are going to pay the cost.

Instead of focusing on three important cases, the Tosha Khana, Al-Qadir University and Foreign Funding case, the PML(N) stretches discussions, press conferences, and op-ed articles on too many issues. It looks that everything is done on a “need basis” instead of with a well-planned transfer of the ball from one hand to another. There was no “Grand Dialogue” or “Grand Talk” kind of shows/discussions arranged through Think Tanks, non-government organizations, and state-run institutions spreading the message that PTI is involved in large-scale illegalities. The Al-Qadir University case is almost dead in the media although Interior Minister Rana Sanaullah raised this case very strongly.

The majority of the multiparty government’s federal ministers always avoid talking about this case in their press conferences due to the possible link of this case with a business tycoon. No series of shows was planned/conducted to tell people step by step and in detail what links Al-Qadir University has with business tycoon Malik Riaz and his money that came from England.

In a chaotic situation where former Prime Minister Imran Khan is building a “morality case” every day against the multiparty government (a recent case is the alleged torture of Shabaz Gill), while the former Prime Minister Mian Nawaz Sharif is sitting in London and watching where the political situation is moving. Will he come back to Pakistan? That is the hot question in corridors of power in Islamabad, but the most important question is: should he come back or not?

Giving huge sacrifices for his party for the last three decades, Mian Nawaz Sharif cannot be happy to digest the results of the Punjab by-elections in which the PML(N) faced momentous defeat and he cannot afford to see the same situation in forthcoming by-elections in which Imran Khan is contesting from almost every seat his party MNA vacated by resigning.

Politically, Imran Khan has nothing to lose if he fails to win the by-elections, but the PML(N) has everything at stake if it fails to win seats in forthcoming by-elections. The defeat of the PML(N) will end all moral justifications for it to stay in power. Almost every impartial writer and analyst is of the view that the PML(N)’s defeat in Punjab was not only because the PML(N) gave tickets to turncoats and its voters rejected the party decision, but also the absence of any narrative it could pitch against Imran Khan.

Another reason was the reactionary media management the PML(N) followed during election campaigns instead of proactive narrative. Even today, cohesion, consistency, and uniformity are lacking in PML(N) media management. One day you can watch eight or 10 press conferences of PML(N) federal ministers against Imran Khan and the next day you do not find a single one. Even pointers of these press conferences differ from each other. The Great philosopher and writer of the first ever “communication method” we find in political philosophy; Aristotle believes that rhetoric is only possible when the speaker confines himself to the same points he raises in his last speech.

I have no doubts over the expertise and credibility of multiparty government’s federal ministers as they have given their lives to their parties and I know several of them personally and that they are focused, excellent orators, and logical; but interconnection among them is not seen and they are lacking consistency and continuity in hammering the wall.

Moreover, media management of a party must not be the responsibility of everybody but the head of the government must take this responsibility by adding other experts from other political parties of the multiparty government. I believe it should be Prime Minister Mian Shahbaz Sharif or party supreme leader Mian Nawaz Sharif who must head the media team of the government because they are going to pay the cost.