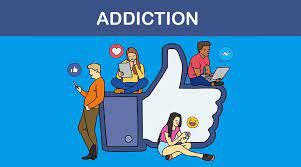 Do you know that we touch our mobile phones 2600 times a day?

Even during research it was found that Indian Smartphones users’ average screen time spiked by 25 percent to 6.9 hours during the covid-19 pandemic. It means that we fix our eyes for 7 hours daily on our smartphones. Sometimes we scroll on social media or are  watching videos on YouTube, even while watching movies on Netflix or doing anything on social media. If you literally waste seven hours a day. It not only impacts your life, study, job, business or hobbies but it also affects your mind for sure. If you snatch someone’s phone, he will be irritated, or start to feel restless or feel stress at times at last. Undoubtedly, it has become an addiction and only a few accept this dark reality.

In reality, social media addiction can be compared with cigarettes, alcohol, drugs and gambling addiction. It is very strange that both cocaine and social media are different things but the addiction caused by both of these in the human body can be compared.The Human body follows the Dopamine Pattern when thereis  addiction to anything. Actually, Dopamine is a neurotransmitter which is formed into our brain. Neurotransmitters’ main duty is to convey messages or signals to the brain. Dopamine is actually directly related to motivation and reward or simply it has the function of anticipation although pleasure booster and pain relieving is connected with endorphins. Dopamine release is a normal process and it is not detrimental. Dopamine plays a very important role in motivation, memory and learning. Its optimum level is very good but it must not be too high or too low. The problem lies where you get your reward and your brain lowers down dopamine transmission. Even it lowers down below the baseline and the same exposure is faced again and again and due to it, a chronic dopamine deficit state is created in the brain when dopamine consistently persists in the lower state. During this, you can not get the same level of pleasure. To get the same level of happiness again, you need more external stimuli. When you get a thing of your pleasure ona permanent basis, your excitementor happiness lowers ultimately. This phenomenon in the world of Psychology is called the Hedonic Treadmill. To get more or the same level of happiness, you have to strive to achieve a bigger goal than the previous one.

The same thing is applicable not only for achievements in one’s life but also applicable for cigarettes and drugs. When a person consumes drugs for the very first time, even a small dose or quantity of drugs gives him a kick and he gets immense pleasure. But, Gradually, he has to use more drugs to get the same level of kick or happiness. So, initially, he starts to consume drugs in a few grams but then the quantity keeps on increasing and at last, he gets addicted badly. Because his level of happiness keeps on decreasing with the same quantity of drugs so dose of drugs will have to increase, to attain the same kick. Social media addiction also does work in a similar manner. When you see a notification on your mobile, your brain expects the same level of reward, dopamine is released. If someone has liked your photo or even made a good comment on your photo, you actually get bonhomie and an instant reward is gathered by you. Your brain writes it down in a diary entry that this thing gave you happiness and you will do it again. But piecemeal, your happiness comes down by seeing just 100 likes and 20 comments, just 2 messages and 10 friend requests are not enough. You need more and step by step you fall for it. The neurological process is the same. But why don’t we get addicted to other things like earning more money or to get other bigger achievements. Why is it only drugs and social media which cause so much addiction? It has two main reasons.

The first is ease of access and second is speedy reward. These are the two risk factors to get addicted to anything. If a person easily gets chocolates daily and in large amounts, he also get addicted because sugar addiction is also a phenomenon. But, in case of clearing highly competitive exams, you don’t get addicted because there is no speedy reward and you have to work hard for years to get the reward. For earning money, if you have an ease of access or quick easy way to earn money with a speedy reward then you can be addicted to earning money like doing corruption and gambling.

This is exactly what happens in gambling addiction. When a person gambles his money, he actually has ease of access, he sees that he can earn money in an easy way and even reward is instant and speedy. So, it is easy to get addicted to gambling. However, doing your job and establishing a business is not easy at all and even it is next to impossible. Because there is no speedy reward and easy access

Now observe these things in the context of social media. Social media and your phone are easy to access. Whether it is Facebook, Twitter or Instagram, you just have to pick up your phone and tap and all three apps will be opened. The second thing is speedy reward, the likes you get on your post and the comments, the messages or the videos you watch on Twitter, YouTube, and Instagram entertain you or become a cause of amusement for you. So, this is the reward.

Tiktok got popularity in no time because of its instant reward of entertainment and ease of access, as it is the biggest as compared to other social media platforms. In TikTok, you don’t have to search videos and even it swipes automatically. Videos are comparatively shorter and 15 to 20 seconds is the best time frame for perfect attention. Therefore, it is more addictive. On YouTube sometimes ease of access stops for a while because you have to search videos on your own. Comparing it with other activities, for example, you have to read a book, it needs patience. Until and unless you read a few pages, you won’t get any reward or entertainment.

In the end, It means that the harder the action, the less the addiction.  A bonus suggestion is to turn off all kinds of sounds on your phone, this way you will not be distracted at all. During a survey, it was found that a person on average unlocks his mobile phone 110 times daily. The easy access factor must be shunned and finished at any cost,  and only that way you can eliminate the addiction of social media from your life because mental calmness is the real thing to lead a simple happy and healthy life.

That’s the way you want to play outside, it will require physical exertion. The most dangerous thing is that all these social media apps companies have designed their apps in such a way that these keep you addicted. These companies have studied in detais that to which things people feel attracted psychologically, to which things people get addicted and feel attracted, or how people will use their apps more and how they will spend more time on screen. Thus, these companies manipulated their apps. These companies consider you as a prey and set net smartly to catch you. These companies paid professionals with bigger paychecks to conduct high level psychological analysis and surveys of people’s interests. From colour scheme to layout button in apps were chosen very cautiously.

There was a time when scrolling was limited on Facebook but now scrolling is infinite. It is natural that everyone wants to explore places, people and things and it takes time and patience as well. The ease of access and speedy reward you get from your phone is much higher and easier than anything. This type of social media addiction is harmful for life in many ways and due to various reasons. The first reason is wastage of time which is only a superficial thing. It causes a rise In radicalisation. If algorithms will show compliance to your will, your political views lie in an echo-chamber. If you like right wing posts then only right wing posts will appear for you and vice versa. Secondly, it increases insecurity and depression. If you see someone on social media, in person you find them different due to the filters used by them to look pretty. Teenagers become anxious and depressed, when they get less likes. Mark Zuckerberg’s Facebook is such an app that has become the precursor for two introverts to start conversation easily leading to exchanging phone numbers and meeting physically. But Yuval Noah Hariri asked Mark if Facebook’s role is to connect people or does it try to keep people hooked to Facebook? But in fact you start to connect with your bosom friends only through social media, actually, that ends the warmth of your relations. Anyways, if the use of social media is in moderation, it can be beneficial as well. The problem is its excess. But how addiction can be prevented is a million-dollar question. The answer lies within the same two things which are easy access and speedy reward. If both of these can be lowered then addiction will also be decreased.

The solution also depends upon the level of addiction. Use these apps in private browser. This will also make the process complicated and eventually, you will try to avoid its use sooner or later.

In the end, It means that the harder the action, the less the addiction.  A bonus suggestion is to turn off all kinds of sounds on your phone, this way you will not be distracted at all. During a survey, it was found that a person on average unlocks his mobile phone 110 times daily. The easy access factor must be shunned and finished at any cost, and only that way you can eliminate the addiction of social media from your life because mental calmness is the real thing to lead a simple happy and healthy life.

October 7, 2022
NEW DELHI: Muslim organisations in India have condemned a mob from a Dusshera procession in Karnataka that allegedly barged inside a madrassah and performed...