The harsh light on judicial appointments will spread to military 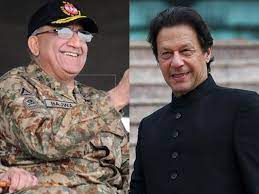 A consequence of the current crisis has been the battering taken by the establishment. It now finds it will not be left out of the political debate, and that its dominant role in the polity is being challenged in ways that have been previously unheard of.

One of the perks of office for the establishment was an unquestioning respect from all sections of society. With that respect did not go fame. The members of the establishment did their jobs in relative anonymity, even where they wielded immense power.

Now the pillars of the establishment have become famous, and the realization of their importance has meant that their ascent to those positions is being examined, as well as the process.

It has not been enough to note with almost ghoulish national curiosity when the COAS is to retire, the possible replacements, and who will make the appointment. The nation’s politics is revolving around this, and PTI chief Imran Khan’s demand for early elections is so that he may win them in time to make the appointment.

That the COAS is responsible for the defence of a long border with a hostile enemy does not seem as relevant as the position he will take in national politics. Now attention has turned to the other pillar of the establishment, the judiciary.

One of the functions of any establishment is self-replication. Therefore, the judges who decide cases must be chosen carefully. This might be one reason why both military and judiciary have been careful to ensure retention of control over the promotion process. The reason given has been to exclude politicians from this process, because politicians are scoundrels. It is perhaps another matter that politicians have been painted as scoundrels by the establishment.

Perhaps the underlying reason is that the military and judiciary consisted at Partition of ‘new men’ who had successfully cooperated with the British and adopted their doctrine of modernization and Westernization. Politicians were not in this mix, and a lot came from the old feudal pre-British elite.  Politicians inherited their positions, while the ‘new men’ manning the military and judiciary depended on merit.

Things could get worse, as judges and generals start being examined microscopically. Establishments are supposed to be benign, guardians of the existing order, providing a framework of stability for all society. However, in Pakistan, an important component of the establishment, the political class, has not been accommodated. As long as these three do not find their respective places, and that too under an agreed constitution, the system will fall further into chaos.

Another major difference was that the ‘new men’ had a well-defined recruitment mechanism they themselves controlled, inherited from the Raj. Politicians, on the other hand, only had the hereditary principle. Fresh blood forced itself on them from such ranks as industrialists. But further recruitment is again hereditary. Nawaz Sharif’s daughter is third-generation rich, but is in politics. The military started off with Ayub Khan, but his son became National Assembly Speaker, his grandson a federal minister. Bilawal Bhutto Zardari can be taken as a representative of the old feudal elite reaching the third generation.

The politicians were never really accepted as part of the establishment. Bureaucrats were a part initially, but were eliminated under Zulfiqar Ali Bhutto. Like China, he wanted to put his party in their place. The military and the judiciary did not comply, and not just the Zia years, the post-1988 era, the Musharraf years, the PTI hybrid model, all followed.

However, certain trends have either emerged or been strengthened. While the military was able to insulate itself from the kind of micromanagement of postings and promotions that the civil bureaucracy has learnt to accept at the hands of civilian politicians, the COAS’s appointment is still to be made by the PM.

The judiciary has also been able to insulate itself, through the mechanism of the Judicial Commission, whose recommendations go to the President through a special parliamentary committee. Previously, appointments were made by the President on the PM’s advice. The PM was assumed to have received  input from the Chief Justice of Pakistan on judicial suitability, and from the Law Ministry on personal suitability (like contacts with foreign countries, personal foibles, political leanings, and so on). The Judicial Commission of Pakistan merely formalizes an existing mechanism.

However, different strands came together in the Chief Justice. He had once been virtually all powerful in appointments, for Prime Ministers (or CMLAs) usually went by the CJP’s recommendations, unless the candidate had some character flaw, or was reported to hold strong political opinions. The agencies played a vital role, and ultimately it was through them that candidates were sought against whom such blackmailing substance was found which could lead the judge to be controlled.

Apart from chairing the JCP, CJPs also have the power of constituting the benches that hear cases. This means that the CJP needs only have two other ‘sound’ judges who will follow his lead, and not try and disturb the smooth flow of the establishment by introducing new-fangled judicial doctrines.

The power of CJPs to form benches has been unchanged, but it has led to the present CJP,Mr Justice Umar Ata Bandial, being severely criticized. He has also found himself unable to make the JCP go along with his proposal to elevate five judges from various high courts to the Supreme Court. If elevated, those judges would also have become CJPs one after another. The establishment assumed that they would be understanding in the matter of elevations and bench formations.

If transparency is introduced for judges, it might be for COAS. And there, questions will then come about elevations to lieutenant-general. Already there have been discussions about the appointment of the DGISI, and of the requirements for COAS. It is perhaps unfortunate that these discussions have nothing to do with potential to command the Army or the ISI, but with political leanings for or against the PTI. It is also unfortunate that the judiciary and the CJP are being viewed through the same lens.

Things could get worse, as judges and generals start being examined microscopically. Establishments are supposed to be benign, guardians of the existing order, providing a framework of stability for all society. However, in Pakistan, an important component of the establishment, the political class, has not been accommodated. As long as these three do not find their respective places, and that too under an agreed constitution, the system will fall further into chaos.

The Chief Election Commissioner provides an opposite example. Mr Sikander Sultan Raja is not being seen as fit or otherwise because of how the ECP has conducted elections under him, but on the verdict in the foreign funding case. His appointment is being called into question, yet another example of how an establishment figure’s appointment is suddenly being given the attention it never got before.

October 7, 2022
Tokyo: Nick Kyrgios withdrew from the Japan Open just before his quarter-final on Friday with a sore left knee, calling it "heartbreaking". The mercurial Australian...