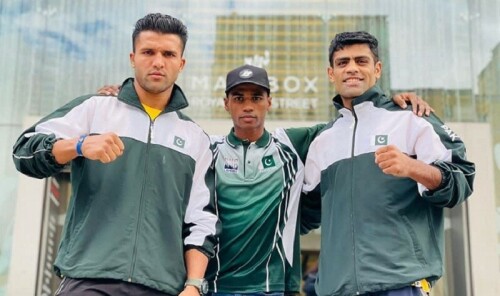 KARACHI: The Pakistan Olympic Association has formed a four-member committee to investigate how two boxers — Suleman Baloch and Nazeerullah Khan — part of Pakistan’s contingent went missing at the conclusion of the Commonwealth Games in Birmingham.

An official of the Pakistan Boxing Federation, without sharing any further information, confirmed the formation of the committee.

The four-member committee will be headed by Mohammad Shafiq, who is the president of the Pakistan Handball Federation. Other members of the committee include a member of the Pakistan Sports Board (to be nominated by PSB), Colonel Sadaf Akram, secretary of the Army Sports Directorate and Lt Col Muhammad Nasir Ejaz Tung, and secretary of the PBF. The committee will initiate the inquiry upon the return of the boxing contingent to Pakistan.

The source, while narrating the incident at Birmingham, told Geo that the team bus from Birmingham to London Heathrow was scheduled to depart at 11:45am with the flight scheduled to fly at 9:55pm.

The two boxers — Suleman and Nazeerullah — were seen for in-house breakfast at 10am but they never reported to the coach for departure.

The team coach requested the hotel management to check players’ hotel rooms where they found the luggage but the players were missing.

The source said that the passports, with six-month valid visa stamped, are with the management of the Pakistan Boxing team.

Pakistani officials have informed the Commonwealth Games Federation and Consulate General of Pakistan of the incident and the federation has alerted the authorities concerned on the matter.