The power of the vote

Imran now has the wind behind him 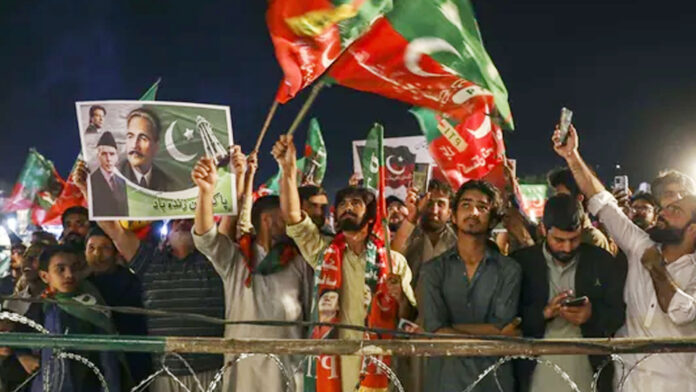 A representative sitting in an assembly has the backing of the majority that has elected him and carries on his shoulders the responsibility of the will of the people who entrusted him with their vote. He may be a single person apparently but in reality, he is the face of thousands of people with a common narrative.

People gave the PTI a mandate to form a government in 2018. Three and a half years into the government, 20 members of the Punjab Assembly who either won on PTI tickets or joined PTI later, separated themselves from PTI, voted against it, and joined the ranks of the opposition.

The future looks gloomy. One misstep from either side can result in a bigger crisis in the future. What steps both these sides take in the coming days are very important. All stakeholders should keep in mind that Pakistan comes first and their decisions should not be fatal for the country

It was against the will of the people of their respective constituencies. The recent results have proved it. But, at the expense of a lot of time and capital.

Both time and capital have been very important for Pakistan of late. Pakistan is among the countries that are at risk of default. The last couple of months have been the most troublesome years in the political history of Pakistan.

For a country in such a critical position, spending millions of rupees on a by-election that would help check the credibility of the decision of disgruntled lawmakers just doesn’t seem reasonable.

The PTI blames the PDM government for the current economic problems in the country. And, with the recent by-election results, it has every right to do so because it has a mandate now as people also think the same.

The Shahbaz-led government till now had been hiding behind the three and a half years performance of the PTI government and blaming it for the economic crisis in the country. It claimed that it had to take tough decisions to bring the economy back on track. However, the people don’t seem to buy this narrative and spare the PDM government for rising inflation and fuel prices. The recent results showed that people think otherwise.

But why would a coalition government of several parties led by PM Shahbaz Sharif want to come to power, take tough decisions and then end up losing in its stronghold?

If it considered it as the saviour of the country that could bring the country out of the economic crisis, and for a second if it is believed to be true, then it has wasted its chance to help the country because the public has rejected it comprehensively and as things currently stand the future looks bleak for it.

But what might be the reason behind the vote of no-confidence? Simply put, it might be a lucrative option for Shahbaz Sharif to see himself as the Prime Minister of the country. It might be an innovative step for the PPP for resurgence and revival in Punjab. And, for Maulana Fazal-ur-Rehman, a possibility to be the president of the county.

The PTI’s win in the by-election has come as a surprise for many. Especially for those who were curious about the establishment’s role. But, whatever the situation may be, we should never disgrace our institutions by dragging them into politics.

On the other hand, the current economic situation in the country and PTI’s narrative on regime change that was accepted by the public predicted a similar outcome.

This win has put the PTI in a dominating position. It can simply dissolve Punjab and KP assemblies and force the government to announce early elections. But if PTI does not go for this option, then it might continue its aggressive campaign against the government. The narrative that has earned PTI a massive victory in the by-election will be built further. But we might see a change in the approach of PTI towards the establishment after this result.

It will make things more complex for the PDM government because it might be the very factor that could have helped the PDM win in the upcoming elections.

But, what are the options left for the PDM government and especially for the PML(N)? The PML(N) has accepted the defeat, but the option of resignation on moral grounds is not likely to happen. The PML(N) would want to continue at least for the maximum possible time. It will not want to go for elections after seeing the latest trend. It would like to give itself enough time to go out in public with something at its back.

For that purpose, the PDM government will try to take steps that will provide immediate relief to the public. It will try to recover the lost ground by taking actions that might provide swift relief but not a long-term benefit. The slashing of petrol prices a couple of days before the by-election is an example.

Pakistan’s economic condition demands long-term actions that can bring the economy back on track. For that purpose, a sustainable and credible government is required. A government that has a fresh mandate to start the recovery process. A government that will be answerable to the public once it completes its term.

We might see the PPP distancing itself from the PDM government in the future after the recent results as it did with the PDM after initially joining it.

Nawaz Sharif might return to Pakistan to revive his party. And with Nawaz in Pakistan and Shahbaz being the Prime Minister, how long would the brotherly bond continue is a difficult question to answer now.

One can hope that wisdom prevails among all the stakeholders so that Pakistan can be prevented from becoming the next Sri Lanka. The political crisis in Pakistan can be potentially much bigger than Sri Lanka. The people are mobilized and charged up and ready to go to any extent and Imran Khan is in a position to lead them while the government is not ready to take a step back as well.

The future looks gloomy. One misstep from either side can result in a bigger crisis in the future. What steps both these sides take in the coming days are very important. All stakeholders should keep in mind that Pakistan comes first and their decisions should not be fatal for the country.