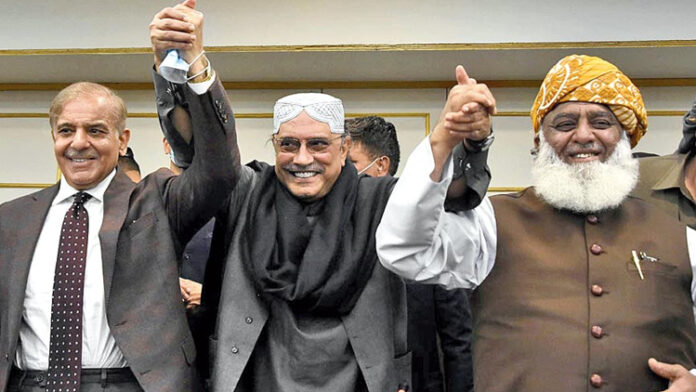 LAHORE: The ruling coalition Tuesday decided not to dissolve the National Assembly (NA) in response to the PTI’s fresh demand for holding early general elections and to continue and complete the stipulated timeframe of the National and Provincial Assemblies.

The decision was taken at a meeting held here and chaired by Prime Minister Shehbaz Sharif and attended by PDM chief Maulana Fazlur Rehman, PPP Co-chairman Asif Ali Zardari and other key political leaders. The meeting was held to review the political situation in wake of the PTI’s thumping victory in the crucial Punjab by-elections held on Sunday.

Informed sources in the PML-N told Pakistan Today that during the meeting, PPP leader Asif Zardari and Maulana Fazl stressed Prime Minister Shehbaz Sharif and other PDM leaders to join hands and make joint efforts continue as any immediate elections would result in landslide victory of the PTI.

“Asif Zardari also assured the meeting that he would not only manage the upcoming election of Chief Minister Punjab and provide adequate number of lawmakers to support Hamza Shehbaz to stay chief minister but he would also make sure to help Prime Minister Shehbaz Sharif to continue as premier,” a source told this scribe requesting not being identified.

The source said that after heated debate, majority of the leaders endorsed the views of Zardari and Fazlur Rehman and it was decided that the incumbent coalition government would not to opt for early elections anytime soon and instead complete their term till August 17, 2023.

The meeting was attended by the top leadership of the coalition allies, including PPP co-chairman Asif Zardari, PDM chief Maulana Fazlur Rehman, JWP leader Shahzain Bugti, MQM-P’s Khalid Maqbool Siddiqui and a number of other leaders.

During the meeting, the allied parties lashed out at the PMLN-led federal government over the rising inflation. The sources told that MQM-P, Awami National Party (ANP), and MNA Mohsin Dawar lambasted the government over its failure to control inflation.

During the meeting, MNA Mohsin Dawar also lashed out at the Prime Minister over failure to give ‘justice’ to Ali Wazir. “Mian Sahab, if you cannot control inflation and cannot give justice to Ali Wazir, so why did you come into power,” he asked PM Shehbaz Sharif.

Following the meeting, PML-N leader and Minister for Railways Khawaja Saad Rafique briefed the media over the decisions taken during the PDM leadership. He said that the coalition government led by Prime Minister Shehbaz has decided that it will complete its constitutional tenure despite a major setback in the Punjab by-polls.

“We came into power in the larger interest of the country… we knew that they [PTI government] had laid economic landmines left for us but we took tough decisions to save the country,” Railways Minister Khawaja Saad Rafique said while addressing a joint press conference following an important meeting of PDM alliance parties and government officials held in Model Town, Lahore to deliberate upon the country’s political and economic situation.

The railways minister said that Punjab by-polls were not a barometer to gauge popularity of any party and added that his party snatched five provincial assembly seats from the PTI in the by-polls.

“Provincial governments also have a right to complete their terms … By-poll is not a barometer of popularity and we snatched their [PTI’s] five seats which shows our vote bank is intact,” he remarked.

Calling PTI Chairman Imran Khan a “misguided and mischievous” man, Rafique said the former had always done politics with the support of ‘umpires’.

“He wants chief justice, army chief and other [heads of institutions] of his own choice in a bid to exercise control over them,” he added.

The ruling party leader said opposition leaders were put behind bars and subjected to victimisation during the tenure of PTI-led government “but the judiciary was asleep at that time”.