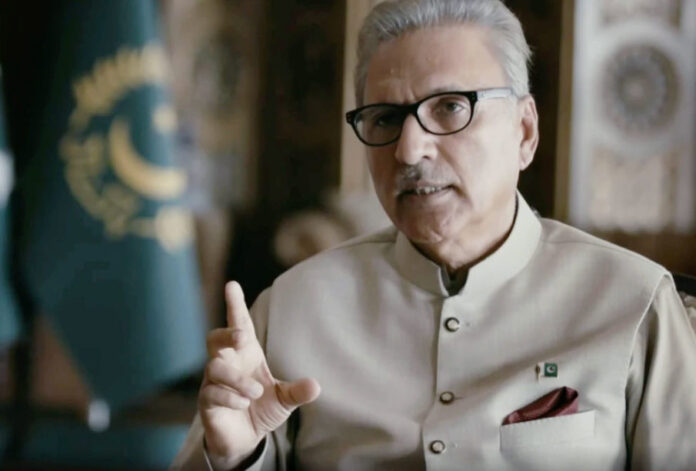 — NA Secretariat to register two bills in its Gazette by today

ISLAMABAD: President Dr Arif Alvi Monday sent back the National Accountability (Amendment) Bill, 2022 unsigned to the Prime Minister’s office, saying the bill, as passed by the parliament, was regressive in nature, and would promote corruption and encourage corrupt practices.

This is the second bill returned by President Alvi which was passed by the Joint Sitting of both Houses of the Parliament. Last week, President Alvi had returned Elections [Amendment] Bill 2022 unsigned.

However, according to the government sources, both the bills, passed by the joint sitting of the parliament, will come into effect, whether or not the president gives it an accent, by today.

An official told Pakistan Today that the president’s refusal to give a nod to the bills was ‘ceremonial’ and the National Assembly Secretariat would register the two bills in the government Gazette by today.

“While the president didn’t sign the two bills, we will register them in the gazette by today or tomorrow, counting ten days from the date of sending the bills to the presidency,” the official said.

In his note attached to the bill, President Alvi said the bill also sent a message to the corrupt, who had amassed tremendous wealth and about which there was no doubt in the minds of the people of Pakistan, that they were not accountable and free to continue plunder.

“Having weak accountability is against the basic rights of the people of Pakistan who are the suffering masses, and, therefore, it is also against the fundamentals of our Constitution,” President Secretariat Press Wing in a press release on Monday quoted the president as saying. The president lamented that the small man would be caught for petty crimes while the corrupt rich would remain free to continue with their abhorrent practices.

The president said that it was sad that rather than structurally improving the institution, the enactment of these amendments was like demolishing the process of accountability without an alternate system being in place, making it sterile and allowing extractive institutions and practices to prosper.

“Weak laws, such as this one, create a facade of justice that blatantly hides a corrupt elite capture, and nations that accommodate such laws ensure very damaging exploitation of the common man perpetuating an unjust society,” he added.

The president reiterated that he personally followed, upheld and abided by the Constitution of Pakistan.

“We must act upon the injunctions of the Quran and Sunnah, and above all, I am answerable to Allah and ask for His forgiveness. Therefore, I painfully state that my conscience does not allow me to sign this Bill,” the president maintained.

The president said that he was aware of the fact, in view of the ‘deeming’ provision under Article 75 (2) of the Constitution of Pakistan, that the National Accountability (Amendment) Bill, 2022 would be enacted into law even if the President of Pakistan did not sign the bill.

While elaborating his reasons for not signing the bill, the president said that the world had struggled to control white-collar crime.

Black money, acquired through tax evasion or through other avenues of crime and corruption, especially by politically exposed persons, did not leave easy tracks or a trail that could be followed, he said, adding the exercise undertaken under FATF itself was an example of decades-long efforts to block all avenues of money laundering.

The president said that this was where we should take inspiration from Islam and referred to an incident frequently quoted as of Caliph Hazrat Umar (RA) who was asked to explain how he acquired two pieces of cloth used in the cloak he was wearing, instead of the one everybody was given.

And because he had it in his possession, he explained the source.

The president said that this incident laid down two fundamental principles of accountability; one, that the onus of the prosecution or the accuser was to make sure that the item, in this case, an extra piece of cloth, was in the possession of the person (Hazrat Umar RA), and second, that the onus to justify the source of the item (wealth) was upon the accused.

While further elaborating, the president said that the principle of justice for all crimes was that a person was presumed innocent until proven guilty.

The exception was that the accused must present a money trail, for example, where and how did he get an extra piece of cloth, any property, or wealth that was in his possession, he added.

This principle was embodied in the NAB Ordinance. The onus of the prosecution was to prove possession and that of the accused was to show the money trail.

The possession of unexplained wealth was a crime in Pakistan until these amendments which have diluted the concept, making it substantially ineffective, he added.

The president said that as had been observed by the superior judiciary, reflecting the general perceptions, that unfortunately, there were flaws in the implementation of the NAB Ordinance.

This law, like all other laws vesting authority in the executive, was abused for political exigencies by those in power.

Because of this reason, along with the role of vested interests, the accountability process in Pakistan became quite ineffective, he observed.

While the public clamoured for the return of looted wealth, the president said, the long judicial processes involved and ineffective prosecution actually made it very difficult to expose, prevent and eliminate corruption.

He said the he believed that a strong effort for improvement was desperately needed.

“Our experiences of the last few decades should have guided us; to modify the law; avoid its miscarriage; close the glaring loopholes, and make it stronger,” he added.

He said what was least expected was that the efforts of some previous governments were dumped and the principle of accountability, though upheld, was weakened beyond recognition.

The president said that it was sad that rather than structurally improving the institution, the enactment of these amendments was like demolishing the process of accountability without an alternate system being in place, making it sterile and allowing extractive institutions and practices to prosper.

“Weak laws, such as this one, create a facade of justice that blatantly hides a corrupt elite capture, and nations that accommodate such laws ensure very damaging exploitation of the common man perpetuating an unjust society,” it was added.