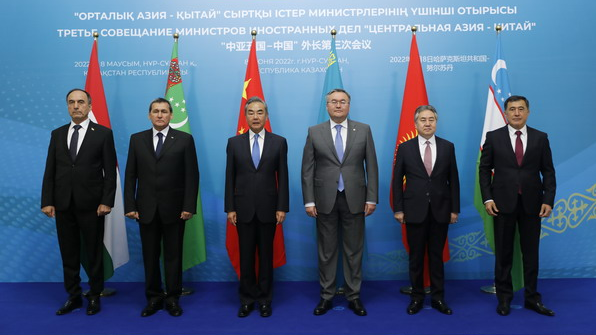 China and five Central Asian countries achieved fruitful cooperation and broad consensus on issues covering the economy, trade and security during Wednesday’s third China+Central Asia (C+C5) foreign ministers’ meeting. Chinese analysts said the outcomes addressed the region’s most acute challenges of an economic downturn and the threat of a “color revolution” following the Russia-Ukraine conflict, and also smashed the US’ recent malicious attempt to pressure Central Asia with ideological tools in order to drive a wedge between China and the region.

Wang said that the most important outcome of the meeting was that representatives agreed to establish a mechanism of regular meetings among the heads of state of the C+C5 countries. The meeting also adopted four documents including on data security, deepening connectivity, roadmap for implementing consensus of video summit between China and five Central Asian nations.

They reached agreement on 10 areas of consensus, including a plan to push forward the Belt and Road initiative (BRI) with high quality, expand local currency settlement, ensure the safe and stable operation of China-Europe freight trains and an integrated industrial chain and a continuous supply chain, uphold security in both traditional and non-traditional fields and work together to combat the “three evil forces” (terrorism, extremism and separatism).

Central Asian representatives thanked China for providing strong support for infrastructure construction, improvement of people’s livelihoods, and connectivity in the region, and they are ready to tap the potential of the C+C5 cooperation mechanism and fully supported the high-quality BRI.

The fruitful achievements of the meeting suggested that future relations between China and Central Asia will be more comprehensive and deeper.

Qian Feng, director of the research department at the National Strategy Institute at Tsinghua University, told the Global Times on Wednesday that Central Asian countries face great challenges in improving their economies and stabilizing supply chains, which were hit hard by the pandemic and the Russia-Ukraine conflict, as well as safeguarding their sovereignty and territorial integrity and dealing with the threat of “color revolutions.” Cooperation with China has addressed the pragmatic and urgent needs of these countries.

The region has also been under great pressure from the US, and some regional countries are worried about possible sanctions from the US over their positions on the Russia-Ukraine conflict, Qian said.

The US has intensified its efforts to form a small clique in Central Asia for its strategic purpose of containing China and Russia, as several of its officials visited the region in April and May to tout its value diplomacy.

Zhang Hong, an associate research fellow at the Institute of Russian, Eastern European & Central Asian Studies of the Chinese Academy of Social Sciences, told the Global Times that the US tried to bring its ideological tools to Central Asia to make the region a new target of the US’ value diplomacy and use it to drive a wedge between the region and China and Russia, which fully revealed that the US’ so-called cooperation in the region was exclusive and its presence served the purpose of strategic competition rather than caring for local people.

But analysts said the US’ value diplomacy can hardly achieve any effect in the region as regional countries were fully aware that the US government’s push in exporting its values of “American democracy” to the region in recent years was the external source of the “color revolution” and political turmoil in the region.

However, China’s cooperation in the region focuses on peaceful development and it does not target any third party but is open to all, Zhang said.

Amid enhanced relations between China and Central Asia, some also tried to view it as a case of increased competition between China and Russia, as many Central Asian countries are members of a Russia-led security bloc. An article posted by TIME magazine said “Central Asia could be the key to driving a wedge between Russia and China.”