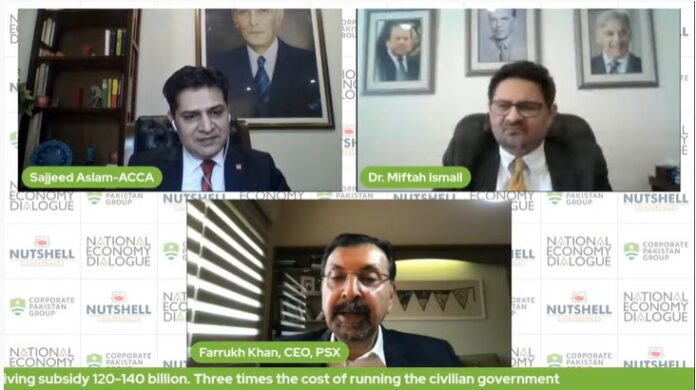 Speaking as chief guest at the webinar on National Dialogue on Economy: The Way Forward for Pakistan, organized by Nutshell Conferences and Corporate Pakistan Group, on Saturday, Miftah Ismail said Prime Minister Shahbaz Sharif is ready to sign the Charter of Economy on a minimum agenda despite different ideologies of various political parties.

He said the growth in the economy is achievable in Pakistan with its huge size of the population but the sustainable economic growth has been a challenge over the period last years, which needs to be addressed mutually by everyone in the government and the private sector. Consistency is the key to economic policy and the present government should honour the commitment made by the previous government as part of the sovereign guarantees of the country and international laws.

Pakistan needs nearly $37 billion for the next year for the purpose of paying loans to various agencies and countries, controlling the current account deficit, and building the required foreign exchange reserves but these could be done only with the signing of a program with the International Monetary Fund (IMF).

Going forward, the government will focus on discouraging import-led growth in the economy, whereas the manufacturing sector should be given preference to enhance exports, Miftah said and added. The government will work on revolutionizing the agriculture sector, which will particularly meet the local demand for food items. He said the government will not impose any ban on traveling, raw materials, and essential items but only on luxury and non-essential items. Also, the tax rate will not be increased on the income of the people, he added.

Former Finance Minister Senator Shaukat Tarin said the Charter of Economy is very important for the country which he proposed many years back. Political differences should be put aside and the economic agenda should be agreed upon. A few of the next months are difficult ahead but the situation will be improved after the general elections, he added. Pakistan needs inclusive and sustainable growth for a long period of time.

In this regard, the saving-to-GDP ratio and tax-to-GDP ratio should be increased with incentives and schemes in the next five to six years. The gap between exports and imports is standing at 12% which should be reduced to 6% and to zero in the next few years, Tarin added. The former minister suggested the central bank and the government to issue new licenses to banks on the basis of regional boundaries.

Ghias Khan, President Overseas Investors Chamber of Commerce (OICCI) said a long-term and consistent policy is in dispensable to attract businessmen and foreign investors. Pakistan should focus on its food and energy security on a priority basis. Also, Pakistan should focus on technology services which has immense potential to enhance exports and local productivity, Ghias Khan.

The country needs to enhance the production of wheat and essential crops for meeting its local demand and boosting exports of agri-products. Further, he added the country is rich in mineral resources which can be translated into its lucrative exports. The investment should be encouraged in the productive sector instead of the real estate: We have to build skillset of the young population to make their role more productive in the economy.

Muhammad Aurangzeb, Chairman Pakistan Business Council (PBC) said the cross-party consensus is very important in Pakistan because the business needs sustainability and the consistency of policy. Hence, the Charter of Economy is the need of the hour, he added.

There is no dearth of thinking prescriptions in the country but we need timely decisions and timely execution, he added. We have to focus on capacity building of our youth in every sector which will ultimately produce results in the economy. We have to make an enabling environment for freelancers, which are growing in numbers in Pakistan.

Farrukh Khan, Management Director Pakistan Stock Exchange (PSX) said the political challenges should be addressed in the first place before going to fix socio-economic issues in the country. The government is focusing on the documentation of the economy but the aspect of taxes should be realized to stabilize it, he added.

Political stability is very important when it comes to attracting foreign investment and boosting local investment in the country said Amjad Waheed, CEO NBP Fund Management Limited. The privatization of the State-owned Enterprises (SECs) as these are eating up over Rs 1 trillion of the valuable revenues every year whereas the government’s expenditures and debt of the country should be reduced gradually, he added.

The yield of Pakistan’s agricultural land should be enhanced which could be done through various measures including farm mechanization and the supply chain management for effective gains of the agriculture sector, said

Maheen Rahman, CEO Infra Zamin. We should focus on energy sufficiency, agriculture and food security, and business efficiency, she added.