Imran to lead march on Islamabad on May 25 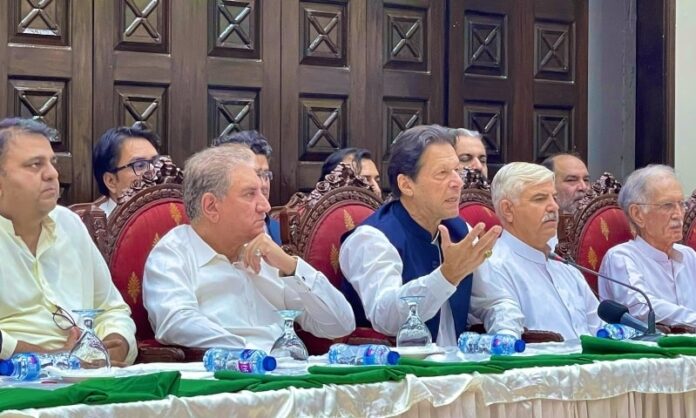 — Urges military to stick to its stated stance of being ‘neutral’

PESHAWAR: Former prime minister and Pakistan Tehreek-i-Insaf (PTI) chairman Imran Khan on Sunday announced to lead a long march towards Islamabad for Pakistan’s “battle for real freedom” on May 25.

Addressing a press conference after his party’s core committee meeting held here, the former prime minister said the main demands for the march to the capital were the immediate dissolution of the National Assembly and a date for the next general election to be held in a transparent manner.

He also told the military to stick to its stated stance of being “neutral”.

“I want to give a little background of how we reached here. There was a foreign conspiracy against Pakistan from the US. In this regime change, they used locals — the most corrupt people, who were ready to become part of any conspiracy to save their corruption”.

“This conspiracy was hatched eight months ago and I was alerted about it in June, and after August, I fully understood what was happening. We did our best that somehow this conspiracy could be voided but unfortunately, we couldn’t stop it.”

The PTI chairman explained in detail his allegations of conspiracy as well as the purpose of his march before announcing the date.

“On the 25th [of May] I will meet you in Islamabad on the Srinagar Highway,” Imran said addressing his supporters and party workers.

“You have to reach there at 3:00 pm. I invite all the women because I’ve seen your anger. I had never seen that before.

“I want people from all [walks of life] to come because this is jihad, and not politics. I’ve decided and told all my team that we have to be ready to sacrifice our lives.”

Imran indicated that the march would convert into a sit-in and continue until his demands are accepted. “We will never under any situation accept them. No matter how long we have to remain in Islamabad we will remain there.”

He said the march would have two primary demands: dissolution of assemblies and a date for elections.

The former prime minister called for fair and transparent elections, adding that if the nation were to bring the current government back into power then he would accept it. “But, no country from outside will [be allowed to] impose them on us,” he added.

Imran told his supporters to prepare beforehand for factors such as “communication, transport and fuel”, predicting that the government would use various obstacles to impede the march.

He stressed that the party had always remained peaceful in its protests, adding that same would be true for the upcoming march, as he called on women, children and families to participate in “Pakistan’s battle for real freedom”.

Addressing the bureaucracy, Imran warned that if any “wrong” actions were to be taken regarding the party’s “peaceful protest”, then that “would be illegal and we will take action against you”.

Khan tells military to stick to ‘being neutral’

Regarding the military establishment, he said: “I also say to my army that you said you are neutral so now remain neutral.” However, he said that he wanted to invite everyone to the march, including the families of civil servants, army personnel and ex-servicemen.

Imran lashed out at the government’s economic management, saying that the rupee and stock market were seeing rapid declines, which would lead to more inflation.

“They don’t have any plan or a roadmap. They can’t take decisions. They fear taking decisions and they don’t want to put a burden on themselves,” he said.

The PTI chief’s announcement came after the party’s core committee held a meeting in the provincial capital earlier in the day.

Prior to the meeting spokesman for the Khyber Pakhtunkhwa government, Barrister Mohammad Ali Saif said Imran would preside over the meeting and many important decisions will be taken in the meeting.

Addressing a public rally in Multan on Friday, Imran had announced that a date for the Azadi March to Islamabad would be decided today during the core committee meeting. He had also announced the expected dates would be between May 25 to 29.

The PTI leader had said that besides deciding the date for the long march, the core committee would also discuss the preparations required for the march.

“The core committee will also chalk out a plan on how to handle the expected arrests of the PTI leaders and road blockages to stop them from marching on Islamabad,” he had said.

Since his ouster as prime minister on April 10, Imran has held a series of large public rallies across the country, terming his ouster a foreign conspiracy and urging the public to prepare for a march to the capital to pressure the authorities into accepting his demand for immediate elections in the country.

Information Minister Marriyum Aurangzeb launched a barrage of criticism at the PTI in wake of the announcement. She said that the decision of elections was one for the government and its allies alone.

“You no longer have any authority over elections,” she said.

“Now is the time to stand firm against this enemy of Pakistan,” she said.

He alleged that Imran and his followers were not “well-wishers” of the public. “Imran Khan cannot hold the whole nation hostage for the sake of his ego,” Hamza added.

“Negative attitudes in politics are detrimental to the stability of the country. Characters working against national interests must be stopped by the force of unity,” he said.

CM Hamza said that decision making was not done in the streets when the parliament is present for that purpose, adding that the nation would not allow anyone to spread “anarchy”.

Speaking soon after Imran made the announcement, PML-N leader Talal Chaudhry and PPP leader Sharjeel Memon stressed that the government would not be “blackmailed” or “pressured” by the long march to carry out elections.

Talal said the PML-N as well as its coalition partners also wanted elections but would announce a date at their own time.

Meanwhile, Memon lashed out at Imran and the PTI, alleging that he wanted to spread “chaos and instability” and hold the government hostage.