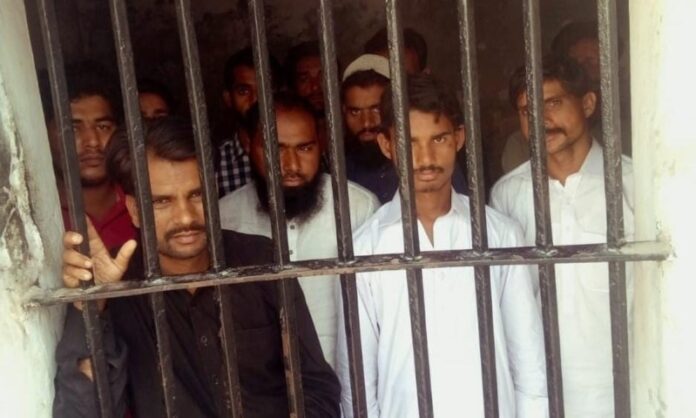 The Punjab police on Tuesday claimed to have arrested 13 suspects allegedly involved in the murder of a papad (rice cracker) seller in a wedding hall in Pattoki.

The incident came to the limelight when footage, allegedly showing Mohammad Ashraf’s body near a seemingly apathetic crowd that continued eating at the wedding, went viral on social media and aroused public anger at the callousness on display.

The first information report (FIR) was registered at Pattoki police station by the deceased’s brother-in-law, Parvez, under section 147 (punishment for rioting), section 149 (every member of unlawful assembly guilty of offence committed in prosecution of common object) and 302 (premeditated murder) of the Pakistan Penal Code.

According to the FIR, the rice cracker vendor, Ashraf, got into a dispute with guests at a wedding procession in Pattoki, after which he was beaten up and dragged inside the wedding hall.

“Severe injustice has been done to us,” Parvez said in the FIR, demanding that action should be taken.

Meanwhile, Punjab CM Sardar Usman Buzdar also took notice of the incident and sought a report from the IGP, saying that the culprits should be apprehended immediately.

“The suspects do not deserve any leeway. Justice should be ensured to the family of the deceased,” he said.

Deputy Superintendent of Police (DSP) Asif Hanif told a news outlet that he formed teams when he got to know of the incident and 13 suspects were arrested, who are being interrogated.

Talking to the media, the Kasur DPO said that last night, some guests of a marriage party allegedly tortured Ashraf to death, adding that the police teams conducted raids in Kanganpur, Pattoki and Sarai Mughal and arrested twelve accused.

He said that evidence has been collected and real causes of the death would be ascertained in the light of forensic report.

The accused are being identified with the help of CCTV cameras, he added.