Why does Pakistan lag behind Bangladesh?’

What happened to Pakistan? 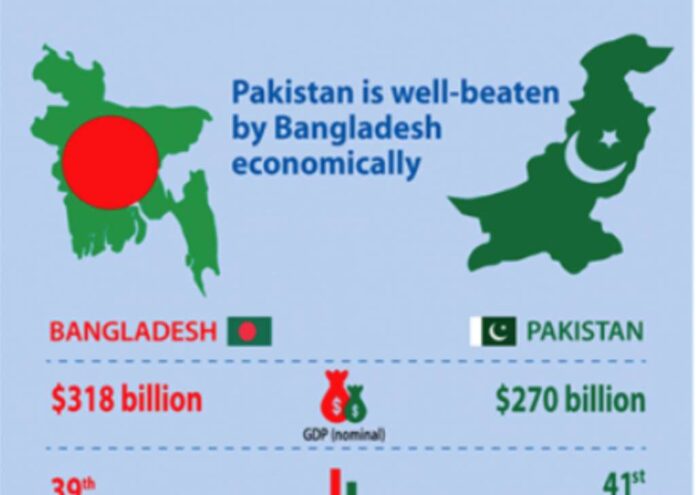 The valid question has been raised about why Pakistan lags behind Bangladesh. The issue is that there has been robust economic growth of Bangladesh despite its once being called a bottomless basket.

Basically, all of us need to find out the real causes of the backwardness of Pakistan rather than of Bangladesh. Pakistani thinkers, media, and politicians should come up with solutions to this valid question. Let’s try to find out the answer. We know that Bangladesh was part of then Pakistan. Then it separated Pakistan through bloody liberation war. That is history. However, the age of Bangladesh is just 50 compared to Pakistan’s 74.

So, it was easy to say that Pakistan should have gone ahead of Bangladesh. But Bangladesh is far ahead of Pakistan in many socio-economic indexes. There are many reasons for this. One of the strong reasons is the ‘Strong Leadership of Bangladesh’. Bangladesh has had the same leader for 18 years. Consistency is good for a country.

Bangladesh PM Sheikh Hasina Wazed tried her level best to move forward the country. She was committed to fulfilling her election manifesot in 2008. After a long vacuum, she showed interest in the implementation of her father’s cherished dream of ‘Golden Bengal’. She is committed to transforming the whole of Bangladesh into ‘Digital Bangladesh’ through her ‘Vision 2021’ and ‘Vision 2041’.

In fact, Pakistan has lagged behind due to social conditions.  According to economists, the property system is such that all property is in the hands of a few. Those who are landlords are the owners of industries, banks, and insurance, import and export, and are the military and civil bureaucrats. As a result, Pakistan is divided into two classes, the rich and the poor.

Since its inception, Pakistan has needed a visionary leader who likes to show dreams and visions. Bangladesh got a visionary leader. For example, when PM Imran Khan was and is seeking a loan from either China or Saudi Arabia, the Bangladesh PM has established an example to lend Sri Lanka, Sudan, Somalia, Maldives. We can see the quondam aid seeker Bangladesh as a lending Bangladesh. On the other hand, defying the critics, PM Hasina Wazed showed her bravery by starting the country’s mega projects. Now Bangladesh is reaping the benefits.

Pakistan’s performance in the social sector is the most disappointing. It is thought that many children do not go to school while gender inequality is constantly increasing. It has the world’s highest infant mortality rate. In the current state of education and health services, 40 percent of children are stunted. But none of Pakistan’s political leaders seem worried!

In fact, Pakistan has lagged behind due to social conditions.  According to economists, the property system is such that all property is in the hands of a few. Those who are landlords are the owners of industries, banks, and insurance, import and export, and are the military and civil bureaucrats. As a result, Pakistan is divided into two classes, the rich and the poor.

The middle class did not develop. Without a middle class, the market for industrial or agricultural products does not develop, nor an entrepreneurial class. Social mobility is not seen. This means democracy cannot be established, and even the slightest possible rule of the people does not last. Common people do not feel that they are citizens. So, Pakistan has a state, but no citizens.

A country can be taken forward by its ordinary citizens, who are both producers and consumers. It goes without saying, women do not have rights. On the Gender Parity Index Bangladesh is 50th out of 153 and Pakistan is 151st. Starting from education, participation in action is very low. In Bangladesh, 36 percent of women participate in the labor market, in Pakistan only 25 percent do.

Another major reason is the lack of education for girls. It has been said that ‘Pakistan did not educate its infant daughters!’ On the other hand, since 2008, Bangladesh’s female power has set an example by emphasizing women’s education and empowerment. Women are now dominating the country’s civil service, army, education system, and industry.

When Pakistan is busy countering the horrific terrorist and separatist movements in Balochistan and KP, Bangladesh is busy developing its rural areas and infrastructure and promoting social safety net programmes amongst poor people. Bangladesh didn’t see a horrific terrorist attack after one in 2016. Bangladesh has a zero-tolerance policy against terrorism, militancy and illegal drug peddling. Although Bangladesh is dominated by Bengalis, it has ensured the rights of all ethnic and religious groups.

Bangladesh is enjoying communal harmony. Pakistan on the other hand is gifted with different ethnic groups trying to dominate each other. Bangladesh has established permanent peace in the country’s once problematic ‘Chittagong Hill Tracts’ through the 1997 CHT Peace Accord.

Bangladesh’s growth is very inclusive. Bangladesh focuses its attention from bottom to up in society. Bangladesh has ensured its tremendous engagement, enrollment, and involvement of all parts in the society such as the integration of autistics, marginalized, destitute, minors.

Bangladesh sheltered more than a million Rohingya refugees. Bangladesh is dealing with the refugee issue properly despite limited resources. On the other hand, although Pakistan has sheltered a lot of Afghan refugees, it has been facing a challenge to deal with them.

Pakistan has zero focus on developing heavy industry, creating an educated workforce, etc. because it would threaten the feudal elites’ source of income.

Pakistan’s economy has faced an inexplicable amount of damage due to the War on Terror. It still hasn’t recovered, and the situation kept getting worse due to the destabilization of Afghanistan.