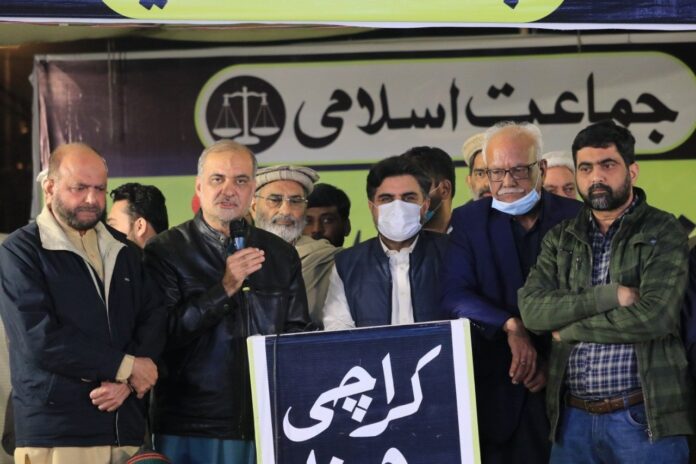 The Jamaat-e-Islami (JI) on Friday announced to end its 29-day-long sit-in outside the Sindh Assembly after the Sindh government agreed to amend the local government act.

The announcement to end the sit-in was made by JI leader Hafiz Naeemur Rehman after successful talks with a delegation of the Sindh government. The delegation of Pakistan People’s Party (PPP) was led by Sindh Minister for Local Government Nasir Hussain Shah.

The two sides also reached an agreement, according to which, the Karachi mayor will be chairperson of the water and sewerage board while all departments of the education and health sectors, including hospitals and dispensaries, will be handed back to the Karachi Municipal Corporation (KMC).

The government also agreed to form the Provincial Finance Commission (PFC) board within 30 days after the LG elections. The elections will be held within 90 days after the local bodies end their current tenure.

The committee formed to review the local government act will meet regularly to iron out differences on clauses on which both parties could not agree as of now, the agreement said, adding that the Sindh government will take measures to restore student unions in Sindh’s educational institutions.

Speaking to media, Nasir said that PPP and JI have agreed to empower the mayor of Karachi.

Nasir requested the JI leadership to end the sit-in as their demands have been met by the
provincial government.

He added the majority of the demands have been met with consensus and negotiations will continue on the other matters to reach consensus.

Rehman congratulated the participants of the sit-in for their movement to empower Karachi and added that the workers had started the protest for basic rights.