The hurdles must be removed 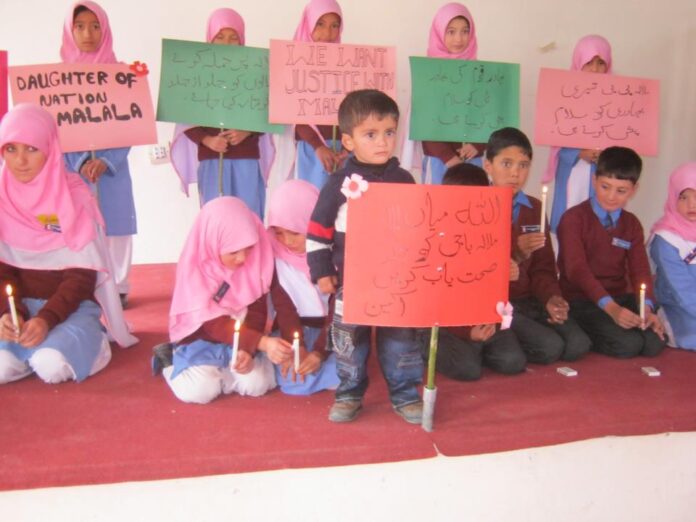 Alif Ailaan reports 76 percent of Balochistan’s girls as out of school with a primary enrollment of 322,000 girls; of whom only 20,046 persist after they finish their matriculation. With only a few high schools and 41 inter and degree colleges for girls in the province, accommodating more than 300,0000 students would mean to average more than 120 students per class; absent teachers, poverty, long distances and non-availability of much-needed facilities such as sanitation, add more to the worries of female students, leading them to quit their education in disappointment midway.

Balochistan is the richest-in-resources province of Pakistan with a small population of 12.34 million, but still the most neglected among all the four provinces – especially when it comes to education, health and employment. Girls, in particular, are going through challenging times owing to a criies of educational facilities despite the constitution of Pakistan, and the human rights charter of the United Nations, declaring education as a basic human need.

Last week, we witnessed college girls from Shahrak, Shapuk, Sami and Herronk (villages in the east of Turbat some 28, 34, 44 and 60 kilometers away from the city respectively) appear in Turbat Press Club to hold a press conference on lack of transportation. They complained that their college bus, which was functional prior to the summer vocations, had been kept in store in the name of being out of order. The students said in their press conference that they went to the college principal to ask her to repair the bus, but she excused and said it would cost Rs 600,0000 and the college account was already in debt for Rs 800,000.

Only 24 percent literate women cannot take Balochistan to that higher level of development which is a prerequisite to change the fate of the province. Iit needs both men and women to make a difference in the everyday life of the people of Balochistan,and  keeping most of the girls intentionally away from education can only worsen the already declining education system of the resourceful province. However, it is yet to be seen if the provincial government, with the help of the federal government, brings about possible reforms in the girls’ education of the province in one or the other way to get more girls enrolled in educational institutions

It astonishes one to discern a government college admitting being in arrears of around Rs one million and the government is nowhere in the picture. If it is really so, one wonders, how about the annual budget which the college receives? The students, while addressing the media personnel, accused the principal of bagging the budget and making excuses of loans. Meanwhile, the government officials have maintained silence over the grave concern so far.

Balochistan’s poverty ratio is not a secret from anyone: Mr. Zahoor Ahmed Buledi, the provincial minister for planning and development, and the representative of the constituency in question, furnished the report of the multi-dimensional poverty index in a recent “One Day Advocacy Workshop on Poverty Dynamics, Inclusive Development and Women’s Empowerment” on December 8 that  the province’s “over 70 percent people are living in poverty”.

On the other hand, the college girls of the above-mentioned villages have to pay 4,000 monthly to hire a car to take them to the college in Turbat. Amidst such a tensing realm, how can poor parents send their girls to college when they have no other option left? It ultimately leads them to stop their girls from going to college and prefer spending the money on raising them.

One of the remaining options for the college girls of Turbat to pursue their education in college level, as it was previously, is to solely appear in the examinations and continue their self-study from home so that they may secure admissions in a recognised university after their intermediate, but the principal has issued orders to strike off the names of the absent students. “We are given an ultimatum to get our names re-admitted by ensuring our presence in college and paying the fine of Rs 500 which our parents cannot afford,” protest the students in the press conference. Such a tactic, on the other end, unfortunately, would encourage the parents of these girls to put a stop to their children’s educational careers.

It is not the first time girls had to confront issues to carry on their education. Long distances have always hindered them from getting an education, especially the girls of rural areas. One will always observe more than one child in a family in Balochistan who are studying; including both girls and boys. The parents, owing to reasons such as to long distances and poverty, can afford merely to educate one or two among their children. In such a dilemma, they prefer educating their sons over their daughters from whom the parents keep a hope of heir becoming supports in old age. Girls, on the other hand, are, called ‘guests’ by their parents who would have to leave once married. Although they deeply wish to educate both their children, looking at their gross incomes, they are merely left with one option.

In such times, it is the government who has to come forward to fix the problem, for example, by introducing various policies to enroll more and more girls to schools, establishing girls’ primary, middle, high schools and colleges near their homes, or at least managing transportation for them, or rendering them monthly stipends (which Balochistan’s chief secretary announced in October last year but which never happened practically) and so forth. But that too requires the government’s willingness to curb such a growing menace of illiteracy among the girls of the region.

Balochistan is already speaking out about getting a fair literacy rate. Only 24 percent literate women cannot take it to that higher level of development which is a prerequisite to change the fate of the province. Iit needs both men and women to make a difference in the everyday life of the people of Balochistan,and  keeping most of the girls intentionally away from education can only worsen the already declining education system of the resourceful province. However, it is yet to be seen if the provincial government, with the help of the federal government, brings about possible reforms in the girls’ education of the province in one or the other way to get more girls enrolled in educational institutions.