Theological roots and politics of TLP

Barelvis are not pacifists as has been assumed by some 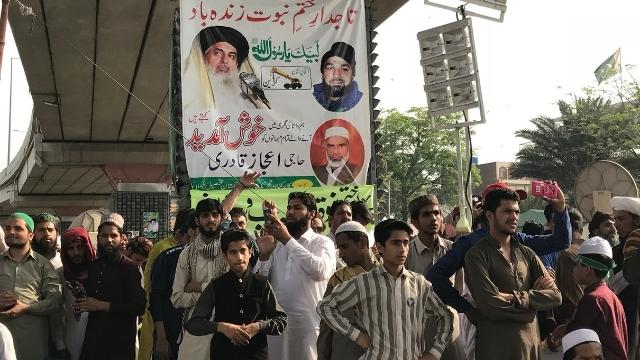 Pakistan got independence in the name of Islam. Pakistan is a Sunni-dominated country having further sub-divisions in the Sunni sect. There are three prominent Sunni groups such as Salafi, Barelvi, and Deobandi. The Barevwi faction is at the top as it constitutes 75-80 percent of the total population, while Deobandis and Salafis, also called Ahle Hadith constitute 20 percent and 5percent respectively. Unlike Deobandis and Salafis, Barelvis perceive Sufism as an unavoidable part of Islam. Love of Prophet Muhammad (PBUH) is central to the Barelvi creed. They maintain that Prophet Muhammad (PBUH) is created from the light of God (Nur). He (PBUH) is omnipresent, alive, and infallible. Barelvis celebrate the birth of Prophet (PBUH) and Urses of Saints. The Deobandi group is at odds with the Barelvi over the superhuman characteristics the latter have attached to the Prophet (PBUH).

As we know that the Tehrik Labbaik Pakistan (TLP) follows the Barelvi tradition, so we have to focus on Barelvi roots of TLP. The erosion of the Mughal Empire since the early 18th century was being taken as a loss of Muslim power. Furthermore, the 1857 War of Independence’s failure left the religious scholars or ulema shocked. They construed it as a result of a moral crisis among Muslims and felt the need of revitalizing the Islamic faith. To revive faith, religious scholars preferred the unsullied and original form of the Islamic version. The bid to revive or reform religion resulted in various movements like Ahle Hadith and Deoband in the Subcontinent.

Gradually, as colonialism got more currency, Sufism came under extreme criticism. The vociferous critics of Sufism were influenced by the ‘Enlightenment’ or ‘The age of reason’. Modernists took Sufism contrary to rational thinking and reformists thought that Sufism was not a part of pure version of Islam.

Palpably, another Sunni sect, ‘Barelvi’, came into being in the 19th century. This sect emerged to defend Sufism and Syed Ahmad Raza Khan (R.A) spearheaded the Barelvi movement. He was a Sufi of Qadriya order and presented Sufism as a crucial part of Islam. He answered various questions akin to Sufism which were raised by the opponents. Usha Sanyal in her book, Ahmad Riza Khan Barelvi; in the path of the Prophet writes that Ahmad Raza Khan was of the view that “the saints are intermediaries between the believer and God in a chain of mediation that reaches from each pir to the one preceding him, all the way to the Prophet and thence to God”. Similarly, there was another controversy among the Muslim reformers regarding the belief in the intercession of saints with Allah on behalf of common people. Ahmad Raza Khan was in favor of the saints’ intercession.

In his second visit to Mecca in 1905-6, Ahmad Raza wrote three Fatawa. One of them was Al-Dawlat-al-Makkiyya bi’l Maddat-al- Ghaybiyya. It was written on the “Prophet’s knowledge of unseen”. This was a topic of much debate between Ahmad Raza Khan and Deobandi Ulema. Ahmad Raza Khan explained the Prophet’s and Allah’s knowledge in a very explicit manner. Usha Sanyal mentions Ahmad Raza’s ideas that “One (Allah) is the source of knowledge and other (Prophet S.AWW) is dependent upon it. In Allah’s case, the knowledge is zaati (personal) and in the second case, it is ata’i (gifted)”. He further postulated that the “Prophet also knew what was going on inside people’s minds. Even he was aware of the fears and intentions of people”.

To dispel all the doubts of opponents regarding the Prophet’s knowledge of the unseen, Ahmad Raza resorted to the Quran. He presented verse 179 of Surah Aal e Imran and verse 26-27 of Surah Jinn as an argument in which Allah says that he gives secret knowledge to those he wants among his chosen ones. So, Ahmad Raza Khan issued many Fatwas to answer the various questions regarding Sufism, fasting, prayer, pilgrimage, and relations with other groups of Muslims and non-Muslims. Following the death of Ahmad Raza Khan Barelvi in 1921, Barelvis laid the foundation of the All India Sunni Conference to expand its influence in the Subcontinent.

So, the analysis of TLP’s roots suggests that from the emergence of Barelvi sect to the creation of Pakistan, there were ideological differences but unavoidable support to Deobandis, and a sense of alienation among Barelvis after Pakistan’s creation led to Barelvi militancy. Now, Barelvi militancy has further changed into politics on sensitive issues as TLP is doing.

As far as Pakistan’s establishment is concerned, Thomas K. Guglar in chapter 13 of the book Faith-based violence and Deobandi militancy in Pakistan writes that “The Barelwis were among the first to support the Pakistan Movement and the demand for an independent Islamic state. In contrast, the Dar-al-Uloom Deoband and the majority of the Deobandi clerics opposed the creation of Pakistan and interpreted the project of establishing a Muslim state as an obstacle against the Islamization of India as a whole. Ironically, Islamic state politics in Pakistan was mostly in favor of Deobandi, and more recently Salafi, institutions”.

Maulana Shabir Ahmad Usmani was leading a small pro-Pakistan faction of Deobandis. His party All India Jamaat e Ulema Islam turned into Markazi JUI in 1947. Similarly, the Barelvi party All India Sunni Conference transformed into Makazi-Jamaat-i-Ulema-i-Pakistan in March 1948. After the inception of Pakistan, Deobandis who were in favor of Pakistan’s creation played a more imperative role in Pakistan’s politics than Barelvis. Maulana Usamani was selected in the constituent assembly.

The Barelvi party (MJUP) was not happy with the emerging nexus between the Deobandi Party (MJUI) and AIML. Ayub Khan’s bid to introduce a ‘modernized’ form of Sufism and his establishment of the Auqaf department to bring the shrines under state control left a negative impression on Barelvis. Until the 1970s, the Barevwi party (JUP) could not get sufficient attention vis-à-vis Deobandis. Zia ul Haq’s alliance with Deobandi institutions and the creation of the Taliban led to further dominance of Deobandis.

Occupation of Barelvi mosques by Deobandis and Barelwi’s little political representation led them to take arms in hand for securing their rights. This sense of alienation paved way for a militant group, Sunni Tehreek, in 1990. The slogan of this militant group was that ‘we will sacrifice our youth to protect our mosques’. Then Deobandi-Barelwi conflicts became rife. Both targeted each other’s leadership. Musharraf’s bid to use Sufism or Barelwism to counter Deobandi militancy could not work more. Furthermore, PPP also used Barelwism to combat the Talibanization of Pakistani Society but to no avail.

Arslan Ahmad and Bilal Zafar Ranjha have explicitly explained the Barelwism’s turn to militancy. In their research paper titled “Salafising Barelwiyat: Salafi Doctrine of Al Wala’ Wal Bara and TLP politics in Pakistan”, they mention that “After the incident of Nishtar Park (2006)  (in which Abbas Qadri, the Sunni Tehreek leader with his followers was killed), Asia Masih case (2009) and assassination of Salman Taseer (2011), the Barelwis who engaged in militant activities for self-protection have changed their policy from militancy to the process of activism around the issues of Namoos-e-Risalat and Ishq e Rasool (PBUH). This has made them powerful to the extent that they can challenge the writ of state whenever they want”.

In addition to this, the researchers maintain that TLP is following some of the elements of Salafist ideology “Al-Wala’ Wal-Bara” which directs to love those Muslims who follow your way of thinking and abhor non-Muslims along with Muslims who are against your ideology. The case of Dr Tahir ul Qadri is in point, who was badly criticized by the TLP leader Khadim Rizvi for condemning the killing of Salman Taseer.

So, the analysis of TLP’s roots suggests that from the emergence of Barelvi sect to the creation of Pakistan, there were ideological differences but unavoidable support to Deobandis, and a sense of alienation among Barelvis after Pakistan’s creation led to Barelvi militancy. Now, Barelvi militancy has further changed into politics on sensitive issues as TLP is doing.