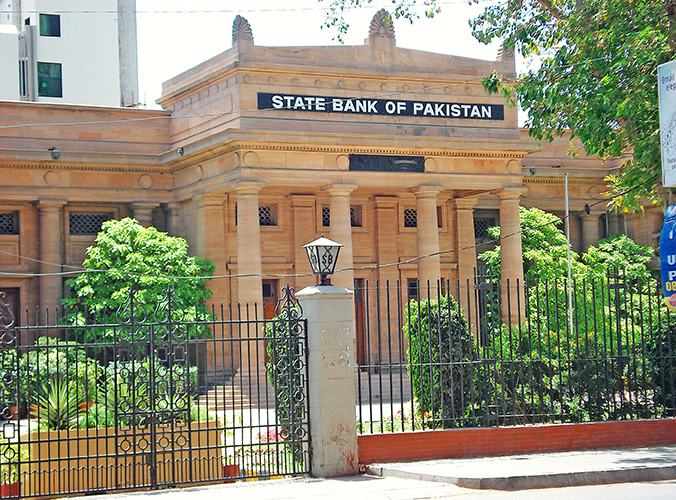 KARACHI: State Bank of Pakistan (SBP) has issued a report to suggest that the country’s economy rebounded during the fiscal year 2021-22 with real GDP growth rising to 3.9%.

In its annual report titled ‘State of Pakistan’s Economy’ — which reviewed FY21 — the central bank stated that the expansion in economic activity was accompanied by a 10-year low current account balance that contributed to a significant build-up in foreign exchange reserves.

“The fiscal deficit also edged down despite COVID-related spending, leading to an improvement in the public debt-to-GDP ratio, unlike the experience of most countries across the world,” a statement issued by the SBP read.

Per the report, headline inflation — based on the consumer price index (CPI) — also eased during the year mainly due to “relatively stable prices of non-food and non-energy items.” However, overall price levels, especially of food items, remained high owing to supply-side challenges.

Furthermore, average headline CPI inflation fell to 8.9% in FY21 — within the SBP’s forecast range of 7-9%.

“The resurgence in domestic demand did not translate into inflationary pressures amidst the presence of some spare capacity in the economy,” it stated.

It is pertinent to mention here that the inflation remained volatile during the year, because of the impact of the increase in fuel prices and power tariffs.

The report notes that the economic turnaround was facilitated by management of the COVID health pandemic, as well as a prompt and targeted monetary and fiscal response to counter its impact on economic growth and livelihoods.

The SBP’s liquidity support amounted to around 5% of GDP by the end of FY21, featuring a combination of policy rate cuts as well as several targeted and time-bound measures, such as the Temporary Economic Refinance Facility (TERF) for promotion of new investment, Rozgar payroll financing scheme to prevent layoffs, the Refinance Facility to Combat COVID to provide concessional financing to construct hospitals and facilities to fight against COVID, and temporary loan deferments and restructurings to provide temporary liquidity relief to small and big businesses as well as individual borrowers.

The report highlights that a broad-based recovery in real GDP growth was recorded. Led by the favourable supply and demand dynamics as well as a low base effect from the COVID-led contraction in FY20, large-scale manufacturing posted a 14.9% increase in FY21.

It further revealed that although the growth in agriculture was slightly lower than in FY20, the production of wheat, rice and maize rose to historic levels.

“The cumulative increase in the production of these crops offset the decline in cotton production,” it noted.

“The improvement in the commodity-producing sectors and a surge in imports led to a sharp recovery in wholesale and trade services in FY21,” the statement read.

The central bank’s report also notes that the economic rebound was achieved without a worsening of macroeconomic imbalances, as the overall policy mix was still prudent.

The current account deficit reduced substantially amid record-high workers’ remittances and export receipts and contributed to the $5.2 billion increase in the SBP’s foreign exchange reserves during the year. The country also retained access to sizable external financing, with inflows received from the IMF and other multilateral and bilateral creditors; the issuance of Eurobonds after a long hiatus; and deposits and investments from non-resident Pakistanis via the Roshan Digital Accounts.

May 23, 2022
Does man possess free will to choose his course of action? Does God know all along everything that is ever going to happen? If...