India, AUKUS and the QUAD

Where does India fit in? 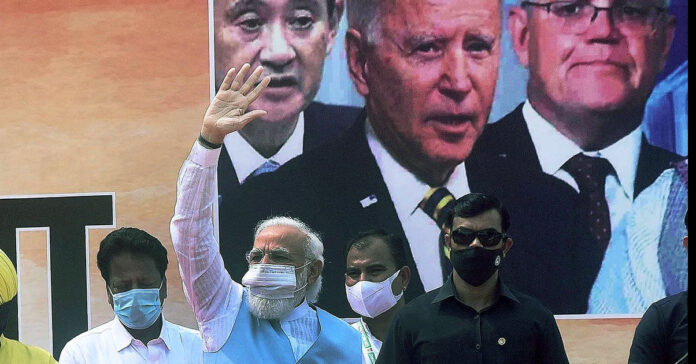 World geopolitics has changed rapidly from West toEast, and the Asia-Pacific region has become more important to the USA. The region is now considered the engine of the world economy. Major Asian countries are emerging as good actors in the global economic and political arena.

The importance of Asia has increased a lot in the last decade. The three major geopolitical players and military powers of the world – the USA, China, and Russia – are trapped in a triangular relationship that is very complex. Will it be like two friends finishing the third one together?

The USA is in conflict with China and Russia. China and Russia, on the other hand, have been strategic partners; The USA is strengthening NATO’s opposition to Russia, as well as strengthening ties with Asia-Pacific nations through the UKAUS Agreement and the Quad Security Dialogue. Beijing and Moscow have begun to jointly set up an informal forum to oppose the USA and its allies.

Beijing and Moscow conducted the first joint patrol using warships in the western part of the Pacific Ocean from 17 to 23 October. Russia’s Defense Ministry said in a statement that the joint patrols were aimed at displaying the state flags of Russia and China, maintaining peace and stability in the Asia-Pacific region, and safeguarding the maritime economic activities of both countries. This patrol also seeks to understand what Japan and other states have to say.

Although Chinese and Russian warships did not violate international law. Chinese state TV has broadcast how close they came to Japanese territory. It has sent a message not only to Japan and Washington but also to the countries of AUKUS and Quad. Russia is a strong and reliable partner of China in the western Pacific.

This year, the USA has stepped up spying activities in the South China Sea, and a joint anti-submarine operation by China and Russia has caught everyone’s attention. The US nuclear submarine crashed on October 2 at the bottom of the South China Sea. Three officers, including the commander of the submarine, were fired. China says submarines have been sent there 11 times in the past year. The USA has the world’s largest number of submarines, 68, all of which are nuclear-powered. If America wants to conduct a strategic blockade; China and Russia could break the US strategic blockade and military blockade by consolidating their positions and consolidating their powers.  It seems that they have adopted that goal.

In order to maintain its strategic interests, China must bring its navy into the deep sea. The PLA will practice combat capabilities in deep water. AUKUS has been formed to challenge strategic competitors such as China and Russia, and arrangements have been made to send Australia to the front line.  However, Australia does not have the opportunity to fight on the front line with Russia. Russia will take this opportunity. Taiwan, on the other hand, will attack China as soon as it lays its hands on the cocoon;

It seems so. The Quad and AUKUS alliance do not seem to be able to bring China-Russia in the bag in any way.

If war breaks out, North Korea will rush to China’s aid. Perhaps its first target will be the islands of northwestern Japan and areas such as Guam in the USA. And given the UK’s defense spending, it looks like they will be struggling to deploy naval forces for a long time. The days of relying too much on France are over. In the AUKUS deal, Macron called Morrison of Australia a “liar” and a “traitor”.

The USA and its allies do not want the “myth” of a powerful Western alliance to be destroyed or brought down by any country. But they also need to understand India is not in the Pacific. Thus, increasing the joint strength of the Quad and Indo-Pacific Rim may not go far, and the position of the countries concerned may change.

The Cold War between China and the USA is now raging on multiple fronts, in the South China Sea, in Afghanistan, in Central Asia, in parts of the Middle East, in Eastern Europe, in Africa, and in the Pacific. But it seems that the hot front of this Cold War is between India and China. In the meantime, more than 1000 sq km of Indian land have been lost, which are unlikely to be regained.

In Ladakh, India does not have much of a response to China, let alone in Sikkim or Arunachal Pradesh. Scholars do not see the closure of dozens of Chinese applications and restrictions on Chinese companies as the right steps to recover real land and prevent the deaths of uniformed soldiers. There is a lot of talk in the media and in the Indian Parliament about this.

What can India do now? It could be a good option if India dares to hold on to the Malacca Strait. This route supplies Chinese oil. By creating significant barrier on these trade routes, India can introduce war tactics. Will India do it? The result was a flurry of invitations to China. It is nonsense to say what a terrible form Chinese sea aggression will take. Meanwhile, the Pentagon has been forced to recognize that China’s fleet and navy are the best in the world.

China is also aware of the risks involved in the Malacca route. China has already begun to look for alternatives; Any other route to the Indian Ocean for trade and oil supply lines.  There are currently two options available; the first is through CPEC, it will be China’s most convenient access route to the Indian Ocean; The second is the Thai Canal, across the Kra Isthmus in Thailand, the narrowest point on the Malay Peninsula, which will open the second sea route from China to the Indian Ocean. This Thai canal, or Kra Isthmus canal, will allow the Chinese navy to quickly move ships between its newly built South China Sea bases in the South China Sea and the Indian Ocean. The Malacca Strait will cover more than 700 miles across Malaysia, and China is paying Thailand up to 30 billion to build the canal.

Once these two paths are implemented, China will be able to completely break the backbone of the Indo-Pacific dream of shrinking its Belt and Road initiative in the region.

Earlier, the concept of ‘Indo-Pacific’, built on India’s commitment to deal with China in the region, was launched in 2018. In particular, on May 30, 2018, US Secretary of Defense Jim Mattis announced that

the Pentagon’s Pacific Command would be renamed the “Indo-Pacific Command,” which would give India a greater role in the Pacific theater to control and resist China. This was a significant policy change for Washington. Analysts have shown that Delhi has assured the Pentagon that it would act as a weight on China in the Pacific theater and destabilize China’s economic interests in the region- especially the CPEC project.

No one knew how much India would be able to keep its promises. Could it really serve as a counterweight to China? Can it help the USA “control” China and its growing power?

However, nothing happened in 18 months. While China is infiltrating through the border of Indian-occupied Ladakh, claiming important vantage points of Pangong Lake and Galvan Valley, there has been no real resistance from India. Once, when India tried to put pressure, it lost 20 troops, but did not get back an inch of land.

According to various Indian reports, the Chinese entered Ladakh without any resistance from the Indian Army and refused to discuss the return of territory. Encouraged by Chinese actions, Nepal claims territory within the Indian border, while Nagaland and the eastern regions also speak out against the Indian Union. Bangladesh has signed a pledge with China to join the BRI. Sri Lanka has leased the port of Colombo to China. China has provided strategic support to Myanmar. Iran has signed a long-term strategic agreement with China. The Taliban are in talks with China in an effort to rebuild Afghanistan. In Sikkim, too, Chinese border pressure has increased. Gwadar in Pakistan and Chabahar in Iran have continued their activities without any resistance.

In this situation, further consideration should be given to the position of the whole Indo-Pacific concept.  The media has raised the question, what advantage can India give to the Chinese in the Pacific if they cannot reclaim even their own claimed territory from China? If its forces cannot confront the Chinese military in Ladakh, can India really send warships to the South China Sea or be confident of disrupting the CPEC route?

The USA and its allies do not want the “myth” of a powerful Western alliance to be destroyed or brought down by any country. But they also need to understand India is not in the Pacific. Thus, increasing the joint strength of the Quad and Indo-Pacific Rim may not go far, and the position of the countries concerned may change.