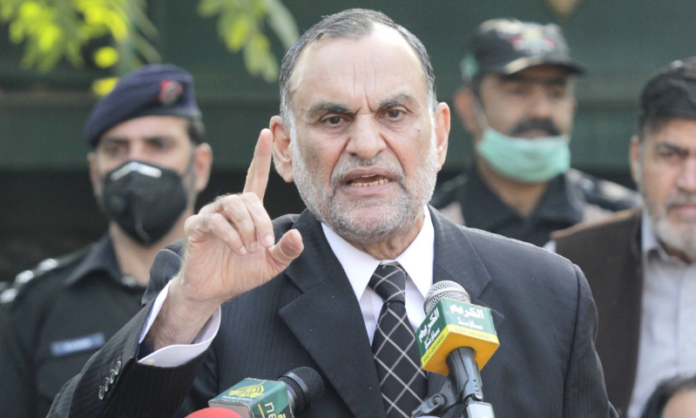 ISLAMABAD: Minister for Railways Azam Khan Swati appeared before the Election Commission of Pakistan (ECP) on Thursday to explain his caustic remarks against the body.

The commission first served notice on him on September 16, asking them to provide within week evidence of the charges of “bribes and always rigging” the elections they had levelled against it and Chief Election Commissioner (CEC) Sikandar Sultan Raja.

In September, during a meeting of the Senate Standing Committee on Parliamentary Affairs to discuss proposed amendments to the Elections (Amendment) Act, 2021, Swati came down hard on the agency and said it should be “set on fire” for making fun of the government and “ruining” the democracy in Pakistan.

Responding to Swati, the ECP rejected his allegations and decided to demand evidence from him in this regard.

The ECP members also expressed anger over ministers for accusing them of taking bribes. The allegations are baseless and unacceptable as the ECP is a constitutional department, they said.

A large number of the Pakistan Tehreek-i-Insaf (PTI) members reached the rostrum during the hearing. The panel directed the party workers to stay away from the rostrum.

During the hearing, Swati’s counsel told the commission they did not receive a second notice and asked it to serve it on them again so they could respond to it.

The counsel also urged the commission to not indict him and let him submit a reply to the show-cause notice at the next hearing.

The panel adjourned further hearing of the case until November 16.