A golden chance for Pakistan 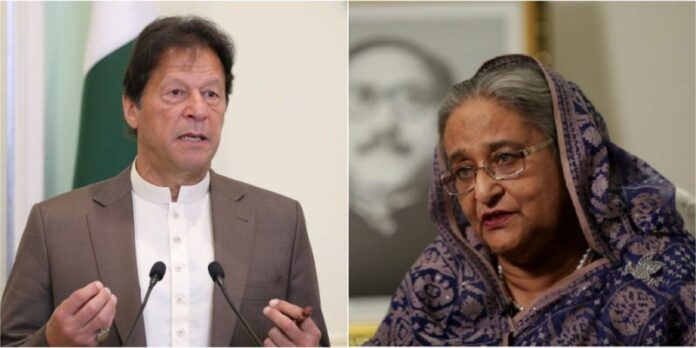 Sheikh Hasina also reiterated her government’s desire for stronger trade ties and economic collaboration with Pakistan. And that is the peak of the practice. Recent relations between Pakistan and Bangladesh from 2013-2020 have not been good, but in the changed situation, this time the opponent, Bangladesh invited Pakistan. Thus, Pakistan should pave the way to smooth the strained ties. Policymakers of Pakistan should visit Bangladesh as soon as possible to pave the way.

Recent incidents in Bangladesh surrounding the violent acts during the Hindu festival of Durga Puja have indeed created some distance between New Delhi and Dhaka. This followed issues like India’s National Register of Citizens and the Citizenship Amendment Act, which had already caused tension between Bangladesh and India. Delay in the resolution of long-pending issues like the signing of the Teesta water-sharing deal despite Dhaka’s persistent demands, the killing of civilians across the Bangladesh border, as also the onion crisis, have sowed some distrust between the two longtime friends. Pakistan must utilize this opportunity.

Relations with Pakistan were strained almost seven years ago over the trial of crimes against humanity committed during the 1971 war of liberation. Pakistan then opposed the trial. Against this background, the two countries reciprocally expelled diplomats for non-diplomatic behavio4r. The post of Pakistan High Commissioner in Dhaka was vacant for almost two years from February 2016. High Commissioner Imran Ahmed Siddiqui came to Dhaka in January last year after the Bangladesh government approved  his agrément (letter of acceptance). He met the Prime Minister for the second time on October 2021 after taking charge.

Bangladesh-Pakistan relations have been deteriorating since 2009. Relations between the two countries continue to deteriorate. However, from 2020, Islamabad-Dhaka began to come closer. And then this invitation seems to be quite significant.

Such an incident has taken place in the diplomatic context of the world, as is now being practiced in the international arena. A few days ago, Imran Khan also invited Sheikh Hasina to visit Pakistan. The influential Hindustan Times published a report in its Bengali edition on October 28.Earlier, in a meeting with the Prime Minister on December 3, the High Commissioner also expressed Pakistan’s interest in advancing relations with Bangladesh.

Pakistan wants to improve relations with Bangladesh. The country’s Prime Minister Imran Khan has already sent a message to Prime Minister Sheikh Hasina. A few months ago, President Arif Alvi ordered the Pak Envoy Imran to bolster the ties between Pakistan and Bangladesh during the meeting in March, 2021. Prime Minister Imran Khan had in July, 2021 spoken to his Bangladesh counterpart over the phone and expressed his government’s desire to “deepen fraternal relations on the basis of mutual trust, mutual respect and sovereign equality”. Then there was Pakistan and Bangladesh’s mango diplomacy with each other in July and August.

High Commissioner Siddiqui handed over the message to Prime Minister Sheikh Hasina at Ganobhaban on October 25. On the other hand, Prime Minister Sheikh Hasina highlighted Bangladesh’s policy of maintaining good relations and friendship with all.sHHe said Bangladesh’s foreign policy formulated by Father of the Nation Bangabandhu Sheikh Mujibur Rahman is ‘friendship with all, not enmity with anyone’.

On the occasion of the Golden Jubilee of Independence and the Year of Mujib, Bangladesh last March invited the leaders of India, Bhutan, Maldives, Nepal and Sri Lanka, except Pakistan, to Dhaka. However, the Prime Minister of Pakistan Imran Khan sent a video message on the occasion. Now PM Hasina herself has invited PM Imran to visit Bangladesh. PM Imran Khan and the policymakers of Pakistan should understand the geopolitical scenario in the region. They should utilize this opportunity because Pakistan needs Bangladesh. Pakistan needs Bangladesh’s support in common international regional forums. Bangladesh is going to become a South Asian economic star. Increasing trade ties with Bangladesh would be beneficial for Pakistan. However, Pakistan needs friends in the region.

After the meeting, the Prime Minister’s Press Secretary Ihsanul Karim told reporters that Prime Minister Sheikh Hasina had told the High Commissioner that South Asian countries should be freed from the curse of hunger and illiteracy and in the work for the welfare of the people of the region, Pakistan and Bangladesh with other regional countries should work bilaterally.

The High Commissioner handed over the original copy of the message of the Prime Minister of Pakistan Imran Khan to Sheikh Hasina. He also gifted a photo album, painting and video footage of Father of the Nation Bangabandhu Sheikh Mujibur Rahman’s visit to Pakistan as the Prime Minister of Bangladesh to attend the 1974 summit of the Organization of the Islamic Co-operation (OIC).

Everyone is monitoring whether Imran Khan accepted the invitation. India in particular is looking into the matter. However, Sheikh Hasina did not announce any date for the visit. Sheikh Hasina is optimistic about strengthening trade relations with Pakistan.