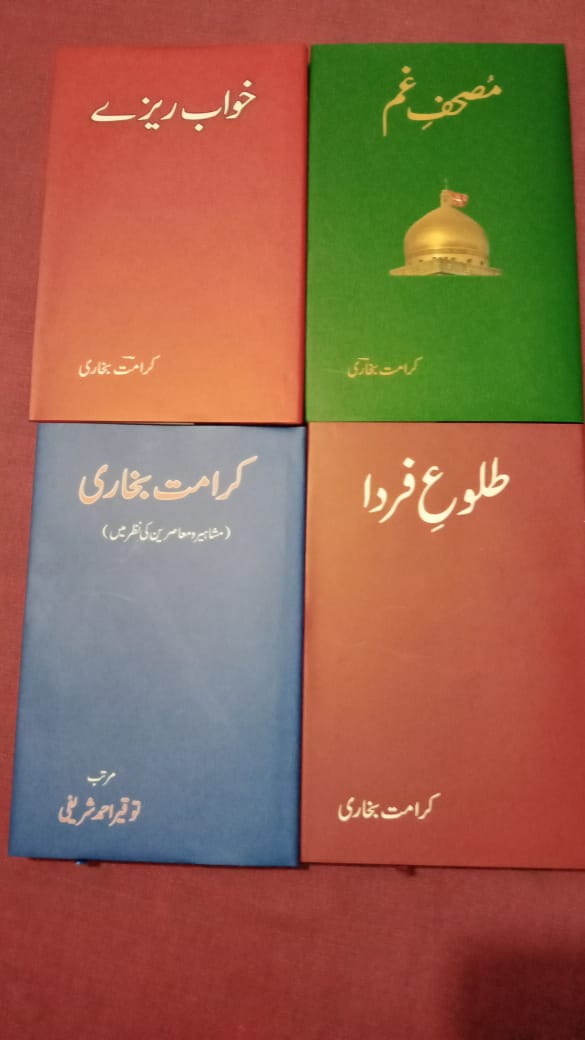 Karamat Bukhari is a well-known Urdu poet and critic. He has to his credit at least nine poetic works in Urdu besides a translated version of his poetry in English viz. ‘Discovering Self’ plus three collections of critical and miscellaneous essays titled ‘Tanqeedi Nazariyaat’, ‘Tanqeedi Ta’assuraat’, and ‘Harf-e-Saad’.

Mus’haf-e-Gham is a collection of Karamat’s devotional-cum-elegiac verse comprising Hamd, Na’at, Salam, Nauha, Manqabat, Ruba’i, and Qat’a. Noted poet and scholar Hassan Askari Kazmi has penned an illuminating preface to the work. He has discussed various aspects of Karamat Bukhari’s art as a versifier in relation to the theme and content of the book.

Karbala is a symbol of Truth, Martyrdom, and Eternity. The poet has soulfully highlighted the events of Karbala leading to the supreme sacrifice of Hazrat Imam Hussain (RA) and his devoted companions. His diction and style match the sublimity and grandeur of the theme.

Khwab Raizay is a collection of Karamat Bukhari’s ghazal (128 in number). Ghazal is a romantic expression of one’s feelings and yearnings. It has a stupendous scope of artistic growth and expansion. The modern poet of ghazal is overly conscious of the grim existentialistic actualities and their incompatibility with his longings and dreams and vice versa. The title of the book itself symbolises this phenomenon.

Tulu-e-Farda is a collection of Karamat Bukhari’s nazm (122) including Hamd, Na’at and Manqabat. He has re-annexed the laudatory flaps of Ahmad Nadeem Qasmi, Iftikhar Arif, Dr. Agha Sohail, and Dr. Sajjad Baqar Rizvi to this book too. However, Tariq Wasifi’s introduction to the poet’s art as a nazm writer is the cream of the piece. It is a scholarly but illuminating review (though verbose at places) of Karamat’s poetics in the context of the present work.

The titles of the poems abound in eponyms which characteristically explicate their themes contoured to the intent of the poet. The contrast between illusion and reality leads the poet to pin his hopes in a future aglow with light, love and luxuriance. But hope, as implied in the title of the book, is elusive like a mirage. Nostalgia of the bygones forms the baseline of many a poem in the collection. And so does remorse over the Prufrockian divisiveness between ‘to be’ and ‘not to be’ eventually culminating into personal distress and disgust. Even romance laced with the silver lining of love would not sustain the poet’s ‘great expectations’. Kis ko awaz dain kis say batain karein/Phir wohi raat din phir wohi aasman.

Dear President Erdogan, I send this open letter to you because it pains me to see a country like Turkey, which could have reached the...
Read more
- Advertisment -