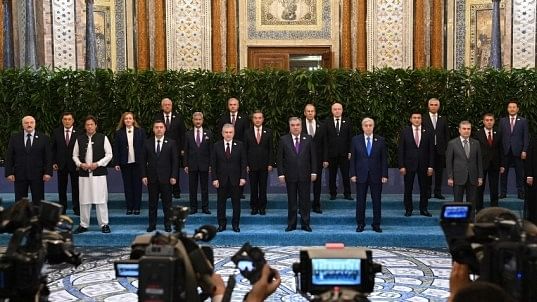 The worsening humanitarian crisis linked to the security situation in Afghanistan and regional peace was the focus of the ongoing 21st Shanghai Cooperation Organisation (SCO) Summit in Dushanbe, the capital of Tajikistan. The SCO is a Eurasian political, economic, and security alliance, which was created in June 2001 in Shanghai.  The hasty withdrawal of US forces  and Taliban rule, has left the world worrying about the future of the country and the security situation  in the whole region.

Pakistan is the most concerned country due to its proximity with Afghanistan. Pakistan is also the country that suffered the most due to the two-decade long war against terrorism in Afghanistan. Over 70,000 Pakistani citizens and soldiers perished during this war. The long war also affected Pakistan economically. According to a safe estimate Pakistan lost $124 billion in these years. Since the last two years, Pakistan has put in all efforts to bring the Taliban to the negotiating table with the USA so as the situation could be stabilized in the war-torn country.

Since the USA attacked Afghanistan in September 2001, as retaliation for the 9/11 attacks, the situation in this part of the region and the Middle East changed greatly. The USA attacked Iraq in 2003 which stimulated initial reversals in Afghanistan. Since then the USA has been scapegoating Pakistan for its failures. The USA tried to withdraw from Afghanistan twice, in 2003 and 2013, but could not. There was a serious disconnect between the US political leadership at home, which wanted to continue war, and the military leadership which was not sure of any success on ground due to faulty policies. The US Administration has been lying to their nation about success in Afghanistan.

The withdrawal after two long years of negotiations with the Taliban has put the peace of Afghanistan in jeopardy. It has also raised many questions. Is it a deliberate act by the USA to put the peace of this region in jeopardy so as to create hurdles for the Belt and Road Initiative (BRI) by China and CPEC which is the flagship programme of the BRI. Humanitarian assistance to the civil population in Afghanistan is a real issue which many turn into a refugee problem for central Asian states, Pakistan, Iran and China, thus creating a serious security concern for the whole region.

Leaders participating in the summit in Tajikistan stressed the need for US attention towards humanitarian assistance in Afghanistan. The UN has also raised the suspicion that if the world did not respond to urgent needs in Afghanistan, the humanitarian issue may turn into a bigger disaster. After taking over areas in Panjshir valley, the Taliban have now announced victory in the whole of Afghanistan and assured the world of inclusive government in Afghanistan. However, the dream for a peaceful Afghanistan is far from over.

India, which was part of the problem during the entire period of war in Afghanistan since 2001, has again started a cat-and-mouse game to destabilize Afghanistan. The two-decade-long war  in Afghanistan owes a great deal to Indian mischievous play and promotion of terrorism in the area. India had been manipulating the situation directly and indirectly  to disturb law and order in Pakistan. Though at the end India has been totally defeated in its nefarious designs in Afghanistan, it has not given up its efforts to promote terrorism and propaganda as a state policy to pursue its foreign policy objectives of hegemony in the region

China and Pakistan, particularly CPEC, are the most affected due to the law and order situation in Afghanistan.

Address of Chinese President Xi Jinpind, at 21stSCOsummit at Doshambe was befitting of a world leader and head of a rising power. President Xi though did not name but was critical of US practices of intervention in domestic political affairs of smaller countries and bullying  habits on the pretext of maintaining world order.

President Xi quoted from history, “Power may win for the time being, but justice will prevail for the long run.” And said that acting from a so-called “position of strength” is not the way to handle international affairs, and hegemonic, domineering and bullying acts should be firmly rejected. In addressing international relations, we should observe the purposes and principles of the UN Charter and the principle of extensive consultation, joint contribution and shared benefits. We need to practice true multilateralism and oppose actions that use the name of so-called rules to undermine the international order and cause confrontation and division, he said. He added that we need to boost mutually beneficial cooperation, remove trade, investment and technology barriers, and promote inclusive development that delivers benefits to all.

President Xi said we should maintain firm confidence in our systems, reject condescending lecturing, and firmly support countries in exploring development paths and governance models that are compatible with their national conditions. He particular;y exhorted the need for not allowing any external intervention in Afghan internal affairs. Reference was visibly to US intervention for shaping internal political affairs of  various member countries for their vested interest.

He said we needed to pursue common, comprehensive, cooperative and sustainable security, and take tough actions against terrorism, separatism and extremism, including the East Turkestan Islamic Movement (ETIM). President Xi said that SCO member states need to step up coordination, make full use of platforms such as the SCO-Afghanistan Contact Group and facilitate a smooth transition in Afghanistan. He also asked member countries to encourage Afghanistan to put in place a broad-based and inclusive political framework, adopt prudent and moderate domestic and foreign policies, resolutely fight all forms of terrorism, live in amity with its neighbors and truly embark on a path of peace, stability and development.

President Xi said SCO countries should stay committed to openness and cooperation, and jointly pursue their shared goal of development and rejuvenation and continue to promote trade and investment liberalisation and facilitation as well as the secure and orderly flow of people, goods, capital and data. To facilitate post-COVID economic recovery in SCO countries, China will continue to share its market opportunities, strive to reach $2.3 trillion in its cumulative trade with other SCO countries in the next five years, and improve its trade structure and balance. China will open a China-SCO Business and Trade Institute to promote business and trade cooperation among SCO countries. As phase one of the RMB30 billion-equivalent special lending facility set up by China in 2018 within the SCO framework will soon be completed, China will launch the second phase of this special lending facility to promote Belt and Road cooperation. Such lending will mainly cover projects related to modernization, connectivity, infrastructure, and green, low-carbon and sustainable development.

Atique Ur Rehman
The writer can be reached at [email protected]