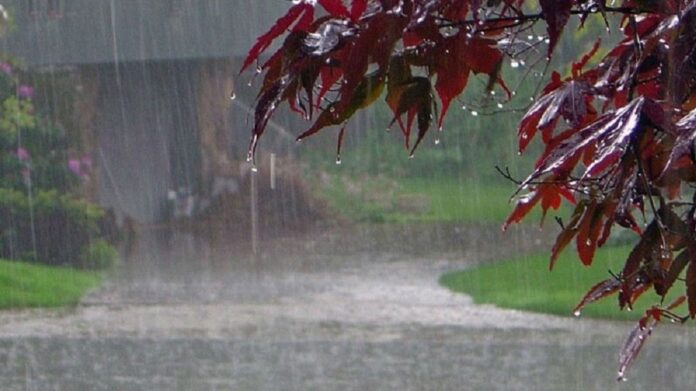 Sharea Faisal, the main thoroughfare that links the city with the airport and National Highway, was blocked with commuters stuck in their vehicles, reported Dawn.

Most roads in the Saddar area and both tracks of the New M.A. Jinnah Road were inundated with rainwater.

As usual, the electricity went off in several areas with the first drop of rain, according to reports reaching from several localities.

The K-Electric in a tweet said “medium to heavy rain is being reported in Karachi. KE teams are on ground and monitoring [the] situation.”

It said some feeders “may be put off due to safety reasons”.

According to a live feeder update tweeted by the power utility, 410 out of 1,950 feeders were affected at 11pm.

It is to be noted that heavy rains and floods have badly affected Chaghi where people are trapped in several localities. The PDMA has dispatched 75,000 ration bags for the rain affectees of Chaghi.

Balochistan’s Chaghi district, particularly Dalbandin area, is sandy and dusty. Trains passing through the area often get stuck when the tracks are covered with sand due to winds.

Earlier on June 19, the goods train service between Pakistan and Iran was suspended after at least six bogies of the train, which was on its way to Quetta from Zahedan city of Iran, derailed near Dalbandin in the Chagai district, railway officials said. No one was injured in the accident due to an unbalanced track which needed repair.

Earlier, the Federation of Pakistan Chambers of Commerce and Industries had asked the government to take practical steps for the restoration of goods trains with Iran and Turkey.

Heavy rains may generate flash flooding in the vulnerable areas of above-mentioned districts during the period. Possibility of damaging effects due to wind-storm during the forecast period during the next 24 hours.

Heavy rains may generate flash flooding in the vulnerable areas of above-mentioned districts during the period. Possibility of damaging effects due to wind-storm during the forecast period during the next 48 hours. Weather prevailed during the last 24 hours; cloudy and rainy weather prevailed over the province.

On the other hand, Provincial Minister for Disaster Management Authority Mian Khalid Mahmood said the flood situation remained under control in the first monsoon spell and no loss of life or property was reported anywhere in Punjab.

In a statement issued on Thursday, the minister said the timely rescue and relief operations have helped to minimize the possible losses and it is satisfying that paraphernalia of PDMA has been ensured up to the union council level to promptly help the people in need. During this period, reports of different incidents were received from Gujranwala, Sialkot, Gujrat and Kasur in which the seven incidents of roof falling have occurred, he said.

Meanwhile, another report about the falling of the wall was collected from Gujrat. Two people have been seriously injured while seven others received minor injuries in a total of eight incidents, the minister stated, adding that an animal has also perished in Sialkot.

The PDMA and line departments are fully active to deal with the situation as the meteorological department did not explicate any significant shift in weather conditions in the next 48 hours, he added. The flow of water in rivers is reported below the flood level, he further said. However, there is a chance of drizzle in areas near large rivers like Lahore, Rawalpindi, Gujranwala and Multan divisions.

The PDMA is also devising a comprehensive policy for the protection of agri lands and localities from rivers’ erosion under the floodplain regulation act, 2016 so that undue interference in the shape of settlement in flood areas will be discouraged, the minister revealed.

He said necessary resources have been provided by PDMA to emergency centres set up at the level of villages and tehsils across Punjab. Meanwhile, the finance department has timely provided resources, he said. Similarly, the agri lands and neighborhoods were being protected from river erosions in collaboration with the irrigation department and local administration.

with additional input from PPI, TLTP