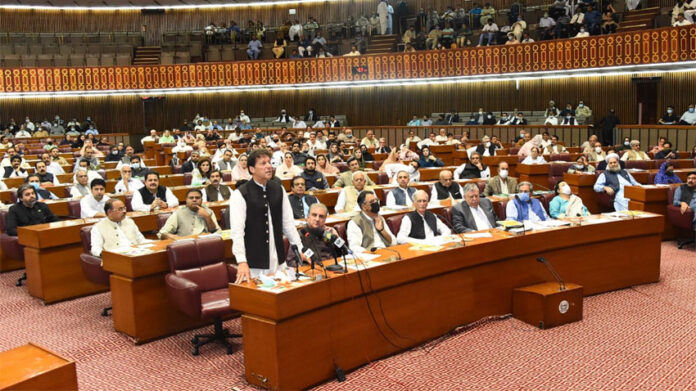 During his wide-ranging speech to the National Assembly, Prime Minister Imran Khan said that Pakistan may partner with the US in peace, but it would not do so in war, leading to desk thumping by the MPs.

“The US was defeated in Afghanistan and they tried to shift the blame of their defeat on us,” said PM Imran Khan whilst addressing the National Assembly on Wednesday, a day after the government smoothly passed Finance Bill 2021-22.

The prime minister said the Afghanis were the brothers of Pakistanis, and that Islamabad knew them better than Washington. “We have decided to not comprise on the country’s sovereignty.”

The premier stressed that Pakistan does not aim for strategic depth within Afghanistan and would respect the decision of the Afghanis, even while the US was trying to force Pakistan to bring the Afghan Taliban to the negotiating table.

He added that Pakistan chose to aid America in the war against terror, adding, however, that the decision had resulted in the capture and imprisonment of their own people in Guantanamo Bay. “Former president Pervez Musharraf admitted this,” he said.

“We sacrificed 70,000 people and wasted $150 billion in the war against terror,” he added, further stating that after the Tora Bora incident, Al Qaeda started its operations in Pakistan.

He recalled how Pakistan had been directed to send its troops into tribal areas to pursue a few hundred people, and how the collateral had resulted in a “hefty price” on the shoulders of the tribespeople.

PM Imran Khan said at the time of the war on terror, Pakistanis were unable to differentiate between their friends and enemies. “Does a country launch an attack on its ally?” he asked.

The premier said that the government at that time — during the war on terror — “did not have the courage to say no to the US and kept on lying to the people”.

“We must understand that when a nation does not respect itself, it is not respected by the world […] we only want peace to prevail in Afghanistan, and that is in our best interest.”

Speaking on the occasion, he said that initiatives in this regard are being taken in different sectors including agriculture, livestock and small and medium enterprises.

The prime minister said that Rs60 billion have been allocated in the federal budget for the uplift of the agriculture sector. Tax exemptions worth Rs100 billion are also being given to enhance the productivity of this sector and ensure food security.

“We protected the crops, and as a result, there was record growth of wheat, rice, and corn,” the prime minister said, adding that the sugar mills made timely payments to the farmers, which helped them invest back into their fields.

“Unfortunately, we have not paid attention to the agricultural sector in the last few years,” he said.

“We also gave incentives to the export industry, and it grew by 17 percent,” he added.

The premier said the government tried to help the farmers get fully compensated. “When the farmers had money to invest, the wheels of economic growth began to turn and we saw a rise in growth rate.”

The premier said Pakistan’s exports hit a record $2.7 billion in June, and the country’s GDP reached 4 percent as the government took important steps to revive the economy after coronavirus battered it.

Rs500 billion has been earmarked to uplift four to five million people belonging to the weakest segments of society, he said while elaborating on the uplift scheme. Moreover, he said the government would provide people with interest-free loans, health cards, and technical training, and they will be made part of the low-cost housing programme.

Commenting on the revolutionary potential of the health cards scheme, PM Imran remarked that the private sector will be fully facilitated and that the government would also allow duty-free import of medical equipment.

Speaking on the Ehsaas programme, the prime minister said 12 million deserving households would be given direct subsidy on the purchase of essential commodities from the utility and general stores.

The prime minister appealed to the people to honestly pay their taxes, as this would help the country move towards economic stability.

“Willful tax defaulters will be put into jail,” PM Imran Khan said on the occasion, referring to the ambitious Rs5,800 billion tax collection target set for the next fiscal year. The prime minister added that this was an ambitious target, but through FBR reforms, the government could achieve it.

Furthermore, he maintained that the Small and Medium Enterprises sector is being incentivised to generate economic activity and provide job opportunities to the youth.

Regarding overseas Pakistanis, he commended them for the record remittances sent and asked them to make investments in different sectors of the economy as well, assuring them the obstacles in their way would be removed.

Prime Minister Imran invited the opposition parties to sit with the government for talks on electoral reforms. This, he said, is important for the future of democracy in the country. He said that it has been his effort over the last two years to bring reforms so that the election results are acceptable to all.

“The time has come to make the country’s elections acceptable to everyone,” he said, adding that in the US, when former president Trump had cast aspersions on the elections, their media and people demanded proof.

“We did the same in 2013. We had asked the then government to hold recounting in four constituencies, and in all four, the rigging was proved.

“After trying our best […] we came to the conclusion that EVMs (electronic voting machines) are the only solution,” he said.

Lauding Minister for Finance Shaukat Tarin and his team, PM Imran said they had presented the budget in line with his vision. “When we had begun our struggle 22 years back, we had one aim in mind: to build an Islamic welfare state — the objective of our founding fathers.”

The premier said if the country steps back from this aim, then there would be “no justification for Pakistan’s existence”.

PM Imran Khan said that the budget reflected the PTI’s three core principles — justice, humanity, and self-sufficiency — and lauded his financial team for ensuring the budget embodies all three.

He also said that the opposition has so far not responded to the reforms proposed by the government. He stressed that the use of electoral voting machine is important to check the irregularities that take place at the close of voting process. He, however, added that if the opposition has some other suggestions on electoral reforms, “we are ready to listen to them”.

The premier recalled that the starting days of the PTI were difficult and they had to make tough decisions. Comparing the situation to when Recep Tayyip Erdogan had come into power in Turkey, even his government took loans from the International Monetary Fund and had to face a tough time for three years.

He commended UAE, Saudi Arabia, and China for helping Pakistan survive during these tough times.

Moreover, the premier lauded National Command and Operations chief Asad Umar, Special Assistant to Prime Minister on Health Dr Faisal Sultan, the Pakistan Army, and others involved in curbing the spread of coronavirus.

PM Imran Khan said Pakistan’s coronavirus situation was better as compared to countries in the region — and it was “due to Allah’s blessings and the poor people’s prayers”.

The premier said inflation and unemployment spiked in countries where lockdowns were imposed, however, “we did not shut down everything and thus saved the people from such ordeals”.

It bears mentioning that multiple opposition leaders were not in attendance during the speech. From the PML-N this included party president and Leader of the Opposition in the National Assembly Shehbaz Sharif, former prime minister Shahid Khaqan Abbasi, former foreign minister Khawaja Asif, and party general secretary Ahsan Iqbal.

Among PPP leaders Chairman Bilawal Bhutto Zardari, former President Asif Ali Zardari were absent, whereas from the JUI Maulana Asad Mahmood was not in attendance.

In addition, 96 members of the Opposition were present in the House during the prime minister’s speech.

PM Imran Khan, paying tribute to the people of Indian-occupied Jammu and Kashmir, said Pakistan stands by them and reiterated that diplomatic relations would not be restored with New Delhi until it rescinds the illegal steps taken on August 5, 2019.